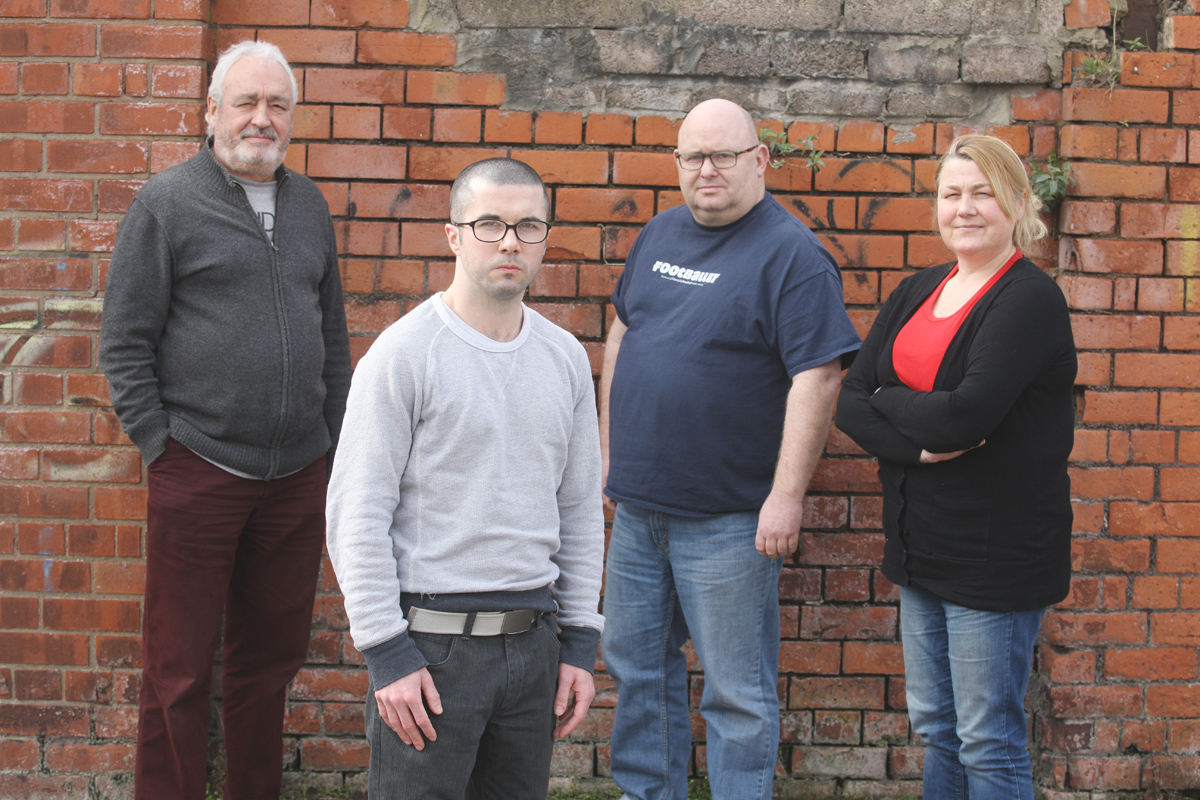 Mel Corry, Seán Byers, Joe Law and Ali McLarnon, members of the think-tank Trademark, which drew up the new report

RACIST ATTACKS in Belfast “show no sign of abating” according to a new report analysing the worrying rise in hate crime.

The report – ‘Racism and Racist Attitudes in Northern Ireland – has been published by the trade union-affiliated think-tank Trademark.

Belfast has earned the unwelcome title of ‘race hate capital of Europe’ in recent years following an increase in verbal and physical attacks on ethnic minorities.

Figures in the report indicate that racist crime in South Belfast is at a seven-year high and a ten-year high in East Belfast, while the number of successful prosecutions remains extremely low.

Last year saw a spate of racist incidents across the city, including the beating of a Pakistani man in North Belfast, an attack on a Nigerian man in West Belfast and a series of racist attacks against eastern Europeans in the East of the city.

The New Year began with two major racist attacks in January including the attempted petrol bombing of a Chinese woman’s home in the Village area of South Belfast and the daubing of racist graffiti on the house of two Pakistani brothers in the West of the city.

Report author Dr Seán Byers spoke to Belfast Daily about the report, which analyses a range of factors behind the growth of racism in the north, including the impact of European integration, the relationship between sectarianism and racism and the lack of political leadership on the issue.

“The trade union movement is intent on treating racism as a social problem with material roots and that’s what the report does,” says Seán.

“While there’s been seven years of consultation on race relations legislation in the north, which is unacceptable in itself, you can’t legislate the problem out of existence.

“Education on the issue is also welcome, but it’s only part of the solution if young people are being raised in communities where problematic attitudes are dominant. We need to challenge racism holistically.”

In addition to the city’s long-established Indian and Chinese communities, since 2004 the accession of eight eastern European countries to the EU saw a growth in the Polish, Lithuanian, and Romanian populations as young migrants arrived seeking work.

With housing generally more available and affordable in aging and de-populating inner city Protestant working class areas of Belfast, many of those recently arrived migrants have taken up residence in these communities.

While many have benefited from the economic and cultural vibrancy brought by these new arrivals, tensions have also been stoked. The rise in racist attacks in the city has been concentrated in loyalist working class areas and last year PSNI Assistant Chief Constable Will Kerr said loyalist paramilitaries were involved in orchestrating attacks.

Seán says that while there is “an ideological overlap between elements of Ulster loyalism and elements of British fascism,” examples of anti-racist efforts within loyalist communities also exist.

“There have also been racist attacks in nationalist areas, so this is a wider issue not reducible to solely a ‘loyalist problem’,” he said.

“There is also good work being done by loyalist politicians and ex-prisoners on the ground to combat racist attacks. However, this is made difficult when there exists such a lack of political leadership within unionism.

“So-called community leaders as well as leading unionist politicians have equivocated when it comes to condemning racism and hate crimes.”

The report rubbishes claims that migrants receive preferential treatment in terms of social security or housing. It argues that in an era of austerity migrants are being scapegoated for the failures of the current political and economic system.

“There’s a need to challenge lies about migrants as well as understand their basis in the current attacks on the welfare state,” he said.

“Elites since the crisis began have sought to distract the attentions of working class people from the banking crash and austerity by placing the blame on the most vulnerable in society including migrants.

“In particular unionist politicians have failed to face up to presiding over a crisis in working class Protestant living standards.”

The report can be accessed in full at http://www.trademarkbelfast.com/wp-content/uploads/2015/03/Racism-and-racist-attitudes-in-Northern-Ireland-web.pdf