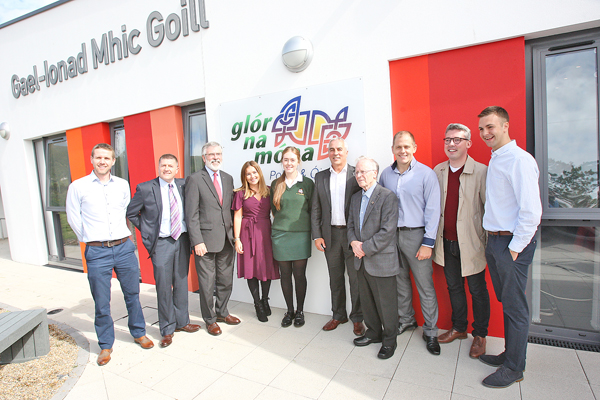 AFTER four years of diligent work and planning, where many challenges and obstacles have been overcome, the doors of the new Gael-Ionad Mhic Goill Irish language centre were officially opened on Tuesday.

Glór na Móna are renowned locally and city-wide as an exemplary youth and community organisation who work through the medium of Irish and who were recently nominated by Belfast City Council Community Services to represent Belfast for the nationwide Pride of Place community awards.

Speaking at the launch Glór na Móna Director, Feargal Mac Ionnrachtaigh, said: “This new centre is the culmination of 12 years hard grassroots work in the Upper Springfield area where Glór na Móna have been pioneering its own unique brand of bottom-up community and youth work practices through the medium of Irish.

“This generation of Irish language community activists are standing on the shoulders of giants, who planted the seed of the contemporary revival in the Shaws Road Gaeltacht revolution.

“They inspired those local parents in our own area to establish two local gaelscoileanna, Bunscoil an tSléibhe Dhuibh and Gaelscoil na Móna, who provide us with a critical mass of young Irish speakers in the area who are driving the development of Glór na Móna.”

He added: “In addition, it was a great privilege for us to name the new centre in honour of, Seán Mac Goill, a Whiterock native and leading contributor to the Belfast language movement and the first efforts at community development and regeneration in the Upper Springfield area in the 1960s and 1970s. Gael-Ionad Mhic Goill will enable us to sustain and further develop a whole range of community services and projects that create ‘Gaelsaolaíocht’ (Gaelic way of life) in the area and empower the next generation to take ownership of the language revival.’

Caoimhín Mac Giolla Mhín, Director of Ciste Infheistíochta Gaeilge, who contributed £137,000 to the project was delighted with the official opening.

“We are so proud to have played our part in this fantastic community project. Comhghairdeas le Glór na Móna who have worked so hard to make this happen.

“This is only the beginning as Ciste are involved in £6.2 million of Irish language community capital projects in West Belfast.”

Also speaking at the event was Sinn Féin President Gerry Adams. Mr Adams expressed his delight at being invited to the event and said he looks forward to seeing the young people of West Belfast flourish as they use this wonderful facility.