Next stop Warrington for ‘The Jackal’ following Jackson win 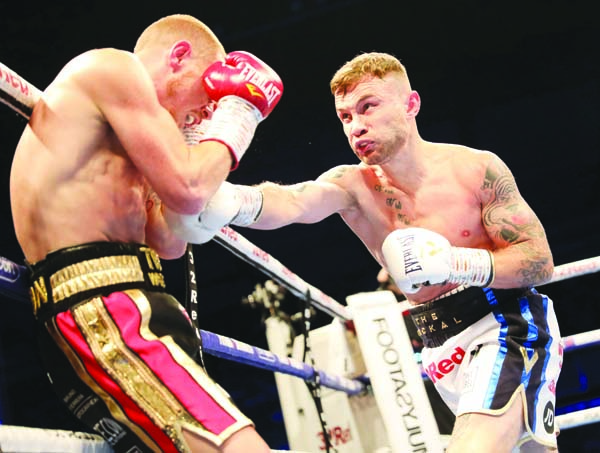 IT’S time to go back on the road for Carl Frampton as a showdown with IBF featherweight champion Josh Warrington was confirmed following The Jackal’s ninth round stoppage win over Luke Jackson at Windsor Park on Saturday, to retain the interim WBO title.
In February 2016, the North Belfast man took 15,000 to Manchester for a super-bantamweight unification against Scott Quigg and the city appears to be the destination once again for the meeting between the pair, likely before Christmas in what is “a dream fight,” according to promoter Frank Warren.
It was another dream that became reality for Frampton on Saturday as over 24,000 packed into Windsor Park for what proved to be a quite special occasion as their favourite got his wish to box at the stadium and used it as an opportunity to score his first stoppage win since February 2015 against Chris Avalos.
In truth, Jackson was way out of his depth and that was apparent early on as Frampton dominated from start to finish before Jackson’s corner mercifully pulled their man out after 1.21 of the ninth with him being thumped around the ring.
Frampton was of course delighted with how things worked out on the night – a cut over his left eye from a head clash the only blemish as he delivered on the stage he always dreamed of.
“I don’t want to do Luke a disservice, but I felt like I was a step above and felt I was able to read things and see things,” he said afterwards.
“I did what I had to do and the towel came in. He was a tough wee man.
“I hit him with a body shot before I dropped him and I don’t know how he stayed up from it. He winced and I felt it when I landed that it was a good shot, but he stayed there.
“People were talking about Warrington, Valdez and what have you. I was asked the questions and I answered them, but I never took my eye off Luke Jackson.
“He was talking about me being complacent and overlooking him, but I think that was a comfort blanket for him. He wanted to believe I was overlooking him, but I didn’t for a second. I trained very hard and was flying here at the end.”
The immediate future appears certain as the Warrington match was confirmed in the aftermath of Saturday’s win and that should be a quite incredible occasion with Frampton and Warrington both boasting loud and passionate support.
In winter months, of course, this has to take place indoors with Manchester and London the only cities with arena capacities suitable for such an event.
The former is more logical choice given it would be easier for both sets of fans to travel to.
Those details will be ironed out in the coming weeks, but what is certain is that Frampton will fight for the IBF featherweight title and that is a match-up that appeals.
“I’m excited for it,” he confirmed.
“My fans are going to be excited for it and his are too. I think the atmosphere will be electric and one of the best atmospheres in world boxing ever.
“I know that’s going to be a different story (than Johnson).
“Josh Warrington is going to be a different task altogether. I think he’s riding on the crest of a wave, coming off the biggest win of his career against (Lee) Selby.
“It’s a good fight, not an easy fight, but I believe it’s a big fight in the UK and Ireland.”