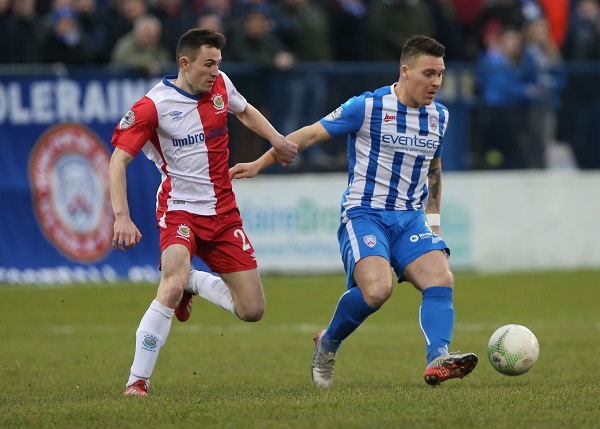 Linfield lead Coleraine at the top of the table by four points with the NIFL proposing all teams play just two further games to complete the 2019/20 campaign © INPHO/Brian Little
The NI Football League's Covid-19 Steering Group has proposed that the Irish Premiership season be completed by playing two more rounds of games, following a meeting last night (Tuesday).

The proposal will see the League completed with each team having played one another three times, completing the pre-split fixtures and ending the season based on those standings.

The alternative option is to end the season immediately and base the final standings on a mathematical formula to determine all league placings, which appears to be the preferred option of the majority of clubs.

With Linfield four points clear of Coleraine at the top, it is likely The Blues will retain the Gibson Cup, but much will depend on which clubs reach the money-spinning Europa League Qualifiers.

The NIFL received confirmation from UEFA that the deadline for the nomination of clubs for participation in UEFA Club Competitions would be August 3, alongside confirmation that the IFA was exploring a return to football from week commencing July 20 to conclude the Irish Cup. With the clear reluctance of clubs to conclude their remaining fixtures behind closed doors it was considered that an alternative sporting model should be considered.

Clubs have until Thursday to reach a decision on how the Premiership will conclude, while a decision on the start of the new season will be subject to further consultation with the IFA and clubs.

"The Steering Group advocates that the most reasonable, proportionate and fairest solution in the interests of the League would be to conclude Season 2019/20 Premiership campaign in a condensed format with all ‘pre-split’ games being completing to ensure that each club has played each other three times," read a statement.

"The alternative recommended option is to curtail the season immediately and adopt a mathematical model to determine all league placings. Such a mathematical model would be developed and implemented by an independent panel, appointed by the NIFL Board, and must ensure as close as possible that Sporting Merit is achieved as required by UEFA."

"The Steering Group has appraised numerous options available to either resume or curtail the current season against the key principles of health, finance and sporting integrity alongside the impact on the football calendar and timeframe.

"Throughout the process, the Steering Group continued to recognise that the optimum option to ensure sporting integrity would be to conclude all matches in each division. The Steering Group was challenged by each option as they all impacted the key principles in their own specific way but has endeavoured to provide recommendations in the best interest of the NI Football League."

The Steering Group has also recommended that both the Championship and Premier Intermediate divisions end immediately with a mathematical curtailment option to decide final placings, with promotion and relegation open to teams in the automatic positions only, meaning no playoffs for those sitting second or second bottom.

It is hoped the Women's Premiership can begin at a later date when safe to do so, while the Development and Academy Leagues will be determined through the mathematical curtailment system.