Officials recall defence of the Falls on 50th anniversary of Curfew 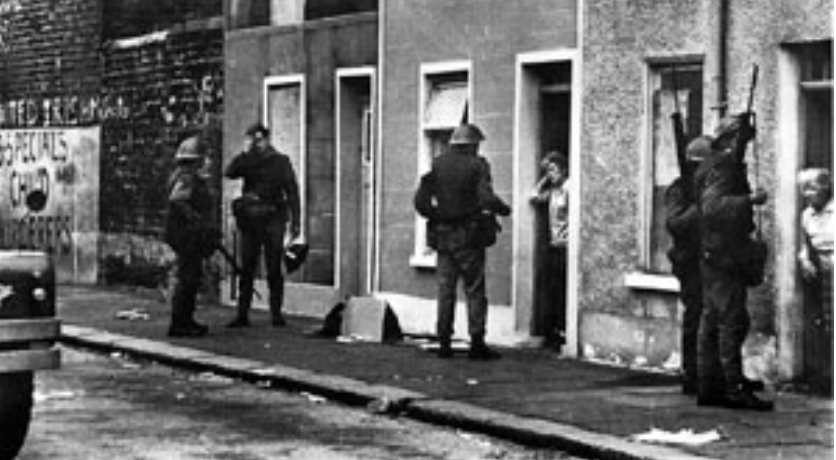 This is the 50th anniversary of the Falls Curfew, July 3-5 1970, the biggest single engagement between armed Irish republicans and the British army since 1916. 2,500 troops from a number of regiments against the small IRA, na Fianna Éireann and Cumann na mBan units on the Falls Road.

The excuse for this pre-planned attack was a search for weapons at Sean Maguire’s home. As the search ended, young men, incensed by the search, attacked the British soldiers with stones and petrol bombs in Albert Street.

The British responded with a salvo of CS gas and baton charges. Paddy Corrigan was one of the first arrested. The British fired thousands of rounds of live ammunition and 1,600 canisters of gas. Large catapults were used from the back of Land Rovers to launch salvoes of 10-inch CS gas canisters into the area. Many went through the roofs of houses, gassing women and children. A soldier later recalled in an interview: “The Falls was saturated with CS gas. Children were coughing and crying. I remember the kids, the gas affected everyone, but children especially.”

Four civilians were killed by the British, Charles O’Neill, William Burns and Patrick Elliman – all local men – and Zbigniew Uglik, a 23-year-old Polish man. None had any connections with Irish republicans. It was the first ‘massacre’ of civilians in the ‘Troubles’ The fact that the RUC made no attempt to investigate the killings and woundings led directly to the subsequent massacres in Ballymurphy, Springhill and Derry. The family of Mr Elliman was visited by the RUC two days after the curfew. They asked them to come to the station and make a statement, which they did. They never heard from the RUC again.

Just a year previously the RUC had machine-gunned our community with Shorland armoured cars in consort with unionist mobs, killing Patrick Rooney (9). No police were ever charged and not one soldier has served an hour in prison for any of these murders. The pattern for state murder was set.

A plaque on Northumberland Street erected by the Official Republican Movement depicting 'The Falls Curfew' of 3–5 July 1970. Photo Sept 2017 pic.twitter.com/TxqlBbcDtY

A decision had been made by Belfast IRA commander Billy McMillen to remove large quantities of arms from the area. He knew the troops would launch a a bigger raid and, together with his adjutant, Jim Sullivan, instructed members of Cumann na mBan to remove the weapons. This was put into operation by Billy Sullivan and Oliver Quinn, commanding D Company, 3rd Battalion, Belfast Brigade, the IRA unit in the Falls area. The volunteers also realised they would have to fight and made preparations to confront the troops. An IRA source said later: “The way we looked at it. we were not going to put up our hands and let them take our weapons. We didn’t want confrontation, but we wouldn’t surrender.”

Women from the Cumann na mBan – Margararet McCorry, Margaret Green, Eilish Mateer, Phyllis Boyle and Mary Hughes – together with others began moving weapons to Divis Flats, Ormeau Road, Clonard and Beechmount before the cordon of troops became effective. As Phyllis was moving a pramful of weapons towards Divis escorted by ‘Jonesy’, the muzzle of a rifle popped up just as a soldier turned round. Phyllis pushed the rifle in and said, ‘Don’t you dare throw that toy out.” Jonesy’s face turned red. In another incident, two woman at the bottom of Leeson Street couldn’t get a pram laden with munitions up a high kerb. A soldiers stepped forward and said: “Let me help you there, missus.” These same woman bravely marched with others down the Falls to break the curfew on Sunday morning.

At approximately 6pm as troops moved in from the main road, a squad of volunteers, led by Paddy McCann and Bap O’Neill, opened fire in Balaclava Street. Smokie Wylie and other volunteers took up positions on the roof of Raglan Street and Getty Street schools. This offered good sniping points up and down Leeson Street and down to the Raglan Street and Cyprus Street, where troops were massing. Volunteers Danny O’Neill, Joe McCann and James Corrigan moved out with weapons from the back of Michael Dwyer's GAA club and took up positions in Varna Street and Grosvenor Place. Danny was wounded on the Saturday morning.

Later in the Dwyer’s club, Billy McMillen, Andy McAnoy and Una O’Neill were captured with a large quantity of arms. Andy’s brother Liam, together with Francie Scott and and Joe Hughes from the Fianna were deployed to Panton Street. Liam was run over by a Ferret scout car during the gun battle on Sunday morning and arrested. Quite a large number of the fighters were young members of the Fianna. This included Bimbo Robb and Sam Smith, who were position on Garvey’s roof in Grosvenor Place. Both were captured with automatic weapons on Saturday morning and badly ill-treated. Robert Mateer, Paddy McGeough and Jim Pollock were positioned in Osman Street as British snipers opened fire from Divis Flats. They took refuge in Jim’s mother-in-law’s house.

Whatever positive role the arrival of the British troops had on the streets of Belfast and Derry in 1969, the sheer brutality of the British army during the curfew sowed the seeds of decades of violence.

Although the Falls Road remained sealed off, by midday on Sunday, July 5, women had begun to gather at various points in the city in order to march on the Falls. The curfew was broken when over 3,000 women of all shades of political opinion and none marched to the British lines with food and groceries for the people. The unprepared soldiers tried to hold back the woman at first using batons, but they pushed on. This was a special breed of women, toughened by their lived experience.