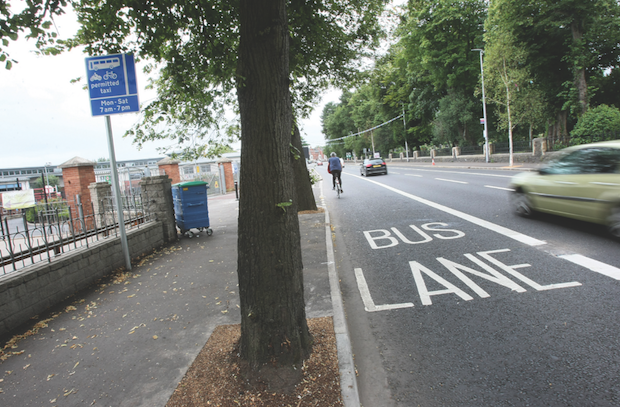 ANGRY PARENTS have critcised the Department for Infrastructure for prohibiting their routine parking at a local primary school to facilitate the Belfast Rapid Transit system (BRT), due to launch at the beginning of the school term.
Schools and businesses along the routes are growing more and more concerned as street parking became a 12 hour bus lane along the stretch of the Falls Road from Divis right up to Colin in recent weeks. Forced into already congested side streets or having young children face the elements are some suggestions put forward by the department to parents prohibited from parking in the new bus lanes. One parent told the Andersonstown News the suggestions put forward by the Department for Infrastructure encouraging more sustainable transport to schools are not viable for most working parents. “As a full time working mum of two young boys, one who attends St Kevin’s School and the other I drop off at a relative’s house most mornings, I feel the new bus lane implementations will be an inconvenience for a lot of parents,” she said. “Parking is almost impossible around this area, the side streets are residential and already have cars parked on both sides of the street and the car park at St Kevin’s is for staff, it’s quite small and would not hold anywhere near the number of cars that would usually use the inside lane to drop off and collect their children. I have two stops to make in the morning before I arrive at work and if it was viable for me to walk or cycle in the mornings I would, but it’s not and I don’t think the whole process has been thought through realistically.”
People Before Profit Councillor Matt Collins said their office has been inundated with calls from concerned residents, including parents from the school calling on political parties to ‘sit up and listen’ to those concerns. “This represents a shambolic example of bureaucratic planning,” he stated. “It must be asked why none of these problems were taken into consideration when these plans were initially drawn up? We have been in touch with many residents who are concerned about everything from school runs, parking in their area, and the more general build-up of congestion that is gripping west Belfast. Their voices must be heard. Investment into public transport is welcome, but it should be done properly and I would appeal to the department to engage with the wider west Belfast community on this issue. It’s also time for the big parties to sit up and listen to people’s concerns.”
A spokesperson for the DFI said: “The new Belfast Rapid Transit bus lanes operate between 7:00am and 7:00pm, Monday to Saturday,” they reiterated. “They are clearly marked by solid white lines on the road and blue bus lane signs. Anyone who drops off or collects pupils from school should be aware that they are not allowed to drive or stop in the new bus lanes during their hours of operation. However, there are gaps in the bus lanes to allow access to side streets. The Department asks everyone, including pupils, to take extra care until they are familiar with the new arrangements.
“The Department is working to encourage more sustainable transport to school, including walking and cycling. The Department’s Road Safety Team will be contacting all primary schools along the BRT route offering to come along and speak to pupils and staff about safe, sustainable travel to school.”