Personal story will bring the house down 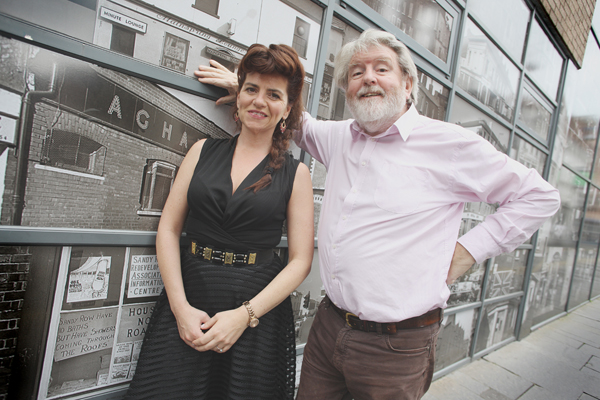 IT has received standing ovations from audiences from the Edinburgh Festival to the New York Irish Festival and is just weeks away from its first appearance at the Grand Opera House in Belfast, a city where its journey first began.

Set in Belfast ‘Two Sore Legs’ by Ballymurphy playwright Brenda Murphy tells the story of Bridget, a young Butlin’s Redcoat who had six children by a married man. The play explores the scandal, the pain, the joy and the fall-out from this extraordinary family arrangement.

The play’s rave reviews owe much to the outstanding performance of actress Maria Connolly, who stars in the role of Bridget. Maria, who is from the Antrim Road, said she fell in love with the character of Bridget.

“A one-woman show is one of the toughest gigs you can do,” she said.

“I remember getting hold of the script and I started weeping. I immediately felt very emotionally attached to the play and to Bridget.

“Bridget has six illegitimate children to a man from around the corner and for that to happen in the 1950s was just unheard of.

“She is a powerful woman with unbelievable strength –  I’ve nothing but respect and love for her.

“It’s a story of love between your children, human beings told with humour and trauma. It’s one of my favourite pieces to perform,” she said.

The 43-year-old has played the character on and off for the last three years and says she can’t wait to perform at the Grand Opera House.

“I did it last year for ten weeks in a row and couldn’t believe how I sustained it. Emotionally, it wrecks me.

“It’s just fantastic to bring it to the Grand Opera House. It was very popular in America and Edinburgh, so Bridget’s story is going to travel internationally. Her story connects with everyone – you don’t need to be from Belfast.

“The audience can expect lots of laughter, a few tears, a great story and a great night out,” she added.

The growing reputation and popularity of ‘Two Sore Legs’ owes much to the guidance of Green Shoot Productions and Director Martin Lynch.

Martin, who grew up in York Street before moving to Turf Lodge describes ‘Two Sore Legs’ as a world-class piece of theatre.

“I left school at 15 with no qualifications before moving to Turf Lodge in West Belfast,” he explained.

“In the mid-1970s I saw my first play in Turf Lodge about James Connolly and I instantly became attracted to sketches and plays. Theatre was a new thing and I thought it was fantastic.

“I have been writing professionally since September 1980 but ‘Two Sore Legs’ is a play that grabbed my attention straight away.

“We got it expanded to improve it from the original script. It’s a world-class piece of theatre and the writing is powerfully beautiful. You don’t get any better than Maria Connolly’s performance.

“The themes in the play are about family and love. Brenda’s mother ended up having a ten-year affair with a married man which threw up a lot of powerful and humorous situations.

“There are two visits by a priest to the mother which has proved incredibly humorous with audiences.

“The story is coming home to the Grand Opera House after being in Edinburgh and America. It’s a Belfast story and I think the bigger the audience, the better the reaction,” he added.

Two Sore Legs will be showing at the Grand Opera House in Belfast from Monday 3 to Saturday 8 October. Ticket prices range from £16.50-£25.