Peter and his team work hard to build up vital relationships 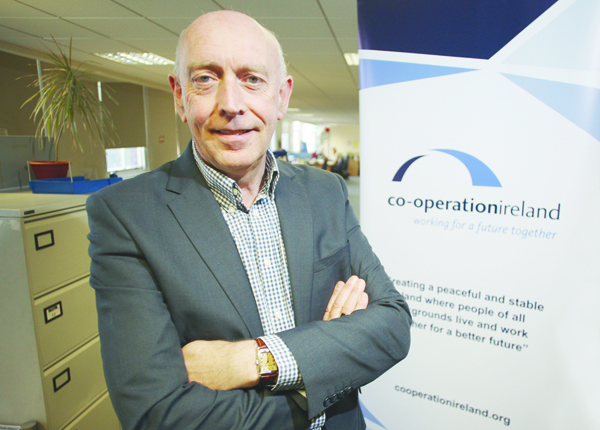 WORKING for a future together – that’s the motto of all-island peace-building charity Co-operation Ireland.

The charity was started in 1979 by County Clare man Brendan O’Regan, a businessman who is best known for developing Shannon Airport and inventing the Duty Free shop.

By the 1960s he was concerned at the outbreak of the Troubles that links between north and south would suffer, so to counter that he set up the charity Co-operation North that later become Co-operation Ireland.

Today, the charity is led by Chief Executive Peter Sheridan, who joined in 2008 after 32 years in policing in the North. Peter, a former Assistant Chief Constable with the PSNI (formerly RUC), was responsible for the Crime Operations Department, which included serious and organised crime investigations.

Peter explained the work of Co-operation Ireland, including their local involvement in North Belfast.

“Currently the charity operates a range of programmes to help develop relationships between both communities in the north and on a cross border basis,” he said. “We also run programmes that involve young people in London so maintaining relationships across the Irish Sea are also central to what we do. Everything feeds into our mission to foster peace on the island of Ireland.

“In North Belfast we run programmes with Ardoyne Youth Club and R City. Young Advocates is a new programme with Belfast City Council and Co-operation Ireland, funded by the SEUPB, that seeks to equip young people to be leaders of the future and advocates for peaceful change by championing issues across the political divide through rights based campaigns.

“We also work to build capacity within the PUL community. Our LEGaSI programme works to identify leaders and empower them through providing support for community based initiatives, one of which – Listening Ear – has featured in the North Belfast News.”
Co-operation Ireland works to promote and encourage interaction, dialogue and practical collaboration between people in the north as well as between the north and south.

Their vision is of a peaceful and stable island where people of all backgrounds live and work together for a better future.

However, the charity is faced with constant challenges that they need to overcome to continue their work.

“A major obstacle is ongoing paramilitarism,” explained Peter.
“The fact that 25 years after the agreement was signed we still have people who see violence as a way forward is a huge issue.

“The deadlock at Stormont obviously has an impact but we are still able to continue our work.

“Our vision is for peace in Ireland and that is what we work towards every single day.”