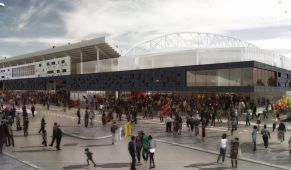 Sinn Féin West Belfast MP Paul Maskey has welcomed a commitment by the Planning Service to make a recommendation on the planning application for Casement Park to the Minister for Infrastructure by the end of summer following a meeting between Sinn Féin and the planners.

He was speaking after leading a delegation today to meet planners. North Belfast MP John Finucane and the Sinn Féin MLA and party sports spokesperson Sinéad Ennis also attended the meeting to discuss the long-awaited planning decision on the redevelopment.

“We sought assurances that the project will be prioritised and that the planning recommendation will be made before the end of summer," said Paul Maskey.

“I was delighted that the planners were in a position to confirm that they anticipate the recommendation in the next months. The Casement Park project is already far too long overdue."

The Sinn Féin man said he would continue to work with the GAA to deliver the Casement Park project. Since the pledge to rebuild Casement Park was made, both soccer and rugby have built stadia.

The time for action is now @deptinfra

What a timely boost this would be to our county in these uncertain times.

When our games stopped due to the pandemic our people didn’t.

Antrim GAA continue to make an enormous contribution to all communities. #ItsTimeForCasement pic.twitter.com/fF7Vf3J3if

“Sinn Féin will continue to work tirelessly with the GAA, relevant governmental departments and the local community to ensure a new state of the art Casement Park is delivered," added Paul Maskey. “I remain absolutely determined to see the final part of the stadium jigsaw completed and will do all in my power to bring about the realisation of a new and modern fit-for-purpose Casement Park built in the heart of West Belfast.”

The last game played at Casement was in July 2013 but the project has been mired in controversy even before then after some local residents, led by the Mooreland and Owenvarragh Residents’ Association (MORA), objected to the plans for the stadium — which originally were for a 40,000 capacity venue.

At that time, our sports editor Conor McLoughlin wrote: "Casement Park is in terrible, terrible condition, and that’s just what we could see with the naked eye. Japanese Knotweed – a powerful and voraciously invasive plant that undermines the foundations and the very strength of buildings – is rife and the truth is that it can only be successfully treated and eventually cleared through demolition. Any suggestion that we should just persevere with this 60-year-old building in its current form can only come from people who do not bring their kids to matches there and who have not played or seen their club in action in the decrepit old stadium. It’s time to say goodbye to Casement Park as we know it."