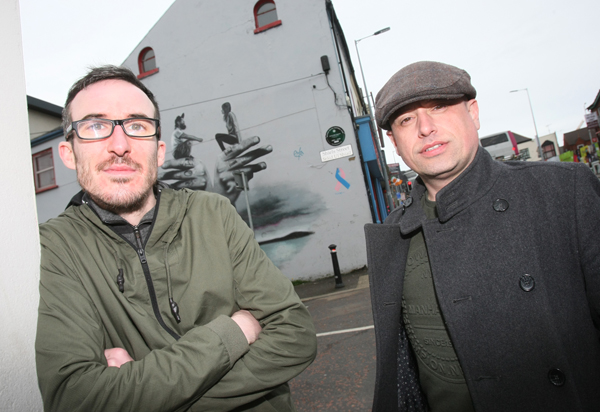 Tony Devlin of Brassneck Theatre Company along with Ciaran Nolan of The Balloon Factory join forces for the production of Man on the Moon which will be performed at the Mac Theatre from the 8th May.

ONE of West Belfast playwright Pearse Elliott’s most recognisable works is set to welcome back cast and crew as Man in the Moon returns for one week only.
Debuting at the MAC theatre in May, the one-man show starring local actor Ciarán Nolan, a long time Elliott collaborator, tells the story of Seán Dornan, a man who has been sacked from dead-end job – one of around 15 jobs he’s been fired from. To further add to his woes his girlfriend has left him, taking their child with her and the bank has just repossessed his home. The audience finds Seán alone at the Half-Moon Lake in the heart of the Lenadoon estate, pondering the direction his life has taken.
“We premiered the production back in 2013 at the Roddies,” explained Ciarán. “We toured the Opera House’s Baby Grand, the Waterfront, the Lyric and then took the show to New York. This is a collaboration between The Balloon Factory and Brassneck under Tony Devlin’s direction and we are delighted to be bringing Seán’s story to the MAC,” he said.
“As many people know, The Balloon Factory usually have their shows on around the Christmas period, this was a chance to do something a bit different in terms of scheduling. The play deals with the affects of mental health, which is rife in our society. It has by no means gone away, if anything it’s in a worse position due to health cuts.
“The issue of mental health could hit us at anytime. It’s frightens the life out of me. There is not one profile, or one fits all suit as such, for what someone battling mental health looks like or for someone who is contemplating taking their own life. No-one has the monopoly on it.”
Director Tony told Daily Belfast how the character of Seán is very much a “throw a stone type character”.
“He’s your average West Belfast lad, his relationship has broken down, he’s back living with ma, he loves his mates, he love his brothers. He comes to the ‘Halfie’, the Half Moon Lake to reflect on his life, the life of his mates, some of whom have taken their own lives and thinks of what really could’ve been.”
Tony continued: “When Ciarán came to me with the idea of doing a joint show as such, this was last autumn, and a very good friends of ours from Downpatrick, Marc O’Shea, had taken his own life and there were three other actors who had done so in the industry, it was so hard to take in and such a loss. We have been told before that this play ‘saves lives’ and hopefully will continue to do so. We are putting the show on during the first week of May, which is Mental Health Awareness month so it’s very fitting.
“The beauty of Pearse Elliott’s writing in this play is when the uppercuts come, they come and hit hard, very hard. But Ciarán takes Pearse’s words and lifts them, it’s very much a rollercoaster of emotions, there are highs, laughs and lows.
“Audiences have been brilliant and their reaction to the work has always been fantastic. I know there are people who are coming to the show with a fresh pair of eyes and I can safely vouch on behalf of all involved that they are in to see something very special.”