Putting neighbourly actions at the art of university ethos 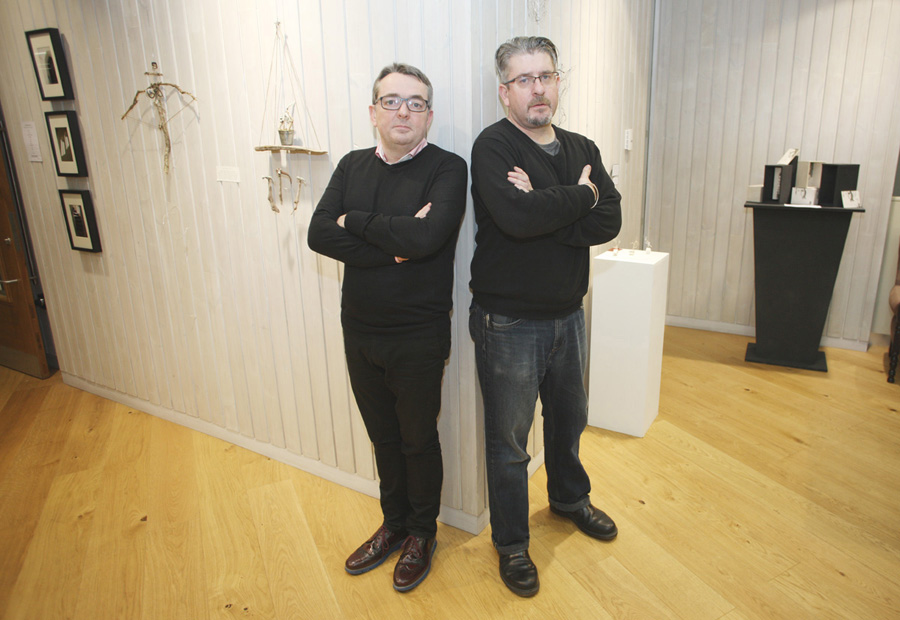 The opening of an art display by University of Ulster students in North Belfast is the beginning of a new chapter that will see the institution engage with local people for years to come.

That is the prediction of Professor Paul Seawright who spoke to the North Belfast News last week at the opening of an exhibition in the Duncairn Centre for Culture and Arts.

The gallery is being used by the university to showcase the work of second year applied arts students who will be marked on what they have produced for their summer exams.

The artwork includes ceramics, jewellery and silversmithing and is open to the public.

Paul said building on “already strong relationships” in North Belfast between local people and the university was central to what they were trying to achieve.

“Of all the schools in the university we have always had a fantastic relationship with the city, and all parts of it - not just the city proper but also the communities because that’s what art does. The north of the city and the west of the city have traditionally been very interested in the visual arts and art and design and there are lots of initiatives going on. East Belfast is starting to catch up and we have been a part of all of that.

“Most arts organisations in the city are run by our graduates so from the museum right down to arts groups there are Belfast School of Art graduates.”

Paul’s colleague Michael Moore said the exhibition had previously taken place in Lisburn, but they had wanted a location in Belfast to allow people living near the college to see what the students produced.

“In the past we used the R-Space Gallery in Lisburn but we wanted to do something in Belfast because it’s important to us to work in the neighbourhoods. It’s as much about the people around the corner from us as it is about the people in the province and on the entire island, so when we were preparing for this year’s exhibition a colleague of mine, Tim Kerr, suggested I come and have a look at the Duncairn Centre for Culture and Arts as a potential venue.

“So what I did deliberately was walked up here. I know the area but didn’t know the Duncairn so I walked up and had a discussion and it didn’t take long to see the Duncairn was a perfect fit for us.”

The centre was able to provide the exhibition space for free due to it being funded to attract exhibitions that allow working class people to engage with artistic endeavours.

This objective allied with the close location of the Art College in York Street has provided the foundations for a burgeoning relationship.

“We, as a university, are very conscious of the fact sometimes institutions can ignore their immediate neighbours,” said Michael, “and I know people who live nearby who are concerned at what will happen to their streets with 8,000 students about to land in. But I can confidently say through experience that my employer takes a very serious view and a very sensitive view of the impact we will have on this part of Belfast.”

He said they were aiming to develop a lasting commitment to North Belfast.

“We run a placement programme within second year where some students take a work experience year. We do that in Denmark and Hungry and, talking to the Duncairn, they say they are very keen to take a placement so we are looking at putting two students in here for a year to work on a volunteer business.

“When we place students here they might do workshops for children. For example, you already have a fiddle maker who is also a painter and we’d quite happily have a day teaching kids how to make ceramics, making jewellery - all of that stuff because we’re very interested in working with communities.”

Duncairn Events Manager Ray Giffen said they were excited about the future.

“The Duncairn’s role as both arts producer and receiver has been key to the success of the past year and getting the University of Ulster along is another fantastic development.

“We will continue with this strategy by building upon existing partnerships and developing new relationships with other arts providers and organisations, to ensure that the centre provides the North Belfast community with access to as wide a variety of arts led events as possible.

“In our capacity as an arts receiver we will work closely with and offer heavily discounted hire rates and, whenever feasible, free hire of the facilities to partnering arts providers.”

The exhibition runs until May 14.