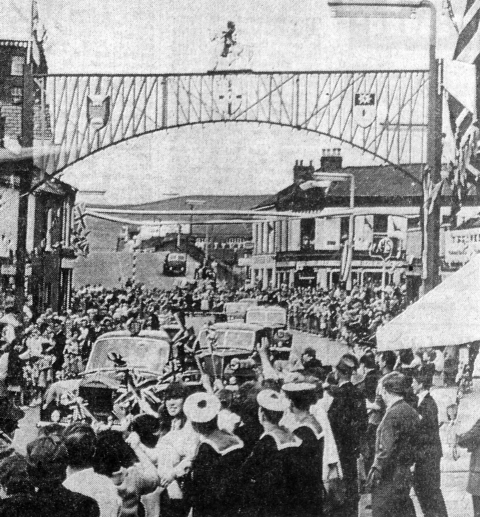 WELCOME: Excited loyalists greet the royal cortege as it makes it's way through Sandy Row

As I write this the Queen of England and the Duke of Edinburgh are in Bushmills. The royal visit was overshadowed by the homecoming of the province’s soccer team. They were greeted by thousands of fans while the queen arrived almost unnoticed. The Secretary of State was busy furthering her political career in London so she delegated the meet and greet formalities to others. By the time you read this Mrs Windsor will have left these shores and the visit will be largely forgotten.

Almost exactly fifty years ago the English monarch and her husband were scheduled to complete a similar two-day visit. Things were very different then and the visit hit the headlines. In March 1966 Eric Lubbock, Liberal MP for Orpington, asked the Prime Minister what advice he had given Her Majesty the Queen about a visit to Northern Ireland in July?
Harold Wilson’s reply was brief. “None.”

On June 28, less than a week before her arrival here, Lubbock asked if the Prime Minister “will now tender advice suggesting that the visit be cancelled?” The reply: “No, sir.” Lubbock: “Is the Prime Minister aware that many people, both in Britain and in Northern Ireland, feel that a visit by Her Majesty to Northern Ireland is not wise at a time when disorders are being fomented and murders being perpetrated by a gang of neo-Nazis in that part of the Kingdom?”

The month of June 1966 had seen considerable unrest here. On June 6 Ian Paisley had led a march from East Belfast to mount a protest at the opening of the Presbyterian General Assembly in the city centre. Trouble erupted when they were stopped by hundreds of youths on the Albert Bridge. The RUC beat the protestors off, but in Cromac Square a short but vicious riot developed. When the marchers reached the Assembly building at Fisherwick Place they mocked and foul-mouthed Lord Erskine (Governor of Northern Ireland) and Lady Erskine and attempted to storm the building. On Saturday, June 11 John Patrick Scullion died in hospital. At first it was thought he had been stabbed but it was later established he had been shot by the UVF.

Throughout June tensions were high and in the early hours of Sunday, June 26 Peter Ward was shot as he emerged from a public house in Malvern Street where he and other hotel barmen had gone for a late drink. Three men – Gusty Spence, Hugh McClean and John Williamson – were arrested. When arrested and cautioned in Brown Square police station McClean said: “I am sorry I ever heard of that man Paisley or decided to follow him.”

With the Queen’s visit just over a week away Belfast was now the focus of unwelcome worldwide media attention. The Sunday Times carried the headline: ‘John Bull’s Political Slum’. The article described what it called “the underlying sickness that will remain after the loyal cheers die down. The loyal cheers should not be allowed to soften a very hard line on Ulster.”
I lived in a flat in Wesley Street then, just off Sandy Row, and I remember seeing slogans freshly painted on gables in Stroud Street and Blythe Street: ‘Kick the Pope’; ‘God Bless Paisley’; ‘God Save the Queen’ and ‘SRRS’. I was happy that we had just given up the flat when I learned that this was ‘Sandy Row Revenge Squad’.

The purpose of the Queen’s visit was to open a bridge over the Lagan. The naming of the bridge led to controversy. Some wanted it to be known as Carson’s Bridge but it was later agreed to call it Queen Elizabeth II Bridge (not to be mixed up with the Queen’s Bridge!) As we were taking the Heysham boat that night on our way to work at Wembley for the duration of the World Cup, we remained indoors, not daring to go near the window which overlooked the Donegall Road as massive crowds gathered to greet the Queen. However, one of our flatmates watched the royal procession and saw the “incident” in Great Victoria Street.

The entourage was travelling from the City Hall via Great Victoria Street and Sandy Row on its way to Hillsborough. As it passed through Donegall Square South a woman threw a bottle at the Queen’s car but missed. Two minutes later as the car passed a building under construction in Great Victoria Street a cement block landed on the bonnet of Her Majesty’s car. The driver braked but the detective aboard ordered him to drive on. An excited mob vied with the RUC to enter the building after a man was seen on the roof. A police statement issued later said a man with a Belfast address and a woman with a Salford address had been arrested.

I don’t know whether the slogans on the gable walls were visible when Her Majesty passed along Sandy Row but doubtless she would have been impressed by the Orange arch. As the crowds subsided we exited the flat in Wesley Street, handed over the keys to the estate agent in Shaftesbury Square and made our way to the Liverpool Bar to while away the time before boarding the Heysham boat. On arrival at Euston Station next day we saw the headlines: ‘Queen Attacked in Belfast; Her Majesty Dices with Death’.

I’m told that this year’s visit is her 25th. I’d imagine she would say that 24 of them were humdrum.