Reassuring words at Féile from a champion of justice 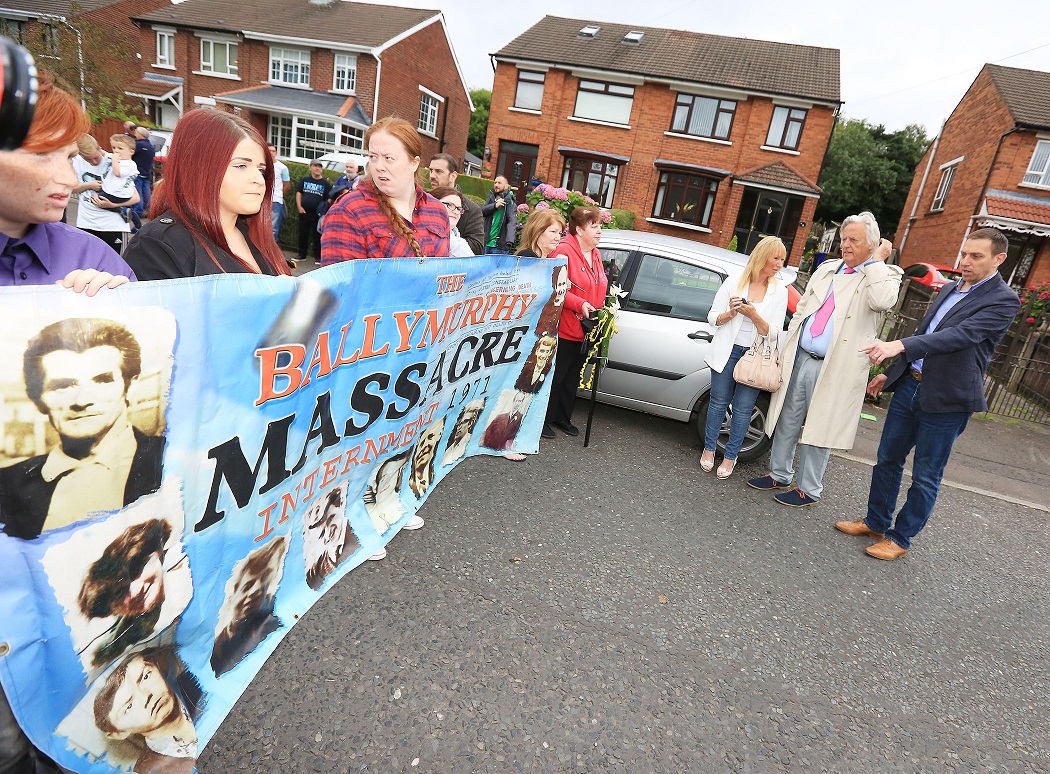 DISTINGUISHED: Michael Mansfield, second right, at the Ballymurphy March for Truth on Sunday

I WAS at the P J McGrory Memorial Lecture in St Mary’s University College on Friday last, given by the distinguished English barrister Michael Mansfield. It was the first time I’d seen in the flesh this man whose legal work has woven in and out through the history of the Troubles. He has represented the Birmingham Six and the Guildford Four; the Price sisters; Brian Keenan; the Bloody Sunday famiies; and in England the Orgreave miners and the Hillsborough families. You can see from the list that Mansfield is a man who chooses to devote his talents to work for those who are victims.

At seventy-five and with a new hip, he’s still an elegant figure in a blue shirt, red tie and that trade-mark swoop of elegant hair. He warmed up his talk with ten minutes of reminiscences about nervously coming to Ireland in the early days of the Troubles and a brief meeting with Gerry Adams. As they stood at the door for a minute afterwards, Adams mentioned that he’d been there the previous day and pointed to a line of bullet-holes above the door. “Don’t hang about,” he advised Mansfield. “I was gone before he was,” Mansfield told us.

He was particularly eloquent talking about the past. At one point he read aloud a fairly lengthy statement about the need to seek the truth of past incidents. In cases like the ninety-six deaths at Hillsborough, truth and justice should be available to relatives, because if left unattended, there is a “toxic seepage” from the past that infects the present and the future. The author of the piece read aloud? Tory Prime Minister Theresa May. If the new PM’s actions match her words, there will be radical change.

Prosecutions
When a man in the audience asked him about prosecutions, he pointed to roadblocks erected by the state. For the state, full disclosure is often “not in the public interest”. He also drew attention to the common denominator between such cases as Bloody Sunday, Orgreave and Hillsborough: “The buck stops with the guys on the ground”. This contrasts with his firm belief that responsibility for such actions extend to ministerial level.

When someone in the audience asked him if he considered Tony Blair a war criminal, he was unambiguous: Yes. Besides the many dead as a result of the invasion of Iraq, there are the huge amounts of money Blair has made in the wake of the Iraq invasion.
In some ways Mansfield’s talk was depressing, because he pointed to the ways in which the state moves ruthlessly to nip in the bud anything that might lead to radical change. And he recalled meetings of the authorities here where arrangements were quickly made that would protect all British soldiers from prosecution for their actions.

And state forces learn from one suppression to another. One example: the police tactics at Orgreave against the miners in the 1980s were replicated in more recent attacks on protesting students, using largely the same methods as those employed against the miners.

He was witty as well as wise, starting his talk by asking if there were any members of Special Branch present, and referring to another similar occasion where a man had actually raised his hand in response to that question. He also reminded any hecklers who might be present that, as a barrister, he’d been trained to a level which left him well capable of responding to any verbal assaults.

Most of the lecture consisted of points many of us knew already; but it was reassuring to hear them come from this hugely-respected figure, as it was to see how he linked cases from here with cases on the Mainland. (Yes, Virginia, he did say “Mainland”. Twice.) Consistently the state showed its determination to deflect responsibility, regardless of the veracity of the charges made. This was the case no matter which party was in office. Tory and Labour governments consistently reacted in the same self-protective way.

The one positive light identified during the talk was the Jeremy Corbyn-led Labour Party. This he believes looks like a new beginning in British politics. Will it be successful? At least in part. It might not achieve all its stated aims but another bold step will have been taken towards genuine reform of British politics.