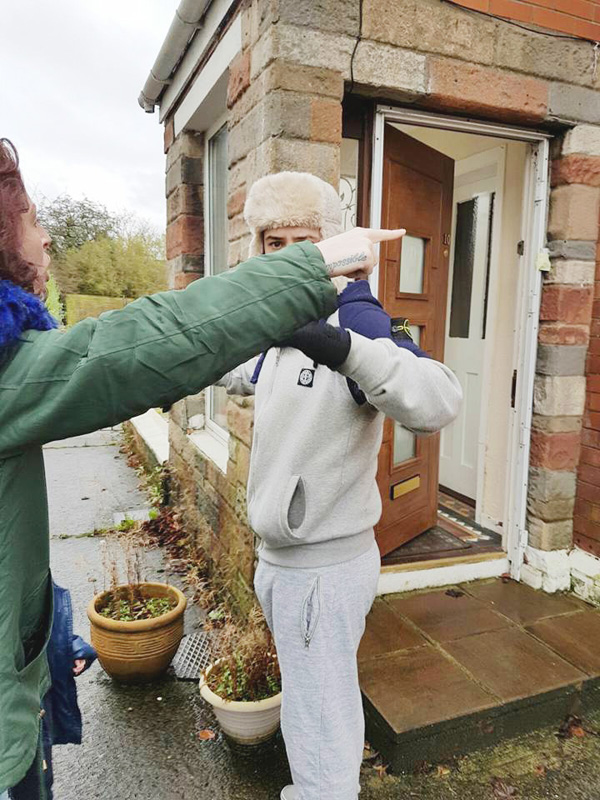 CONFRONTATION: Terie Montgomery confronts one of the burglars she caught in the act at her uncle’s home

AN Ardoyne woman says it was “instinct” that made her confront two men who attempted to burgle her uncle’s North Belfast home.

Terie Montgomery was driving home with her friend on Tuesday afternoon after collecting her daughter from nursery when she noticed two men acting suspiciously at her uncle’s house in Alliance Avenue.

She told the North Belfast News instinct took over and she got out of the car to confront the two men.

“I was picking up my daughter from nursery with my friend,” she said. “I always go home via my uncle’s house and I thought I could see something strange happening.

“I stopped the car and noticed someone standing looking through the windows of the house. I ran over and my friend took her phone out to get pictures of them – it was just an instinctive thing to do to confront them.

“One of them was in the house holding the window open for the other one. I started shouting at them and told them to clear off before I phoned the police. One was Polish and he told me that they thought the house was empty and they were looking somewhere to live.

“I shared some information on social media and the response has been amazing. My family and friends have praised me for my bravery because the men could have had a weapon.

“It was instinctive to stop. It could have been anyone’s house or my own home they were trying to burgle so I knew I had to do something. Thank God we were there at the right time and right place or God knows how this could have ended.”

Terie’s uncle, Paul McVeigh, had left his home around 20 minutes when he got a call to tell him what had happened.

He praised his niece for her swift action and wants to warn local residents to be vigilant following the incident.

“It was around 1.30pm when I left the house to go and visit my mother at her home,” he said.

“I had only been away for about 20 minutes when Terie’s dad phoned to tell me what had happened. Luckily, they didn’t steal anything because they were caught so quickly by my niece. I couldn’t have asked for a better outcome thanks to her.

A PSNI spokesperson said: “Police received reports of an burglary at Alliance Avenue shortly after 2.pm on Tuesday 31 January. Anyone with any information about this incident is asked to contact Tennent Street police station on the non-emergency number 101, quoting reference number 548 31/01/17. Or if someone would prefer to provide information without giving their details, they can contact the independent charity Crimestoppers and speak to them anonymously on 0800 555 111.”

Meanwhile, police are also appealing for witnesses following an aggravated burglary at a house in Orient Gardens in the Cliftonville area on Wednesday night.

Detective Inspector Mark McHaffie said: “It was reported that between the hours of 7pm and 8pm on Wednesday February 1 entry was gained to the premises in Orient Gardens and a number of items were stolen.

“We are appealing for anyone with information who may have witnessed any suspicious activity in the area or have information about the incident to contact Detectives at Musgrave station on the non-emergency number 101, quoting reference number 1151 of 01/02/2017. Or, if someone would prefer to provide information without giving their details they can contact Crimestoppers and speak to them anonymously on 0800 555 111.”