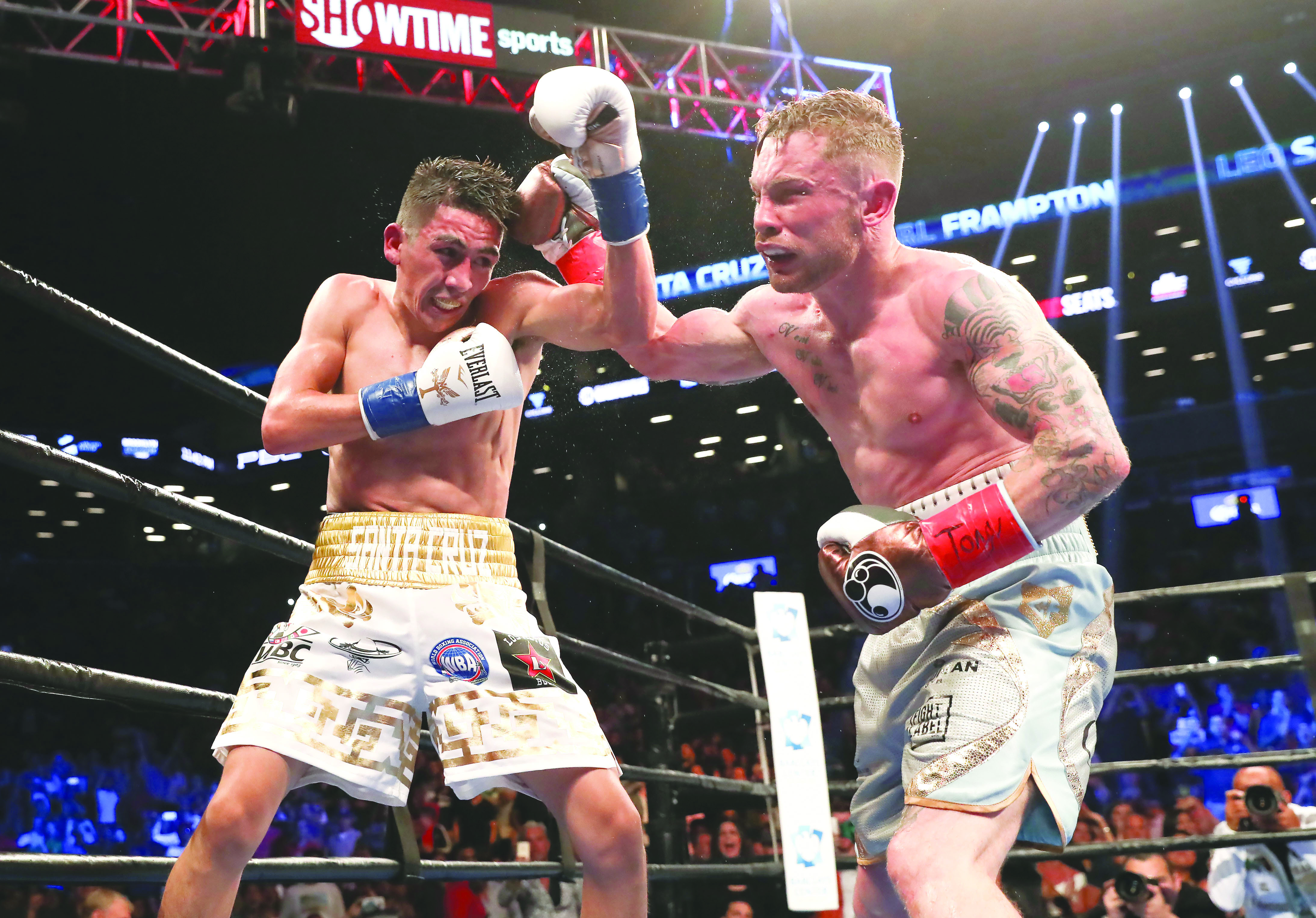 Carl Frampton and Leo Santa Cruz served up a ‘fight of the year’ contender at the Barclays Centre in Brookly back in July. Expect another classic when they renew hostilities at the MGM Grand Garden Arena on Saturday night

WHEN the bell sounds at the MGM Grand Garden Arena on Saturday night (approx 4am Irish time, coverage begins at 1am on Sky Sports 1) to signal the start of round 13 between WBA featherweight champion, Carl Frampton and three-weight champion, Leo Santa Cruz, these stars of the 126lb division will almost certainly pick up where they left off at the Barclays Centre, Brooklyn back in July.

That occasion saw North Belfast’s ‘Jackal’ relieve ‘El Terremoto’ of the title thanks to a majority decision (117-111, 116-112, 114-114) after 12 rounds of breathtaking ‘fight of the year’ action that had the 10,000 in attendance on the edge of their seats throughout. Brace yourself for more of the same. Almost six months to the day later and these nine stone gladiators meet again with the WBA title again up for grabs, this time in the possession of Frampton.

It’s the classic case of ‘repeat or revenge?’ Familiarity can breed contempt, but Frampton and Santa Cruz – like before and after their first meeting – have conducted themselves with consummate grace although the niceties will end once referee, Kenny Bayless calls them to the middle of the ring.

Having the psychological edge of victory the first time can make all the difference with a fighter knowing he has his opponent’s number, knowing where their weaknesses lie and what areas to home in on. For the defeated fighter, it’s about trying to identify these areas.

Frampton says he improves when facing an opponent – whether on fight night or in sparring – and his return against Kiko Martinez when he claimed the IBF super-bantamweight title backs that up after a tough first meeting between the two. He will be aiming for something similar on Saturday against a motivated Santa Cruz who is yet to experience what it’s like to face an opponent for the second time.

Before their July meeting, Frampton said the plan was to land heavily on the Mexican to gain his respect and he did just that, with a left staggering the former champion back onto the ropes and resulted in the California resident’s noted output drop significantly as Frampton banked round after round to put him in pole position going into the second half.

Frampton’s big weapons in New York were his uppercuts, hard counters and his biggest attribute, incredible footwork that saw him dart in and out of range, create angles and land the eye-catching shots.

He needed to be switched on from the opening bell and he was. The same is required on Saturday to ensure Santa Cruz’s noted work-rate does not see the Belfast favourite drown in a tsunami of leather.

The first fight produced some enthraling toe-to-toe action and there will almost certainly be similar at stages this time, but Frampton says he will fight with his head more than his heart to avoid falling into Santa Cruz’s trap.

Frampton revealed he had some problems going into the first fight as he fought through the pain barrier with a hand injury, but his problems paled in comparison to the turmoil experienced by Santa Cruz who had to deal with his father and head trainer, Jose’s diagnosis with cancer that certainly upset his preparations.

However, it was still the same old Santa Cruz in that fight with his eye-watering output at play (he landed 255 of 1002 shots compared to Frampton’s 242 of 668).

To produce these numbers, the Mexican needed to be supremely fit and there is no doubt he will produce similar on Saturday and has even promised to be busier this time around as he looks to even the score and force a ‘rubber match’ between the two. While he has said his tactics will be different, it’s hard to see him veering massively off course although he has suggested he will employ his height and reach advantages to keep Frampton at the end of his long jab and slow his movement by going downstairs.

“I think I have to land more clean punches this time,” he admitted. “I'm going to work the body more and break him down. I'm going to sit on my punches a lot better. I couldn't land my punches clearly and with enough power (in the first fight). “I'm going to fight like this is for my first world title. I'm going up there as a nobody and I'm going to go make a name for myself.

“I'm coming with that kind of hunger. I'm going to show everyone what I've been working on. I want to prove that I'm better than Carl Frampton. If everything works out, we'll get the victory.”

Having tasted defeat for the first time, there is no doubt Santa Cruz will be extremely motivated but can he really change his approach that much and will he revert to type eventually, steaming in and taking Frampton’s shots to get his own off?

The first fight taught us Frampton has the edge in terms of power and with this his second fight at featherweight, he is likely to be stronger again. Do not underestimate the magnitude of this for Frampton.

The Tigers Bay man has come a long way in his career, from boxing for the first time as a seven year-old in a Portstewart hotel to this, the Mecca of boxing where he adorns the billboards as the star attraction. A huge support will make the journey to the MGM Grand for this historic occasion, but Frampton has the temprement to thrive.

Santa Cruz felt the partisan atmosphere benefitted Frampton the first time out, but when all is said and done, it only matters what happens inside the squared circle and who can make the improvements from the first meeting. Santa Cruz’s work-rate and determination is likely to produce some tricky periods for Frampton, but it is ‘The Jackal’ who holds the aces in terms of boxing skills and most importantly, power.

He knows how to beat Leo Santa Cruz whereas ‘El Terremoto’ is confident. Therein lies the difference. It should be Frampton’s night again, maybe even inside the distance this time, but expect another classic as these two outstanding fighters do what they do best.