Revered statue comes to Star of the Sea 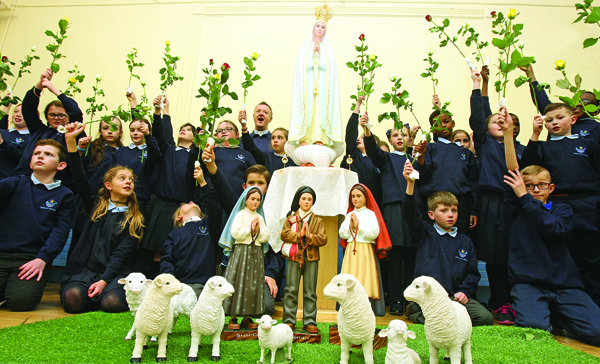 A NORTH Belfast school recently welcomed the Statue of Our Lady of Fatima as part of its pilgrimage of Ireland.
Blessed by Pope Francis, the statue visited St Mary’s Star of the Sea Primary School on the Shore Road on Friday past.
The visit was part of centenary celebrations to mark 100 years since the Virgin Mary appeared to three children in the Portuguese village of Fatima.
The statue arrived in Ireland in March this year and has been visiting parishes across the island in an appeal by Pope Francis for prayer and reparation of peace and to promote the sanctity of family life.
The statue’s visit to St Mary’s Star of the Sea Primary School was organised by Loughshore parishes priest Father David Delargy and members of An Teaghlach Naofa (The Holy Family) prayer network.
Pupils were given the chance to learn the story of the Fatima apparitions and received roses to bring home for prayers for the sick.
Orla Sheehan from the group said: “Fr David Delargy invited the statue of Our Lady of Fatima to schools across the parish to celebrate the centenary celebration of Fatima. The statue of Our Lady came from Fatima. It’s a special statue for us all and bringing it around parishes helps us teach the message of Fatima which is very much to pray for peace in the world.
“The children have really enjoyed and recognised the true story of Fatima. They are fascinated by it and can’t wait to go home and tell their families about the story.
“They were also given a rose and encouraged to pray for the sick and we look forward to bringing the statue to other parishes throughout Ireland.”
Fr Delargy added: “This week, we visited schools in the Loughshore parishes to teach children about the story of Fatima. The message of Fatima is an important message – one of prayer and trying to deliver a good Holy life.”
For info on the statue, visit the ‘Fatima comes to Down and Connor’ Facebook page.