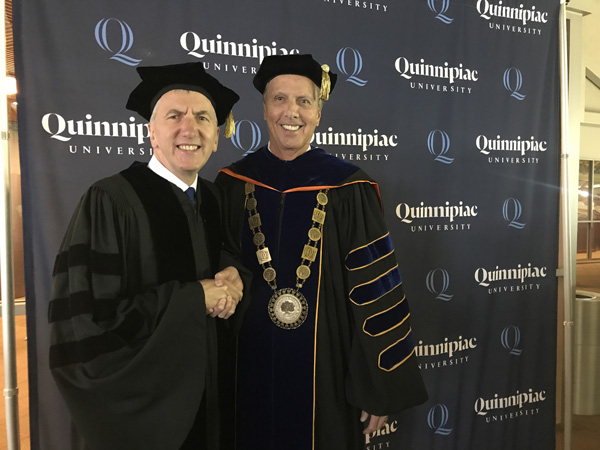 Writing on his blog – NewBelfast.com – Dr Ó Muilleoir said: “I never formally graduated from Queen’s University, my alma mater. Back in the day, graduating students had to endure the British national anthem played by the RUC band, which for me, in 1980, seemed like good reason to graduate in absentia. I was, however, very much present at Quinnipiac University in the hills above New Haven, Connecticut, on Saturday morning for my second graduation.

“I didn’t speak at the graduation ceremony, though if I had have I would have told the young graduates that the most important proverb in the Irish language is, ‘Ar scáth a chéile a mhaireann na daoine’ (‘we all live in each other’s shelter’) and come the day at the end of their long lives when the famed Quinnipiac Polling Institute asks how much shelter they gave to others, I am certain their poll numbers will be sound. And, of course, I would have said ‘go raibh maith agaibh’ to John Lahey, his Vice-President for Public Affairs Lynn Bushnell and to everyone else at Quinnipiac who made the graduation ceremony such a wonderful experience for myself and fellow honorary grads, Conor Kenny of the famed Kenny Bookstore in Galway, who helped gather the museum’s art collection, and Yale economist John Geanakoplos.

“Queen’s University today is an inclusive and progressive institution and I am delighted to work constructively with its leadership team.

“But I have never felt that unbreakable bond with my alma mater that I see among American graduates in relation to their universities. And that may be linked to the fact that, back in the day, those in power at QUB thought it a good idea to make nationalist students stand to salute the Queen. I can’t say for sure.

“Second time around and 37 years on, I was delighted to stand at Quinnipiac University alongside a thousand other proud graduates to receive my degree from John Lahey.”

Sinn Féin northern leader Michelle O’Neill said: “This is testament to Máirtín’s role over many decades of promoting peace and justice in the north of Ireland and his proud record of public service both as an elected representative and as a business leader who built strong and unprecedented links with Irish America.

"Quinnipiac University has forged a reputation for academic excellence and strong social values and is regularly listed among the top 100 universities in the US.

“But its contribution to Irish America, under the leadership of college president John Lahey, is also legendary.

She added: “John Lahey made his first visit to Belfast in 20 years last October when he opened the Belfast International Homecoming.

“Subsequently, Quinnipiac participated in the Friendship Four ice hockey tournament in Belfast and brought a study group of 50 students to Belfast.

“I am confident the conferring of this honorary degree by the university on Máirtín Ó Muilleoir will herald further bonds of education, heritage and sport between Quinnipiac and the north of Ireland.”

Previous recipients of honorary degrees from Quinnipiac include US Senator Richard Blumenthal, Jessica Jackley, co-founder of the microlending website KIVA, and An Taoiseach Enda Kenny.