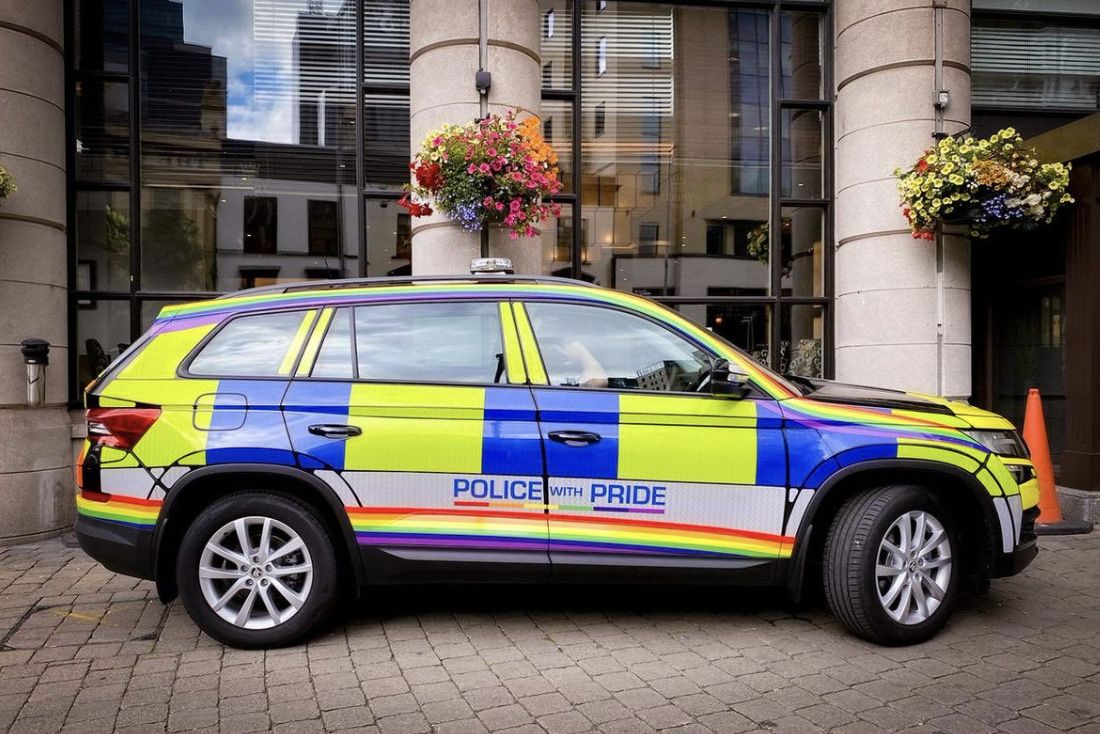 KATE Hoey sent a lovely message on Twitter to those participating in the massive Pride parade in Belfast on Saturday, which came straight from the heart and was deeply appreciated by everyone who read it.

“Hope everyone on the #Pride2022 march in Belfast has a great day,” she tweeted. So far, so good.

“BUT,” she continued (and the capital letters spoke volumes about her  passion), “why is the Chief Constable spending money on police car branding? #politicalcorrect nonsense.” Her tweet was accompanied by a picture of a police 4X4 with a rainbow strip below the driver’s side doors and the words ‘Police with Pride’.

Let’s see now. The display is a removable decal – a strip of plastic upon which the desired words or symbols can be printed and then stuck to the side of the vehicle to be removed or put back on as desired. Design, materials, printing... Squinter’s no expert, but he’s gonna say it cost maybe a hundred quid. Perhaps two. Hell, let’s go completely bonkers and say it was three hundred quid. That won’t pay the overtime of two police officers on the Eleventh or Twelfth of July, which are the biggest and by far the most expensive policing operations the service carries out every year.

£300 might pay for a crew of firefighters to get their safety gear on and slide down the pole when a bonfire goes wrong, but if that’s their entire budget they’re not leaving the station. £300 might be enough for Belfast City Council to clear litter from the City Hall front lawn after a busy summer lunchtime, but the bill’s still not in for the Mid and East Antrim Council clean-up operation in Larne after a 200ft monstrosity collapsed all over Craigyhill. And sadly, £300 is nowhere near enough to replace even one cracked and melted uPVC window frame, never mind an entire house frontage.

Hope everyone on the #Pride2022 March in Belfast have a great day BUT why is @ChiefConPSNI spending money on police car branding ? #politicalcorrectnonsense pic.twitter.com/6hgqMKWqQE

At Pride there were plenty of balloons, an ocean of facepaint, crateloads of glitter and vast quantities of fabulousness. But there were no tyres burned, the Fire Service weren’t required and the threat level was DefCon Minus 500.

Kate isn’t opposed as a matter of principle to messages on the side of vehicles. As an ardent Leaver she no doubt whooped in delight when that famous message appeared on the side of the bus promising untold riches for the NHS in the event of a vote to leave. How much has that cost, Kate? And we’re not just talking about the price of the paint.

West Belfast is moving into Lisburn!

LORD John Kilclooney – the artist formerly known as John Taylor – is to Twitter what a weird uncle is to a family wedding: there’s plenty else to enjoy but you still can’t keep your eyes off him.

Online he’s been in so much hot water Squinter often thinks he should start tweeting from a hot tub, and he’s been at his work again this week, this time in relation to the great city of Lisburn. The Lisburn Fleadh took place there at the week (where else would it take place?) and when footage of Irish dancers in Market Square went up online a charmer by the name of William0973338 (an old Ulster Scots name) replied: “Why is this being allowed in a Unionist city? Take this sectarian shit elsewhere.”

The boul’ John did not demur and he replied to Billy: “West Belfast is moving into Lisburn!”

It falls to Squinter to point out to Armagh man John that Lisburn has already fallen. And some time ago. Squinter doesn’t know how many of the weekend dancers were from West Belfast, but there are nearly more Westies in Lisburn than there are people from Lisburn in Lisburn.


SIR Jamie of Bryson got put back in his bin this week. No surprise there – he’s back in his bin more often than Oscar the Grouch in Sesame Street. But at the heart of the Wee Man’s latest discomfort, which clearly brightened a lot of people’s Monday on Twitter, was a fundamental misunderstanding of the current political zeitgeist in England. Anyway, a quick word first about My Cousin Binny’s latest slapdown...

Jamie was so excited about England’s victory over Germany in the Euros on Sunday that, after a few blue WKDs in the Flag and Flute, he took to Twitter the next morning to make a suggestion: “Congratulations to the Lionesses, who have done the entire United Kingdom proud (GB & NI). Stormont should open a book of congratulations for the team.”

‘England’s Future’ hit back fairly quickly: “It’s England that won, not the UK, GB or NI. The team represents England and has no connection to Ireland. You had your own Irish team who we helped to pack their bags and go home to Ireland. Mind your business Paddy.”

The reason that the response hit a chord with so many is that it’s an English mindset which is immediately identifiable by everyone on this island – north south, Protestant and Catholic, unionist and nationalist, loyalist and republican. The vast majority of the English have precious little understanding of the intricacies of Irish politics and there’s a reason why any referendum on the union will be a six-county and 26-county affair – the English would vote tomorrow to send Jamie and his pals packing, to borrow a phrase from England’s Future.

That’s been the case for a very long time, but the lurch to the right occasioned by the debilitating Brexit process has seen an eruption of English nationalism which views unionists as a pain in the London derrière, thin-lipped loudmouths with their hands permanently extended for the next hand-out. That carnival of Brexit reaction is embodied in a small army of deeply cynical and self-serving charlatans and shysters who are as attached to the idea of the union as Squinter is: Boris Johnson, Nigel Farage, Nadine Dorries, Liz Truss, the list goes on – all of whom care about the union about as much as they do about nuclear physics and all of whom backed the Lionesses with an unconditional enthusiasm they failed to locate when it came to the England men’s team.

Why is it that little Englanders have been ecstatic over the women’s progress through the tournament, when the men’s perhaps more impressive performance against a wider and stronger range of opposition in last year’s Euros was met by boos and jeers and complaints about their ‘woke’ players and manager? After all, the England men were consistently derided by many of their own fans and the media for taking the knee a year ago, whereas the England women who took the knee in this tournament suffered no such backlash, either from their own supporters or the right-wing press.  Well, the victorious England team, the same starting 11 which kicked off every game in the tournament, was all white – mostly blonde and pony-tailed – poster girls for the kind of England pictured in the fever dreams of Daily Mail readers. The men’s team, on the other hand, was a melting pot of ethnicities and colours, many of them uncompromising in expressing themselves, and who found an eloquent and passionate supporter in coach Gareth Southgate when they did. Their defeat in the final on penalties sparked a storm of vile online racism directed inevitably at black players who missed their kicks.

The whiteness and relative silence and passivity of the England women and backroom team, on the other hand, was something with which hard English nationalism could identify.

English roses kneeling before a game was nowhere near as threatening or triggering as strong, athletic young black men taking the knee and not being in the least bit afraid to say why. The new-found enthusiasm for the cross of St George and now the patriotic fervour unleashed by an England victory is nothing for unionism to celebrate. On the contrary, the almost total absence of the union jack from Sunday’s celebration speaks of a country that is no longer bound to the Family of Nations idea.
Maybe that’s worth a book of congratulations.


ANOTHER day, another ‘Disgusted from Dungannon’ story about young people singing about the IRA. Outraged unionists® queued up to articulate their anger/disappointment/ distress at the BBC’s decision to broadcast live a crowd of punters in a County Tyrone pub singing “Ooh, ah, up the Ra.”

No, wait, sorry. They didn’t see it live on TV. Squinter’s got that wrong. They saw it on Facebook. Or Twitter. Or TikTok. Or Insta. Or – probably more likely – they were shown it and invited to comment by a journalist who has them on speed-dial under ‘Internet Fury Quick Quotes’.

The majority of the people singing in that Dromore pub weren’t born when the IRA called it a day. The rest were either being potty-trained or being weaned off the dummy. They weren’t singing to glory in IRA atrocities, they were singing because Irish people have sung about such things for hundreds of years. Do we have to accept that that’s right? No. We simply have to accept that it’s a fact of life and that no amount of hand-wringing on air or in print is going to change that.

If Squinter could press a button and make it stop he would, because as readers of this column will know, he’s not a massive fan of public displays of patriotism; his flag-waving activity is restricted to the occasional show of support for Palestine and he now and then can be prevailed upon to give a lusty rendition of The Foggy Dew. During a daytime walk round Sandy Row in July, outdoor speakers were belting out loyalist paramilitary tunes and on-street drinkers were joining in with gusto. Squinter could have grabbed a 30-second clip, called Councillor Angry Anderson for a quote, written up a 250-word story and banged it on the Andytown News website. But what would have been the point? Nobody in Sandy Row appeared to be offended by it.

Yes, plenty of people online would have been offended if Squinter has uploaded the footage and there’d have been lots of clicks and bants, but it wouldn’t have been journalism. It would have been closer to journalism than what we see day in and day out because at least Squinter was there on the ground and it would have been his own footage – the stories that crop up with depressing regularity are simply harvested from the internet by hacks who don’t leave the office from the first view of the clip to its publication in print and online.

Squinter will once gain appeal to Féile to persuade the Wolfe Tones not to sing the Celtic Symphony (the ‘Ooh, ah, up the Ra’ song) this year because a lot of people within earshot of the Falls Park won’t like it. But also because the usual suspects already have the story written up because they wrote it last year and the year before that and the usual Monday/Tuesday radio phone-in posturing does no-one any favours. But trying to stop something that you can see coming at a major public event is not the same as the media trying post-hoc to police every pub and club and party.

And it doesn’t get any more objectionable if some unionist representative whinges about it after having stood shoulder-to-shoulder with killer soldier Dennis Hutchings or smiled widely underneath a ‘Soldier F’ banner in Derry. 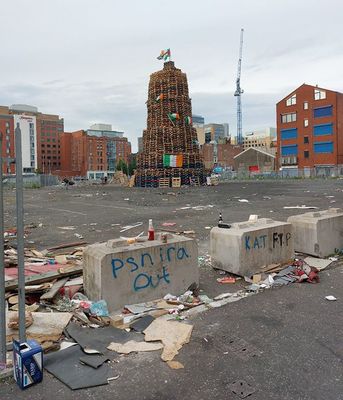 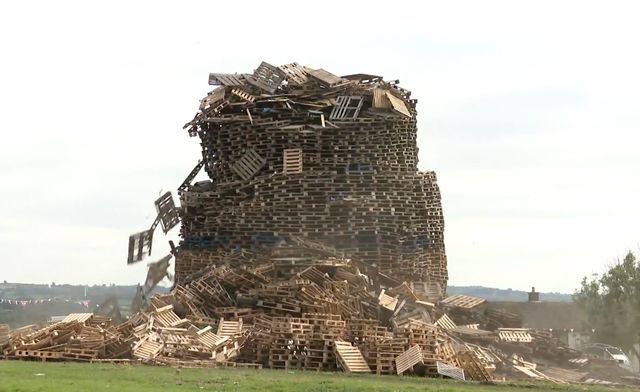