The craic’s ninety but where’s the snow? 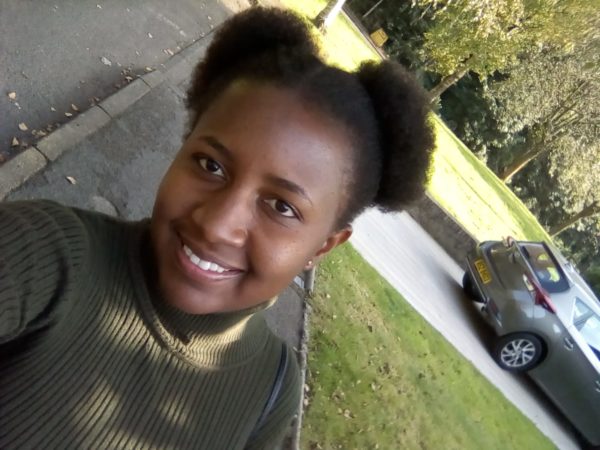 JOURNEY OF DISCOVERY: Penina Kaumbuthu has settled into living in Belfast

“WHEN you travel to a new place, you try to make the best of it and that is what I have done,” says Penina Kaumbuthu with a bookish strong smile.
25-year-old Penina was a bit emotional when she boarded that eight-hour long flight last year.
“I did my research about where to study. I wanted to go for further education abroad and when the opportunity came up, Belfast was the number. I hadn’t been here before. I had never left home. I come from Kenya. I was excited that I was coming to Europe to study Theology at the Bible College in Dunmurry. I had never heard of Belfast before.
“I think it is always good to really put on your in-tray, the places you’ve never been to.
“I have now been to many of the tourism attractions here, my friends took me there. The story of the Titanic was captivating for me. I would love to visit museums around Northern Ireland and historical places.”
The First Year Theology student comes from Meru County which is in the Mount Kenya region. It has a mixture of a green environment and dry grassland. Meru will speak for itself; it has natural beauty. Apart from missing the madness in the Kenyan Matatu transport system, Penina wishes she could smell the food her mum was cooking.
It is hard to tell whether being homesick will be in Penina’s list of worries. She has been told about the Belfast Marathon, that the big names as usual will be the Kenyan runners. So, is she also taking part in the marathon? She has not given it a thought, her main focus for the moment is her studies.
“Of course, I would like to see the beautiful Kenyans emerging at the top because when it comes to sports, they are predictable, Kenyans will steer clear of the back of the queue and win the marathon come May 2020.” Incidentally, she remembers a taxi moment a few months ago when the driver asked if she was as good an athlete to which she took a slight offence, “we win many other things for example a man whose father was half Kenyan and half Irish-American won the US elections!”
Whenever Kenyans mention that President Barack Obama is Kenyan they do it with much delight. It works because the majority of locals here in Belfast will remember Obama as American and forget his Irish and Kenyan roots.
“Belfast is the most welcoming place,” she says. “This is not a cliché. They are genuinely friendly people here. It is almost like it is part of their culture. But they should not be speaking too fast like they do, it has taken me months since my arrival to understand the accent. They could do me that favour.
“I have been waiting for the snow and I think its now long overdue. I can’t wait anymore, when is it coming, when?”
Penina looks embarrassed when talking about snow. Is it a prank or is it for real and there’s only one way of finding out, not sitting at home watching it fall on TV but going outside and touching it.
There is a word and sentence in Irish which continues to ring in her ears and she will never forget: Bring on the craic, what’s the craic? Penina thought she was hearing something about the recreational stimulant that she only sees in the movies. She has since settled to the fact that it is what it is, a slang for, “how are you?”
She feels that she has to learn how to fit in conversations because of the risk of missing something quite important.