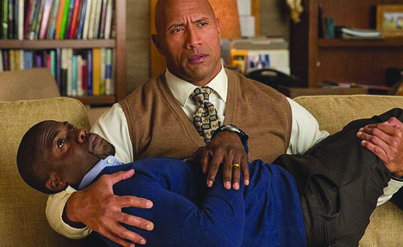 IT’S 1996 and Calvin Joyner (Kevin Hart) is the smartest and most talented pupil in high school. Everybody loves Calvin and he looks set to pursue a prosperous life of wealth and success. Bob Stone (Dwayne Johnson), on the other hand, is not so popular. Obese and a bit of a dork, Bob is severely bullied and Calvin is the only person in high school to show him any sympathy.

Fast forward twenty years and Calvin turns out not to be the uber-successful whizz kid he was in high school, instead settling for a humdrum role in accountancy that’s not really going anywhere. In other words, the last place Calvin wants to be is a high school reunion. Having received an unexpected friend request online from Bob – now known as Robbie – Calvin agrees to meet his old acquaintance and, in the former dork’s place, he finds a man mountain who works out six hours a day.

And what’s even more surprising, Robbie is also a rogue CIA agent who needs Calvin’s accountancy skills to crack a secret code and locate an enemy of the state known as the Black Badger. Yep – this is one high school reunion Calvin is never, ever going to forget.

An odd couple pairing if ever there was one, tiny little Kevin Hart joins forces with The Rock, Dwayne Johnson, who, as you’ll know, is a vast, imposing figure of strength. As duos go, Hart and Johnson are the very definition of little and large. But while we’re used to seeing Hart play the high-pitched screaming, off-the-wall oddball, in Central Intelligence, he plays it relatively straight while the mountainous Dwayne Johnson plays a unicorn-loving dork with a bum bag.

It’s a slight role reversal and it actually works, as Hart’s unhappy accountant Calvin struggles to adjust to life as a super-spy, while Johnson’s geeky CIA agent is quite happy with the whizzing bullets, close quarter combat and fiery explosions. And it’s very much a case of this odd couple pairing carrying the entire movie, because the chemistry between Hart and Johnson is electric.

The plot, which is as simplistic as it gets, fades into the background as the crack-comedy duo take centre stage and, as silly and as daft as the proceedings get, there’s just enough wise-cracking, gun-totting comedy action to keep this movie alive.

Directed by Rawson Marshall Thurber, the guy who gave us Dodgeball and We’re The Millers, the mix of explosive action and slapstick comedy is a winning combination. It delivers just the right amount of punches and punchlines to make Central Intelligence a slightly silly but entertaining affair.

A daft action/comedy with winning performances from an oddly paired duo, Central Intelligence is superbly stupid, but actually turns out to be rather enjoyable too.