The tide flows in and out 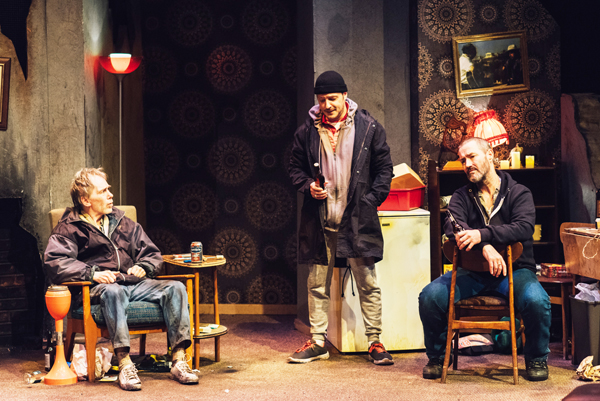 Fuzzy, Shasu and Wishy together

THE PIERCING alarm of an electric meter that needs topping up, carpet stained with dog excrement and overflowing bins set our scene of rancid squalor in the living room of functioning – barely – alcoholic odd couple Fuzzy and Shasu in Pearse Elliott’s As The Tide Ebbs.

Following sell-out runs of The Man In The Moon and The Holy, Holy Bus the bar has been set high for the Lenadoon scribe’s latest work and it didn’t disappoint.

The living room setting could be anywhere where hope was once high but as the years pass, along with them opportunity, life is now resigned to playing Martin Scorsese’s Last Waltz on repeat and drinking yourself into oblivion. Fuzzy, brilliantly played by Billy Clarke, is best friends with Marty Maguire’s Shasu, a comrade from the estate who seems to be able to hold his liqueur that bit better than his incoherent friend. Fuzzy’s house is used as a drinking den and all the misfits gather as and when they please as long as they come with replenishments.

Late one night, a stranger, Wishy (Michael Liebmann) knocks on the door, blue bags clinking, and joins the party at the “House of the Rising Sun, Hotel California where you can check in anytime you like but you can never leave”. As the night progresses it becomes clear that all three men are dealing with, suffering from, different forms of Post Traumatic Stress Disorder from the Troubles. Stories from the past form part of the play’s beginning as drink fuelled bravado turns to tales of true love conquests, love lost or inappropriate relationships with your pet dog. Darkness soon descends on our trio as failed marriages, devastating loss and the repercussions of our actions come out in the early hours when it becomes clear, as Wishy’s body language does a complete 360, that his visit is simply not to keep the party going.

All actors embody their characters with complete believability. The play veers from the comedic to the achingly poignant with just one look from Mary Maguire or Billy Clarke’s Fuzzy saying “yes I live alone, but I’m not lonely” as he scavenges for the last bit of blow that has fallen under the sofa or hides the last bottle of drink in the bin for later.

Niall Rea’s set design is another stand out of this production. From the tattered wallpaper, busted furniture where the only appliances working are two well stocked fridges and a DVD player, the edges of the set are surrounded by sand; a subtle nod to the title in that no matter when the ‘tide ebbs’ the debris of human life and what has gone before gets left behind only to one day be revealed.

As The Tide Ebbs runs at the Lyric Theatre until Sunday June 5. For ticket details visit www.lyrictheatre.co.uk or telephone 02890 381081.