The time is right for Burnett to shine: Booth 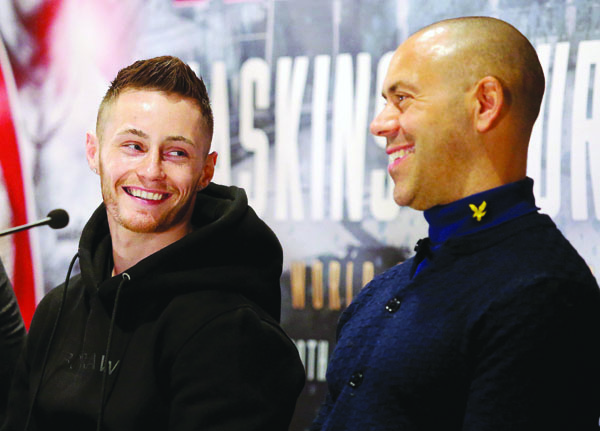 Ryan Burnett shares a joke with his trainer, Adam Booth

ADAM Booth believes the steps Ryan Burnett has taken to Saturday’s world title fight will serve him well and help him claim the IBF bantamweight title.

The Londoner has been training Burnett since 2014 and has watched him blossom as a boxer and a person. He feels that his man is getting his title shot at exactly the right time and is ready to deliver a career-best performance.

“He has worked enough in the gym, he understands enough now and he has a challenge in front of him where he can prove his point,” said Booth.

“Stay focussed on what he has to do and deal with every moment of every round because if he does it right, I don’t see anything other than him winning.”

Booth is renowned for his calm demeanor and is a firm believer in a boxer keeping his cool in the ring.

Burnett was 22 when they first linked-up and he feels his man now has the maturity to handle occasions such as Saturday’s.

“He has a lot of fire in his belly,” he explained.

“The one thing I say to him is to think of the analogy of fire. It can cook your food, warm your house and keep you alive, but if you don’t control it, it can burn your house down and kill you.

“He has this rage inside him that at any given moment can burn him. So every day it’s about understanding how to behave when you feel a certain way, especially in a fight.

“You are getting stung with shots and you can’t quite get that success and the crowd starts roaring, you don’t lose your head as you can run into a shot.

“There might be other times when the right thing to do is to lose your head because the other fella can’t cope with that heat.

“If I was to feel a fight was slipping away in round eight or nine, I know I can say to can to put it on him and he has it in him to do that.”

Booth has carefully selected opponents for Burnett who will give him different looks and make him adapt, so-much-so that he goes into Saturday’s title fight knowing how to adapt in any given situation.

“It is all about taking the right fights at the right time and my job is to know what my fighter is capable of, know what things he still has to improve on and when he has an opponent with that skill-set, can he deal with those,” he continued.

“What are the best things Lee Haskins can do? Forget age and all that, can you deal with what he’s good at? If you can deal with that, then we win the fight.”

Having been used to fighting away from home and virtually unheralded outside of the boxing fanatics, a world title fight in his home city will bring its own pressures for Burnett. But his coach, who has been involved in some huge fights as a trainer including David Haye v Wladimir Klitschko and George Groves v James DeGale, has urged his man to soak it all in and says the other, experienced boxers in his gym have helped Burnett get ready.

“If you want to be a champion in your home city, you have to deal with it,” Booth stressed.

“I’ve been involved in some big hyped fights so it’s nothing new to me. Andy Lee is in the gym and Billy Joe Saunders, so there are people around him who can help him. At the end of the day, all that matters is what he does when the bell rings, so just go and enjoy it.”