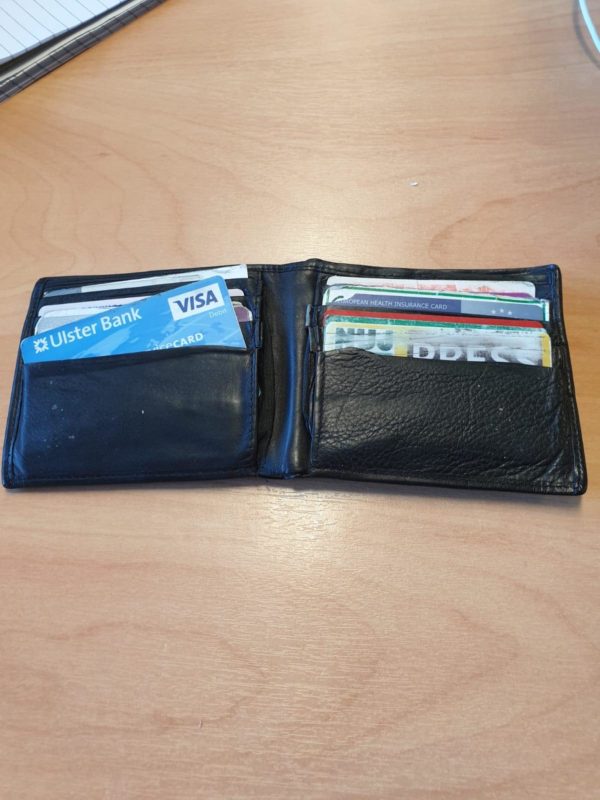 CARD GAME: The missing plastic has been restored to its rightful place, but not before a bit of messing about

SUPPOSE it had to happen some time given Squinter’s, ah, interesting history of comical misdemeanours.
Sunday afternoon and Squinter’s heading up the lough with the dog for a walk, but as he exits the street the orange petrol symbol on the dashboard lights up and he notices that the needle is lower than a Rangers fan in January.
A few minutes later and he’s on the Sainsbury’s forecourt pumping gas, man, while the dog looks quizically up at him through the passenger window. Inside, he says “Pump five,” to the girl behind the glass as he extracts his wallet from what his da used to call his arse pocket. The damage is £43 and Squinter’s not particularly alarmed to find that the familiar blue of his bank card isn’t in its usual prominent position, for there’s all sorts of cards in there, including some that Squinter hasn’t even looked at for some considerable time. And occasionally the bank card will disappear behind a two-year-old gift card with 90p left on it, or a department store account card that he took out three years ago to get 15 per cent off a pair of shoes.
So Squinter wasn’t particularly concerned as he moved the cards about, fully expecting to see the bank logo peek out. But as the seconds ticked by, he started to get a teensy bit concerned. He apologised to the smiling shop assistant and launched a second search, this time a methodical slot-by-slot trawl which revealed the worst: Squinter’s wallet was a bank card-free zone. A juke into the bankote section revealed a sad and solitary fiver, while his pockets were heavy with the substantial burden of two pound coins, a 20p and some coppers.
And then an image flashed into Squinter’s mind of him handing his card to his son along with the car keys the previous night so he could make yet another withdrawal from the Royal Bank of Squinter. No such image flashed of the card being handed back. The upside of this development was that Squinter wouldn’t have to go through the trouble of cancelling the card, but right now he was faced with the awkward task of telling the smiling girl behind the glass that he couldn’t pay for his petrol.
Squinter didn’t exactly expect a security guard to emerge and escort him into a back room to wait for the Trevors to arrive, but he was still pleasantly surprised to find that a scene didn’t develop. Instead, the assistant kept smiling and informed Squinter that he’d just need to put some details on a form. And out came said form, most of which she completed, requiring Squinter to put down his name, address and phone number. After a check of Squinter’s driving licence, she handed over a duplicate copy and informed him that he had seven days in which to pay.
And after a cheery round of mutual thanks, off went Squinter clutching his wallet and receipt. The entire episode had taken perhaps three or four minutes.
When Squinter told a colleague this story he revealed that he had done precisely the same thing once, except at an independent petrol station. When he explained his dilemma (and the petrol station’s dilemma, when you think about it) the woman behind the counter asked to see his mobile phone and when she looked at it she decided it would do and asked him to leave it with her. Which he did – and he was back with his bank card in ten minutes.
In Sainsbury’s Squinter had assumed some similar hostage arrangement would take place – that he’d have to leave maybe not his phone, his driving licence or his press card. But not a bit of it. A form alone it was. And Squinter’s so impressed with the service he might even pay the money/