Trailblazers inspired by the landscape around them 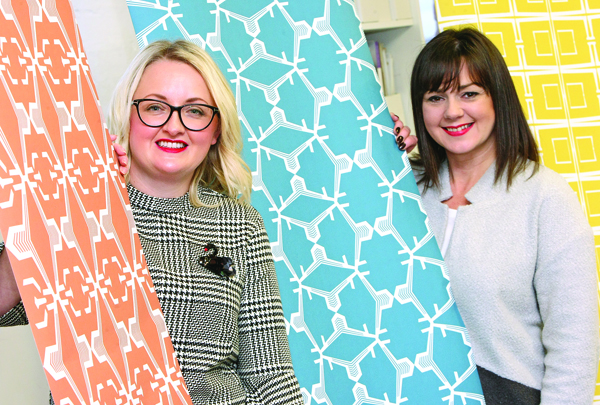 Martina Shields and Nicola McArea of MANI Interior Design with their wallpaper based on the Harland & Wolff cranes; left, at their Conway Mill studios

TWO trailblazers from the interior design industry are teaming up with the Springfield Charitable Association (SCA) to design a “world class” space as part of its redevelopment of the former blood bank at Cupar Street.
Based in Conway Mill, MANI Interior Design’s Nicola McArea and Martina Shields explained that their creative flair very much “comes as a package” after the two met at Ulster University’s Art College while studying as mature students. Having previously worked for other businesses the pair decided to come together and “do it for ourselves,” explained Nicola.
With the Harland & Wolff cranes as a backdrop to their work space within the Mill, Nicola and Martina explained how their everyday view inspired their latest work of bespoke artwork from wallpapers to cushions.
“The other extension of MANI design is our Two Birds off-shoot which brings together industrial landscape, graphics and we have designed wallpaper to incorporate that,” said Martina.
Nicola told the Andersonstown News that the duo wanted to design “something that would travel”.
“We didn’t want to take a picture of the cranes and put it on wall paper, it needed to be quite graphic and eye-catching.”
The success of the product is already creating a buzz across the city with Titanic Hotel selecting a wallpaper design along with the Big Lottery offices and the Bullitt Hotel establishing a concession of products in their reception.
After transforming the interior of Kennedy Way based Baillies Coffee Roasters Nicola said that she and Martina will be meeting with SCA’s Terry McNeill this month to further discuss the interior work of the Cupar Street space.
“We want to design something really special. It’s a great project because it’s local and Terry has been great to work with and exchange ideas with.
“There have been ideas brought up of creating, designing a meeting place for older people and we want to do something special. We want to design a centre other designers and charities will look to and show how this is what could be done,” she said.