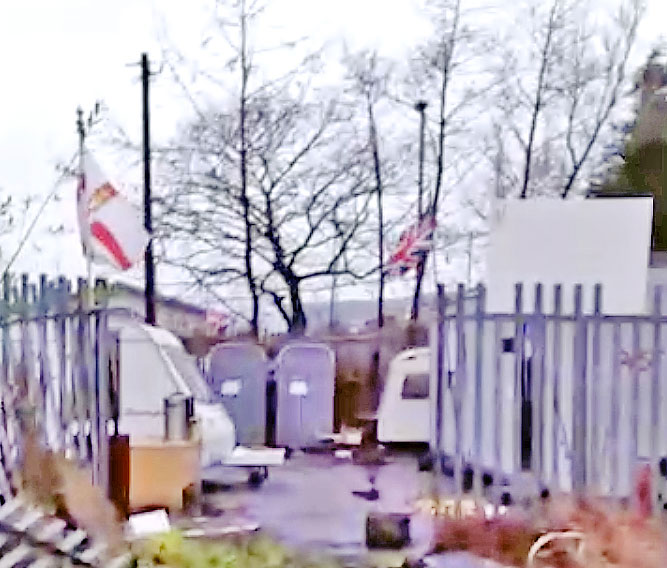 SNATCHED footage giving a remarkable glimpse inside the protest camp at Twaddell Avenue and handed to the Andersonstown News has provided more evidence that no-one actually lives on the site, despite loyalist claims that it’s occupied at all times.
Just days ago a West Belfast man gained access to the camp through a gap in the fence at the rear of the Housing Executive-owned site – thought to have been created when loyalists ripped down a section of the fence to allow easy access to the Woodvale district to the rear of the camp (see still, right).
The PSNI say the camp costs £40,000 a day to police. On Monday in the High Court the Housing Executive will begin a legal bid to have the protestors removed from its land.
North Belfast Sinn Féin MLA Gerry Kelly said: “It’s time the camp went.” He added: “The claim from Camp Twaddell that there is a presence on a permanent basis, 24/7, at the site is a myth, clearly there isn’t. I have passed by when there hasn’t been a sinner there.
“The cost of this, as people know, is an absolute fortune when police resources are needed elsewhere. I have said many times before and it is still worth saying that to resolve this we need to engage in dialogue.”