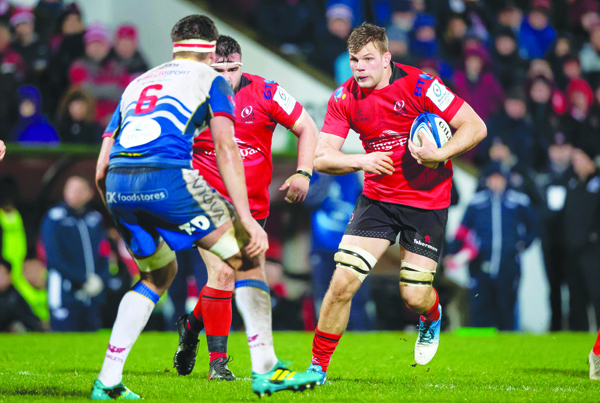 Jordi Murphy won the Champions Cup with Leinster last year, but hopes to overcome his former team with Ulster on Saturday

IT would be fair to say that Dublin hasn’t been the happiest of hunting grounds for Ulster Rugby in recent years, but they will be aiming to summon the spirit of their last European trip to the Aviva Stadium on Saturday when they travel to take on Leinster in their Champions Cup quarter-final.

The 2012 semi-final at the Dublin 4 venue saw Ulster overcome Glasgow before running into a Leinster juggernaut in the final at Twickenham, while PRO12 (now PRO14) knockout meetings against the boys in blue in subsequent years including the 2013 final also ended in disappointment.

Indeed, Leinster have won the past four meetings between the provinces, with Ulster’s last victory coming in a pretty inconsequential meeting in May 2017, so it is up to the northern province to find the answers this time around and end the hosts’ ambitions of claiming back-to-back European titles.

It will be no easy task of course, with Leinster in flying form again this season. While they may have lost out to Edinburgh last week, that was with a side that is likely to bear no resemblance to the one that will take the field on Saturday evening given they are runaway leaders in Conference B and are assured of a home semi-final.

That means they have been fully focused on the retention of the Champions Cup of late, but one player who was part of their 15-12 win over Racing 92 in last year’s final is now plotting their downfall.

Jordi Murphy is one of several ex-Leinster players including John Cooney, Marty Moore, Nick Timoney and Alan O’Connor who now play in the white jersey and the Ireland flanker says he is looking forward to taking on his former club having missed out on the 40-7 PRO14 defeat earlier in the season.

“I’m really looking forward to getting stuck in,” he said.

“I wasn’t able to play in December, but I’m dying to get a game now. It was one of the things I was definitely looking forward to when I decided I was going to be moving up here.

“It’s just great that it’s on such a big stage and back in the Aviva, where I have some pretty fond memories – and I’m hoping to make a few more.”

Ulster have a number of injury problems ahead of Saturday’s quarter-final with Iain Henderson just winning his fitness battle he sprained a knee in Ireland’s Six Nations win against France.

However, it is at centre where there were major issues for coach, Dan McFarland a headache, but Darren Cave has recovered to start at 13, while Luke Marshall is included in the replacements having returned to the squad after a cruciate injury sustained last May.

Leinster have their own issues with Josh van der Flier and Devin Toner missing out, while Johnny Sexton's absence means that Ross Byrne starts at 10.

“Leinster have quality across the park,” Murphy acknowledges.

“They are European champions for a reason and they won a double last year, which is historic enough, even for them.

“I think it’s hard to put a finger on anything as they have quality all the way through the forward pack, with boys like Tadgh Furlong and James Ryan who are coming back in now after playing well for Ireland.

“Then, with some of the threats they have in the backs, like young Jordan Larmour and James Lowe mixed in with a lot of experience, it’s going to be a huge challenge.”

It certainly will be, but Ulster have quality themselves with Jacob Stockdale the joint-top try-scorer in Europe this season with six alongside Leinster’s Sean Cronin.

His threat is one that Leinster back, Jordan Larmour has said they have identified, but the 21 year-old has noted that Ulster are far from a one-man team and they are expecting a tough challenge.

“Ulster are playing really good rugby at the moment, especially when they have front-foot ball, they just keep playing at a fast tempo,” said Larmour.

“We are going to have to be on our game and have a good game-plan this week; keep building on it and get to a sold-out Aviva and let loose.”

Ulster fans are expected to travel south in force on Saturday, but they will still be greatly out-numbered.

However, that wasn’t an issue when they went to Thomond Park and shocked Munster in a 2012 quarter-final and they will hope that can prove to be an omen ahead of the game.

“We’re going to have a great travelling support as well – I’ve heard it’s close to 15,000, so you can’t really ask for any more,” added Murphy.

“The home support here is incredible and they’ve travelled with us well this year, especially in places like Scarlets and Leicester. I’m looking forward to seeing them in the Aviva this week, they’re a loud bunch and I’m sure they’ll make themselves heard.”