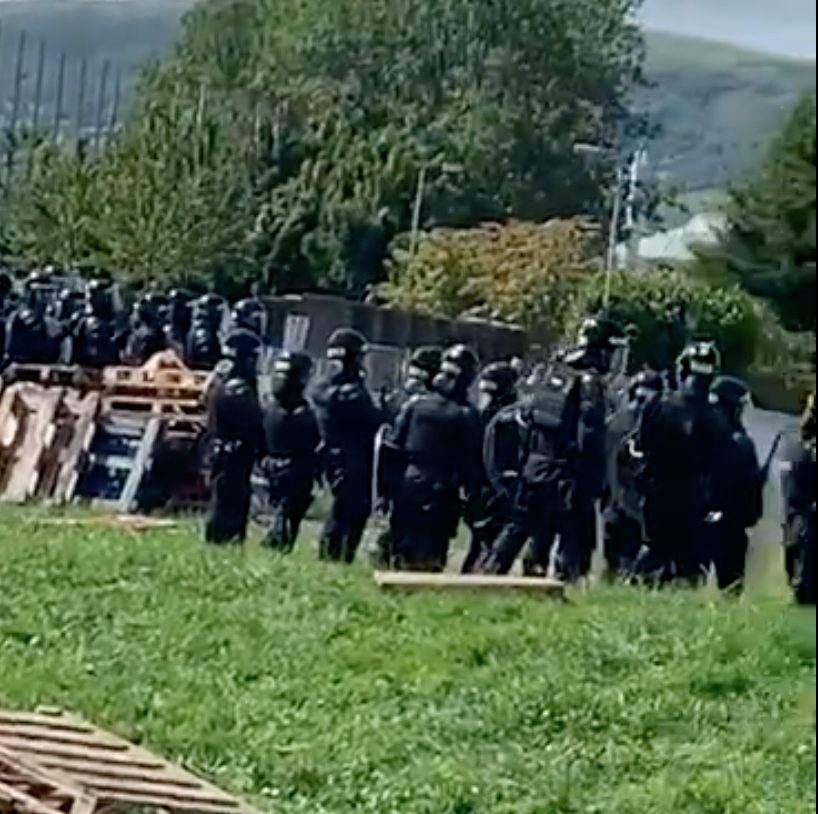 There were no reports of disturbances or bonfires across nationalist areas of Belfast last night, the 49th anniversary of the introduction of internment.

Over recent days, contractors had moved into Divis and Distillery Street to remove bonfire material put in place by young people.

A bonfire, branded "the hoods' bonfire" by local people had traditionally been located on ground off Divis Street which is now home to Irish radio station Raidió Fáilte. Local political and community leaders had called for an end to the lighting of bonfires in the area which, they said, were magnets for anti-social elements.

Last year, a mammoth bonfire in the New Lodge sparked confrontation with the PSNI and community demonstrations in solidarity with local people.

The PSNI say 26 officers were injured in an operation to support contractors who moved into the Distillery Street area yesterday to remove bonfire materials stored beside the Westlink. The officers were attacked (see below) as they withdrew from the area.

"This year the New Lodge was peaceful because residents and youth workers engaged tirelessly to make sure there was no repeat of the disgraceful scenes that were visited on this community last year," he said. "Full credit to them. In previous years, the community has been let down by statutory agencies not stepping up but this year there was a real team effort which made all the difference. The key thing now is to ensure we build on this work in the time ahead."

A PSNI spokesperson called on parents to do more to ensure children were not caught up in attacks on police. "People who choose to engage in criminal and anti-social behaviour must understand it is unacceptable and must stop. Parents and guardians have an important obligation to keep young people safe by knowing where they are going and who they are with."

The IRSP had accused police of antagonising young people by their action in removing bonfire material but Sinn Féin's Gerry Kelly in a Tweet today congratulated all involved in preventing a repeat of last year's trouble. "Well done also to Belfast City Council, Communities and Infrastructure departments and police," he said.

Justice Minister Naomi Long condemned yesterday's violence. “The multiagency approach adopted in response to public concerns over bonfires, including community engagement with residents and elected representatives, allowed the vast majority of contentious bonfires to be removed or significantly reduced in scale without incident," she said. "Clearly and regrettably, however, there are still some determined to orchestrate violence in order to draw the police into conflict."

Many thanks to the residents and youth workers in North Belfast for their work in preventing unwanted and dangerous bonfires particularly in the aftermath of the violence last year.Well done also to Belfast City Council, Communities and Infrastructure Depts and Police.