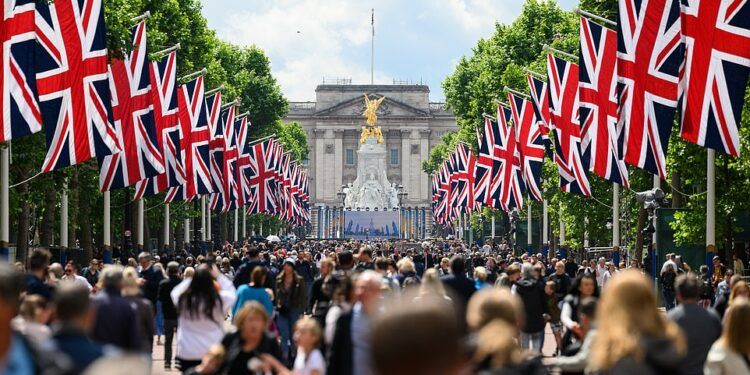 JUBILEE: Four days of fawning media coverage may have given us a rather slanted perspective

THE media over the past week have jumped into the Royal Platinum Jubilee anniversary pool and splashed about wildly.

Were Harry and Meghan snubbed? Is Prince William going bald? (Less laughing at the back, please.) Wasn’t Her Majesty wonderful to make it to the balcony to watch the Red Arrows fly past, billowing red, white and blue vapour trails as they went? Never mind that they get those colours by mixing red and blue dye into dirty diesel fuel and do bad things to the environment. The RAF has vowed to go net zero in 19 years, so there.

But the British people, or certainly the English people, just can’t get enough of their little queen. When the media confronted ordinary people with a microphone, they said they loved QE2 because she’s done 70 years on the throne and because she works so hard.

CertainIy being 96 is preferable to the alternative, but have we maybe got a cock-eyed view of age for HM and everyone else?  We send people our “Birthday congratulations” – ridiculous or what? You get to be the age you get to be, through good luck rather than any personal effort on your part.  So the idea that we should be congratulated on a matter beyond our control  is crazy.

Mind you, there is one thing you can do: be born rich. Rich people in England live ten years longer than poor people. So QE2 appears to have chosen wisely in the birth stakes. A lifetime living in the lap of luxury, besides being enjoyable, does great things for your chances of growing old.

The other thing that people vox-popped in the huge crowd said was that they liked their monarch because for 70 years she has been so hard-working. No doubt about it, compared to others in the royal family, she does put in the hours. In 2018, she completed 293 ‘engagements’, the average for the other royals is 84.5 days. On the average day QE2 gets out of her scratcher at 8.30am, has a bath, reads the papers, and signs some documents the government sends her. Not exactly back-breaking. She also gets out there and does some handshaking, hand waving, smiling, and even delivers the odd speech written by someone else. But remember,  she does get 72 days off each year.

As well as being Queen of England, Elizabeth II is the Head of the Church of England. I’d say she gets on well with the Archbishop of Canterbury, but why wouldn’t she? She doesn’t openly engage in extra-marital activity  or consort with convicted paedophiles, which are definite pluses for any Church Head.

But there’s a paradox here. QE2 is 96; whoever succeeds her will not have the same clean slate. In fact, the more she is hailed by the media and ‘ordinary people’ throughout England, the harder it’ll be for her successor to match her performance.

“But HM living in Buckingham Palace is great for tourism,” we’re told. Certainly you do get a lot of people having their photo taken outside Buckingham Palace. But the thought of her being in there  – is that what draws the tourists?

Well, compare Buck House with the Palace of Versailles. That’s where Louis XIV used to live. Louis’s been dead for over 300 years now, yet the Palace at Versailles gets around 10 million visitors each year. Besides, did you know Belgium has a royal family? And Denmark? And Holland and Norway and Sweden? It’s just that the people of those countries  don’t pour millions of public money into the royal laps and  they don’t present their royals as a living soap opera for the masses.

Still, the English have a right to choose their own head of state. They can even shower her/him with money if they want. But would it be possible to send my share to the Vincent de Paul?