A Great Arrangement makes a great night out 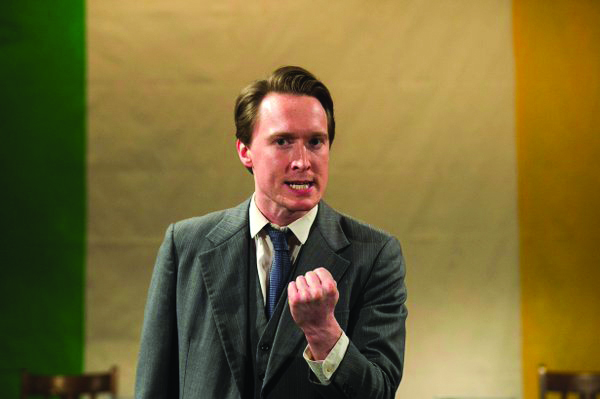 Michael Collins’ romance with Longford woman Kitty Kiernan is one of the lesser explored parts of his life – probably because the information was only really revealed when private letters between the two were released 16 years ago.

The correspondence allowed historians to gain an insight into the private life of Michael Collins. Now a play based on the long distance romance carried out via post will run tonight and tomorrow night in The Mac. A Great Arrangement uses the letters to present this lesser known side of the Cork man.

On stage, two desks face the audience with Collins on the left and Kiernan on the right, dominated by a huge Union Jack which in the second act is replaced with a tricolour.

Fiery oratory from ‘The Big Fellow’ brings the audience through the politics of the signing of the Treaty and the ensuing civil war at a rollicking pace but these events are always in the background. Dominic MacHale’s Collins undergoes a transformation every time the dialogue shifts to letters he sends to Irene Kelleher’s Kitty. The ruthless guerrilla leader quickly becomes an affectionate, almost love struck young man in his light-hearted missives, with a clearly besotted Kiernan wishing only for a normal life with the man who is moving from solider to statesman and celebrity.

The play opens with correspondence to Kiernan from Michael Collins’ best friend Harry Boland, who is keen on a relationship with Kiernan. But the stale formality of his writings when set beside the later playful correspondence of Collins’ brilliantly show that there’s only one man for Kitty. Indeed her response to Boland is unknown, as it doesn’t appear in the production.

Although the letters form the most interesting part of the play, the history is well covered thanks to a strong cast who play a number of characters.

As usual, DeValera is played as the dour ideologue, willing to pursue war rather than accept the terms on offer. The sympathetic portrayal of the man who would dominate Irish politics for a generation has yet to be written.

The play even finds time to include the Pope and King George who are concerned that the agreement will not be signed.

The final act is poignant with a downcast Collins – now in his general’s uniform – writing to Kiernan as he prosecutes a war against his former comrades. Kitty’s dreams of running away and making a life with her betrothed are becoming less likely but she dares to dream in her letters anyway.

What the play doesn’t tell you is that Collins’ last letters to his fiancée were sent to a house in Bangor, County Down.

Kieran’s sister had married a doctor in the town and Kitty was staying with her when Collins was killed at Béal na Bláth. His last ever written letter arriving after he had died.

A Great Arrangement is performed tonight (Friday) and tomorrow night at 7.45pm and more details can be found by visiting https: