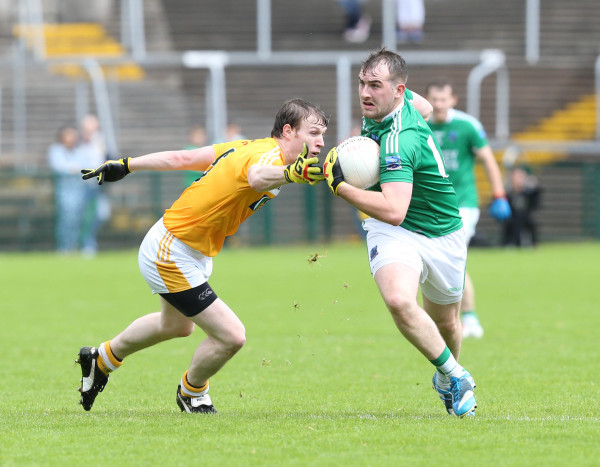 All-Ireland Senior Football Qualifiers Round 2A

Antrim’s 2015 Championship campaign ended with a thumping 13-point defeat at the hands of a Sean Quigley-inspired Fermanagh side at Brewster Park yesterday.

The Roslea attacker hit 0-14 in a stunning individual display of finishing to put Antrim to the sword. It was the second time in five weeks that the Ernemen have tasted victory over the Saffrons.

In their Ulster SFC clash at the end of May, eight points separated the sides, with a Quigley penalty late in the game adding gloss to the final score.

Yesterday, the margin of victory was fully merited. Antrim were totally outclassed and comprehensively outplayed. Few Antrim players did themselves justice on the day, while Fermanagh delivered one of their best Championship performances in many years.

Pete McGrath’s side, who were this morning drawn to play Roscommon in the next round of the Qualifiers, will be buoyed by how they responded from their Ulster SFC semi-final defeat to Monaghan.

For Antrim, a long summer of soul-searching will begin. Manager Frank Fitzsimons was at a loss to explain his side’s listless showing after yesterday’s game. Just 13 days earlier, he had watched Antrim complete a remarkable comeback victory against Laois. Trailing by seven points against the O’Moore County at half-time, the Saffrons caused one of the biggest shocks of the Championship so far by knocking out Laois 2-15 to 1-16.

At half-time in Brewster Park, Antrim were behind 0-11 to 0-5. Although the gap wasn’t as big, Antrim never looked like getting themselves back into contention. Fermanagh were quickest off the mark with scores from Quigley and Tomás Corrigan before a brace of points from Mickey Pollock leveled the game after a lively opening five minutes.

Antrim took the lead for the first time when Owen Gallagher kicked a fine point from play on eight minutes. It was to be the one and only time Antrim had their noses in front.

A Quigley free levelled the game once more before Fermanagh assumed control of the game with a run of seven unanswered points.

With Quigley alternating positions with centre half-forward Ryan Jones, Fermanagh were able to create and exploit gaps in the Antrim defence. Barry Mulrone, Paul McCusker, Quigley and Niall Cassidy all kicked points during a 20-minute spell of Fermanagh dominance.

A casually-stroked 45 from Quigley sailed over Chris Kerr’s crossbar to put Fermanagh six ahead.

Fitzsimons had seen enough. Antrim’s 2014 captain, Niall McKeever, was sent in to stop the rot and the towering Portglenone midfielder announced his arrival with a booming point on 31 minutes.

At the other end, Kerr was called into action to make a smart save to deny Paul McCusker from scoring a Fermanagh goal.

However, Antrim’s momentum was checked by two Quigley points from placed efforts – the second of which came deep into added time.

Fitzsimons brought in further reinforcements at half-time when CJ McGourty replaced Dermot McAleese and Antrim started the second half with more vigour.

However, it was Fermanagh who opened the scoring on the restart with Quigley again making his presence felt with two well-taken points. Mark Sweeney and Pollock replied for Antrim, but the visitors couldn’t get a run of points together to disrupt Fermanagh’s confidence.

Antrim’s refusal to deploy a sweeper meant that Quigley was able to torment Ricky Johnston and Justin Crozier and one passage of play in the second half highlighted their plight. A searching delivery into Fermanagh’s full-forward line was destined for Quigley. Although tangling with Johnston in a race for possession, the Roslea ace took a one-handed catch, turned, brushed aside the challenge of Johnston and rifled the ball over the bar.

It was a heartbreaking score for Antrim and one which put the home side eight clear with just under 20 minutes remaining.

Just minutes prior to Quigley’s haymaker, McGourty had split the posts with an outlandish score of his own. Off balance and under pressure from his marker, the St Gall’s attacker somehow managed to find the target. Yet moments of quality finishing were few and far between for Antrim yesterday.

With their Championship campaign hanging in the balance, Antrim desperately needed a goal to get themselves back into contention.

As fate would have it, Fermanagh struck with a goal with 15 minutes remaining to put the game firmly beyond the reach of the Saffrons.

Wing-back Marty O’Brien played a delightful one-two with Paul McCusker and bore down on Kerr’s goal. Niall Delargy, who was on a yellow card, timed his tackle to perfection to strip O’Brien of possession.

Antrim’s misfortune dictated that the ball fell to the feet of the raiding Erne defender. O’Brien didn’t hesitate and his shot flew past Kerr and into the roof of the net. With 10 points between the sides, there would be no way back for Antrim.

McGourty scored his third point of the day immediately after O’Brien’s goal, but a 45 from his clubmate Kerr on the hour mark was Antrim’s only score of the final quarter. The final minutes of the game were painful to watch as Antrim tried in vain to engineer a goal chance. Fermanagh were able to absorb the pressure and then break with pace. More often than not, Fermanagh’s counter attacks led to points. More often then not, the attack ended with a point for Quigley.

With 0-14 in the bag, McGrath called his prized asset ashore and the home crowd gave Quigley a rapturous reception.

The agony wasn’t over for Antrim, though.

Fermanagh spurned a glorious goal chance minutes after Quigley’s withdrawal when Mulrone blasted wide when he had two teammates free inside. Substitute Sean McManus landed Fermanagh’s final point in injury-time to leave 13 points between the sides at the full-time whistle.

A sterner test awaits the Ernemen this weekend when they host Roscommon. For Antrim, they must review another season where expectations were not met. Many will feel that the absence of so many seasoned players from last year’s panel, coupled with the departure of three talented youngsters for Boston, hampered Antrim’s ability to get a good run in the Qualifiers.

Question marks also now hang over the inter-county futures of some of Antrim’s elder statesmen. Mickey Pollock has already indicated that he won’t be part of Antrim’s 2016 plans. Kevin McGourty and Tony Scullion will also ponder their futures.

For manager Frank Fitzsimons, though, the planning for next season will begin with the search for new talent when the club Championships gets under way next month.