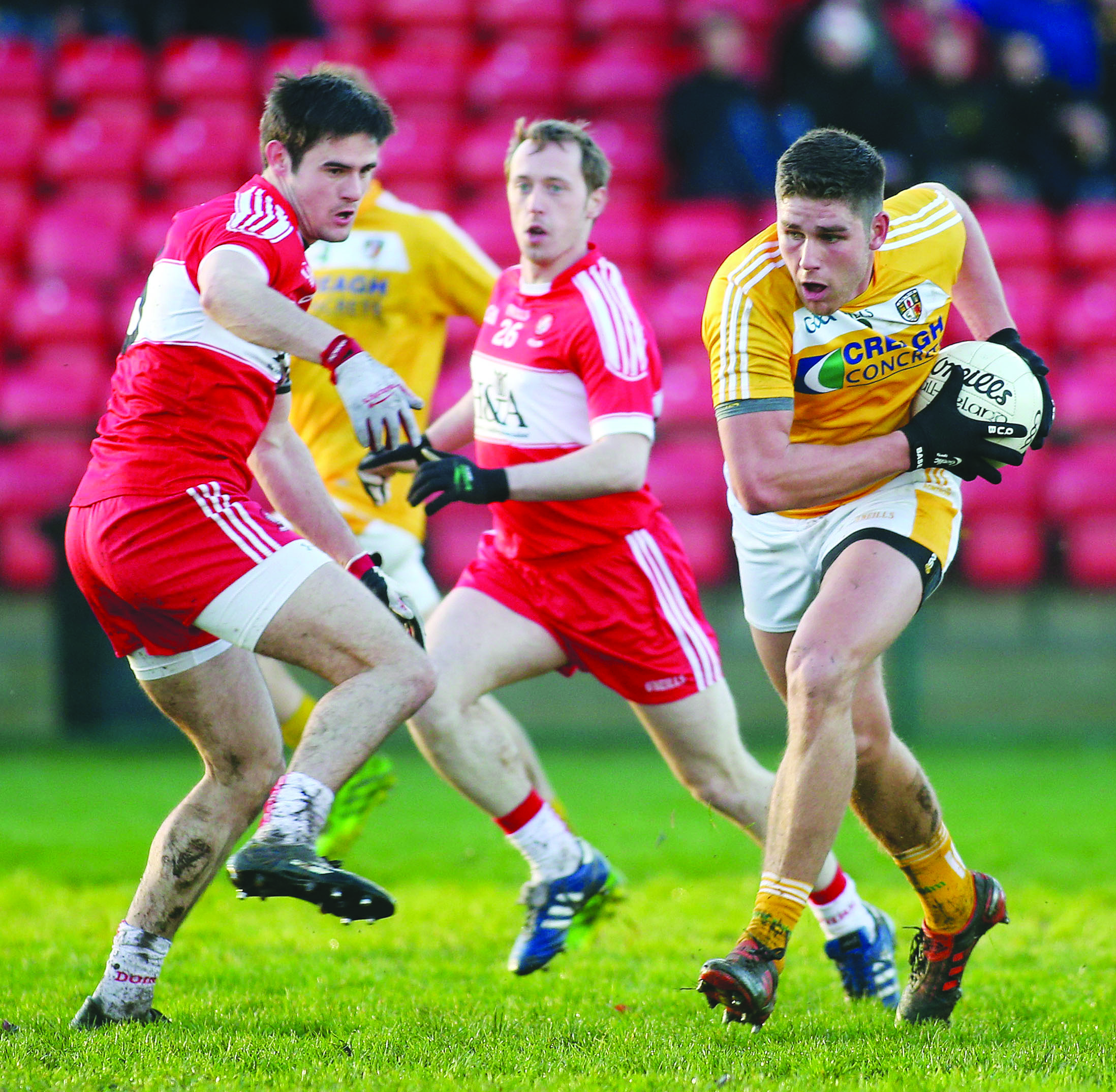 ANTRIM’S 2016 season got off to a disappointing start yesterday after they suffered a 10-point defeat at the hands of Derry in Owenbeg.

The home side cut through the Antrim defence with alarming ease at times and Chris Kerr was forced to make a number of point-blank saves to keep the scoreboard respectable.

However, Kerr was shown the game’s only black card midway through the second-half for hauling down Derry substitute Niall Loughlin. That meant that Ronan Hanna’s first act in the game, as Kerr’s replacement, was to try and save Ryan Bell’s spot-kick, but the Oak Leaf full-forward drilled his shot into the side of the net to help seal an emphatic win for new Derry manager Damien Barton.

Brian ‘Bam’ Neeson announced his return to inter-county action with an exhibition of free-taking on the heavy Owenbeg surface, landing five frees from five attempts.

Michael McCann (0-3) and substitute Colm Fleming (0-2) were also flawless from placed efforts but Antrim struggled to convert from open play.

The Saffrons were comprehensively out-battled in the midfield sector as Derry’s Emmet Bradley and Conor McAtamney dominated throughout.

The afternoon got off to a poor start for Antrim and they conceded their first goal after just five minutes when Liam McGoldrick beat Colm Duffin for pace before slotting the ball past Kerr.

The St Gall’s shot-stopper redeemed himself moments later when he denied James Kielt from close range.

Shane Heavron bagged Derry’s second goal on the 20-minute mark and the Oak Leafers pressed home their advantage with further points from Kielt, Emmet Bradley and the industrious Enda Lynn.

Antrim were given a lifeline on the stroke of half-time when they landed their first score from play after Tomás McCann rounded Derry keeper Eoin McNicholl to fire home following good work from Niblock and Conor Murray.

The latter landed a great point from play with the last kick of the opening half to cut Derry’s advantage to 2-8 to 1-7 at half-time.

Any hopes of an Antrim comeback were soon dashed as Derry plundered their third goal of the game 13 seconds after the restart.

Kielt’s long delivery was punched by Kerr only as far as Shane Heavron, who toe-poked home his second major on his senior debut.

The 2016 opener could have been something of an embarrassment for Antrim following Bell’s penalty on 42 minutes, yet the visitors rallied to outscore their opponents 1-5 to 0-4 in the final quarter of the game.

Duffin’s quick free released McCann on 53 minutes and the Cargin ace rounded McNicholl for a carbon-copy of his first goal. But it proved to be nothing more than a consolation for Antrim who will be hoping for a vastly improved showing against the students of Queen’s on Wednesday night.