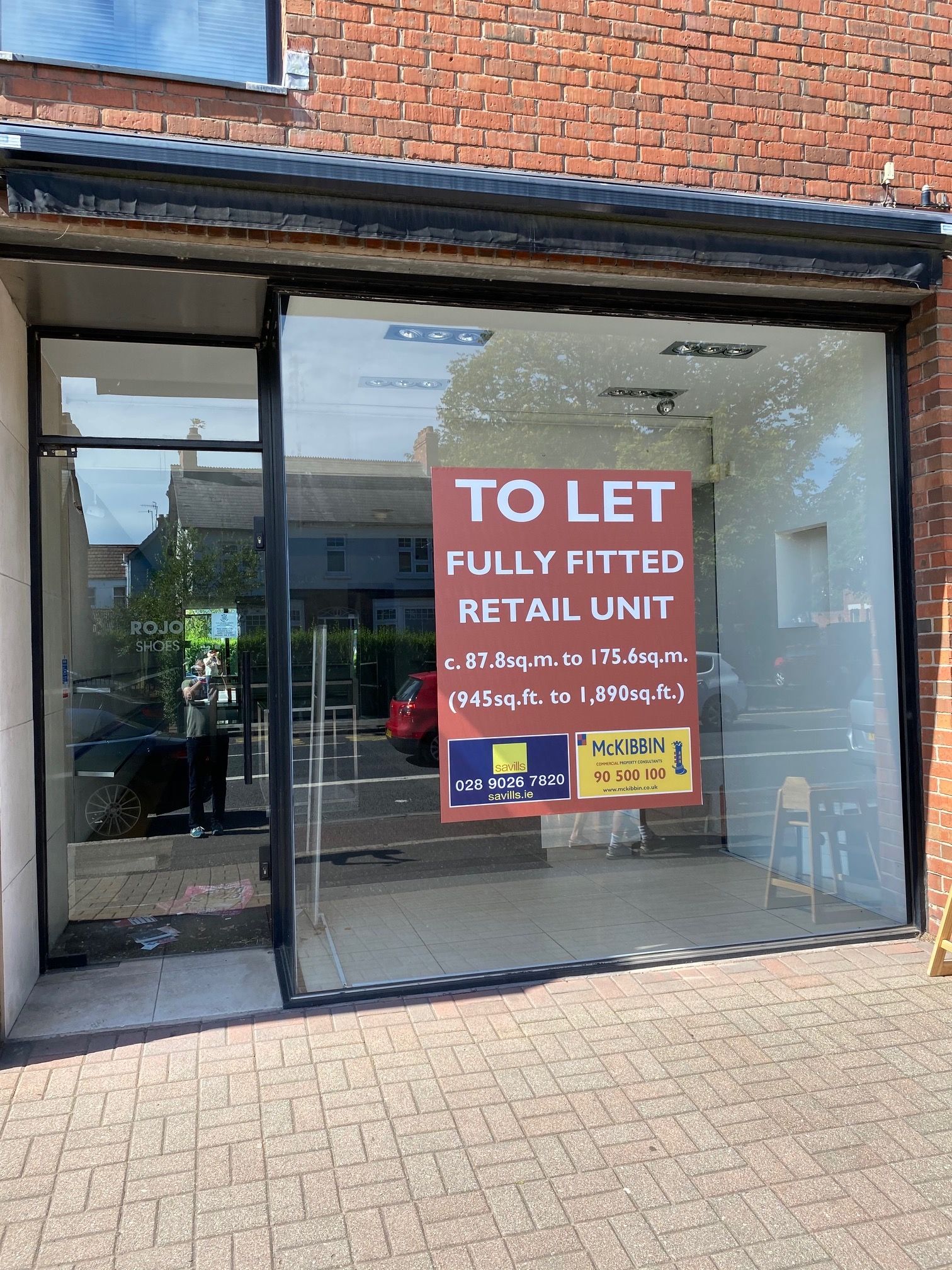 GOVERNMENT SHOULD DO MORE FOR SMALL BUSINESS: A shuttered shop unit available to let on the Lisburn Road

A top economic commentator and property specialist is warning of economic meltdown if the British Government doesn't come through with a £10bn Covid-19 emergency fund for small businesses in the North.

"The red lights are flashing and the response has to be on a par with the crisis which means that we need £10bn to get through this emergency," says real estate executive Conor Devine. "If you look at the crash of 1929, the real pain wasn't felt until a year later. It's the same thing here. The pandemic struck in March and so it will be February-March 2021 when the hammer really comes down on jobs and businesses."

Conor Devine was speaking as the number of empty shop fronts in the city centre and along Belfast's arterial routes continues to climb. "There are 74,000 small businesses in Northern Ireland," he said. "67,000 of those have less than 10 staff and no cash reserves when, as with this pandemic, their turnover goes to zero. The question is, not only, how long will they survive but also what help can they get from government."

Evidence of the collapse of small business activity can be seen in a one third-of-a-mile strip of the once bustling Lisburn Road where some stores have failed to open since the lockdown in March while others, after a struggle, have pulled down the shutters.

With Northern Ireland being cut adrift, no government Covid relief fund worth talking about and no fiscal autonomy !!! https://t.co/4ulr8e0b1j

"Some of those businesses may be back when the Covid storm passes," says Conor. "But others have simply called it a day. I know of friends who have said trying to reboot their business in the pandemic is a headache they just can't handle at the minute. They've decided to put their mental health and their quality of life first rather than get down into the pit to slug this one out with the taxman and their landlord."

A principal with GDP Partnership, Conor Devine says tenants should negotiate with their landlords. "There will have to be a fairer way found to determine rates and rents," he said. "In Dublin, landlords are already taking tenants to court but when that happens here, some tenants will simply give the keys back, adding to the economic slump."

Many retail operations have received a year's rates holiday but that hasn't been enough to stem the flood of closures. "I know because I am in the centre of the property sector that many, many business people are already in dispute with their landlords," adds Conor. "My advice to both sides is, be pragmatic and work something out. Any tenant who thinks the banks will help them should think again. With the exception of the bounce bank loans, there will be no lending to small businesses until this is over. So just as governments are restructuring their debt globally, then landlords and banks need to work with small businesses to restructure their debt."

Only government intervention from London can stem the business bleeding, adds Conor. "Our local politicians need to demand a £10bn Covid rescue package — per capita that's what a European country like Austria has spent. So far, only £1.5bn has come from London. I'm afraid that is not going to cut it. It would be bad enough for Boris not to provide that funding but it will be a bigger shame on our politicians if they don't even ask for it."

You can read more about Conor Devine views on the economy and listen to his podcast on his website.

Our video above shows a range of closed shops and businesses on the Lisburn Road photographed on Saturday 8 August. They include a hairdresser, launderette, cafés and restaurants. Some of these businesses had closed down before the pandemic struck, others closed when the lockdown began but are still hopeful of re-opening. At least one was preparing to move to another location and to continue in business.