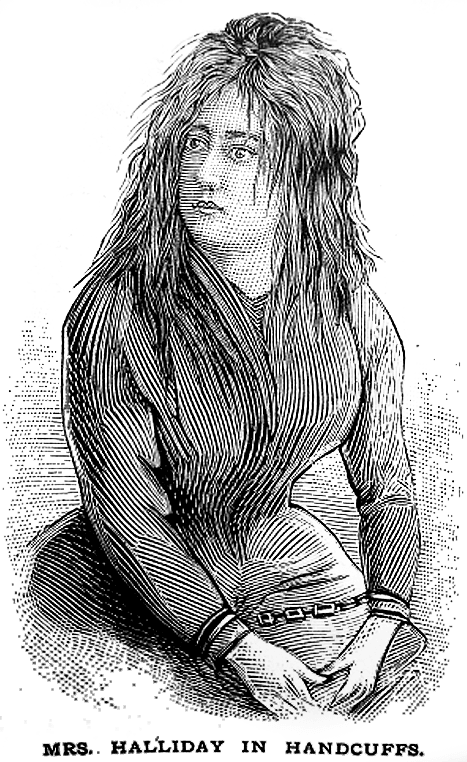 KILLER: A newspaper portrait of Lizzie Halliday from her trial

WHEN Lizzie Halliday’s death was announced in the New York Times in 1918 she was described as the ‘worst woman on earth’.

Lizzie was originally from County Antrim but had migrated to the US several decades earlier. She is identified as the first woman in the US to be sentenced to death by the electric chair, having been found guilty of the murder of her husband Paul Halliday and a mother and daughter, Margaret and Sarah McQuillan, in 1893.

Rumour and speculation surrounded Lizzie Halliday when she stood trial for these murders. It was alleged that she had killed another husband in Belfast before she had emigrated.  She was also asked about the Whitechapel murders committed by the so-called Jack the Ripper in 1888. The fact that she emigrated from Ireland to the US as a child around 1867, means that there could not have been any truth in either of these stories.

Although she might not have been Jack the Ripper, or a husband killer in Belfast, Lizzie Halliday did have a colourful and crime-filled past.  She seems to have had at least four husbands all older than her, several of whom died in suspicious circumstances.  She served time in prison for arson before she met her final husband, Paul Halliday. During this turbulent marriage she was suspected of burning down Paul’s house, killing his son from another relationship who was inside.

When Paul disappeared in August 1893, Lizzie told concerned neighbours that he had merely taken a trip and she arranged for Sarah and Margaret McQuillan to work at her house. But the neighbours, dissatisfied with Lizzie’s account of her husband’s absence, searched her house while she was out. They did not find Paul Halliday but instead they found the bodies of Sarah and Margaret McQuillan in a barn.  Later, Paul’s body was found under the kitchen floorboards.

In the sensational trial that followed much was made of Lizzie’s seemingly bizarre behaviour. At one point when asked her name, she replied, ‘nineteen skunks’!  It was no surprise then, that she was sentenced to death but was not executed and instead was found insane and committed to the Matteawan Criminal Asylum in New York.

Lizzie’s notoriety did not end there.  She was involved in an assault on an asylum attendant in 1895 and in 1906 murdered another attendant, stabbing her over 200 times.

Lizzie is perhaps our most notorious Bad Bridget; she even has her own Wikipedia page!  But most of the women who we have researched in our Arts and Humanities Research Council funded project, are much less well known and have left little historical record.

The Bad Bridget project, led by historians Dr Elaine Farrell, Queen’s University Belfast, and Dr Leanne McCormick, Ulster University, examines Irish women who emigrated to Boston, New York and Toronto between 1838 and 1918 and who were considered criminals or deviants. We tell some of the stories from the project, including that of Lizzie Halliday, in our new Bad Bridget Podcast.

In the five-part podcast, we explore themes of poverty, sex work, unmarried motherhood, alcohol and murder. And we tell many Bad Bridget stories of Irish migrants, some of which are brought to life by the very talented Siobhán McSweeney, known to many as Sister Michael in Derry Girls.

Listen to the Bad Bridget Podcast to hear the untold stories of Irish women’s emigration, the complexities of the experiences in North America, and the similarities and differences to today.  You can find our Bad Bridget Podcast on Apple podcasts, Spotify or wherever you get your podcasts.