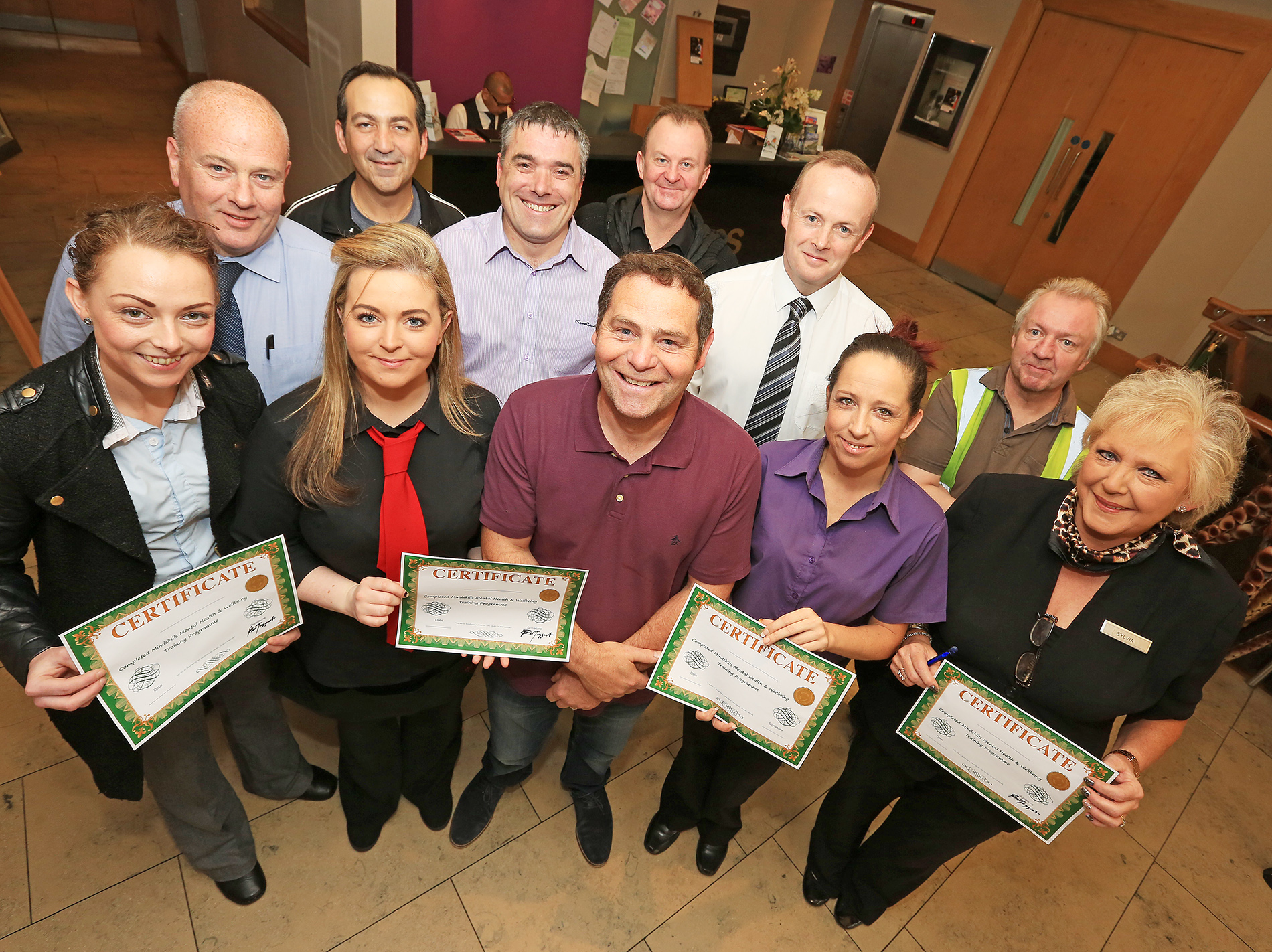 LOOKING OUT FOR OTHERS: ­Phil McTaggart with staff from the Chester and the Lansdowne who completed the vital training

A pioneering project by two bars in North Belfast to identify signs of depression in their customers has been praised as a potentially life-saving scheme.

The Chester Bar and the Lansdowne Hotel, both on the Antrim Road, have equipped their staff with vital skills that will see them become more aware of mental health problems in customers and identify the best way for them to seek help.

The scheme was first thought up by bar manager at the Chester, Gerard Quinn, who has himself battled depress-ion, after what he described as a noticeable rise in the number of local people seeking refuge from their problems in pubs.

“With us being in the local community and a local pub we see a lot of people coming in who are either stressed or suicidal,” said Gerard. “When people are in that mindset they often turn to alcohol as a way of escaping their problems or as a form of courage to harm themselves. I thought if I perhaps raised awareness with our staff of what to look for and ways to help we then can become part of the solution to what appears to be a growing problem here in North Belfast.”

Staff from the Chester and the Lansdowne underwent training with mental health campaigner Philip McTaggart of Mindskills Training and Coaching and have now issued a call for other businesses to join them.

“I would love if other people could see what we’ve done and take that on board for their businesses and their staff and also I would be looking to recruit more of our staff into and take it further,” added Gerard.

“I have worked in the Chester for almost 20 years and there is no doubt that depression has taken a bigger grip on the people we encounter on a daily basis. Often staff working with the public will be the first to encounter someone suffering from depression but we’re not trained to deal with the problem, so I wanted to empower my staff with these skills.

“It’s easy to say it’s not our job but this is a problem rife in our community and as part of the community we have a duty to help as best we can.”

As well as personal support for customers, part of the scheme will also see the introduction of posters, cards and phone numbers placed in the premises for customers who would prefer to seek help privately.

Praising the initiative taken by the two businesses, Philip McTaggart encouraged more people to get involved.

“In all different types of work we come across people feeling down or for whom things aren’t going well. It can be a natural thing to have a bad day but if you’re having a bad day and you are feeling down for more than two weeks then you are moving into depression and it’s time to get help,” he said.

“Depression is a disabling illness but the person who is depressed more than likely doesn’t recognise the problem. Certain signs can be telling, whether that’s sitting in isolation, a change in tone or someone letting you know that they are not feeling their usual self. Usually it’s the likes of a taxi-driver, bar staff or hairdresser who are the first to meet these signs.”

The training will equip staff not only with skills to pick up signs from customers but also direct them towards help.

“Education is power,” added Philip. “Everyone has the skills to help but sometimes we need to recognise the signs that are in front of us. I welcome the fact the Lansdowne and the Chester have taken it upon themselves as a part of the community to stand up and say ‘We are going to be counted when it matters in the fight against suicide.’ I would encourage other businesses, especially those working face-to-face with the public to consider a similar initiative.”

A free training night on suicide prevention is to be held in the Marrowbone Community Centre later this month with details of the event to be posted on the Mindskills Training and Coaching Facebook page. Anyone seeking information can contact Philip McTaggart on 07732350325.