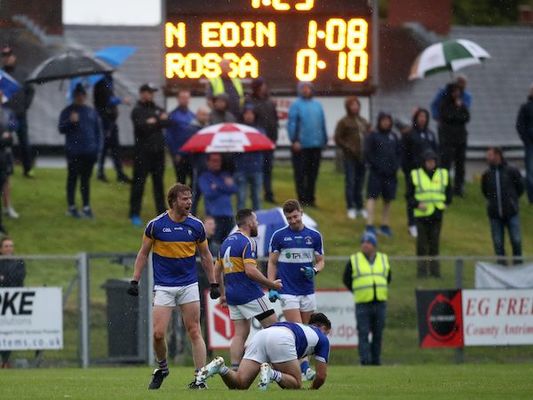 STEPHEN Beatty curled over a wonder score deep into stoppage time to salvage a share of the spoils for Rossa in their opening Championship outing against old rivals St John's at a damp Corrigan Park last night.

With the game around six minutes into time added on and the visitors chasing an equaliser, up popped Beatty to curl over a beauty from around 40 meters out that saw this keenly contested affair perhaps deservedly finish even.

Both teams enjoyed good spells in this game with Rossa moving five clear early in the second period, but a Matthew Fitzpatrick goal swung the pendulum the hosts' way as they went onto to go two in front, but like the first half, St John's failed to add to their tally following the water break as Rossa regained a foothold and found the scores they needed to take something from this game.

Rossa also had to contend with the sin-binning of Sean Pat Donnelly just before the break and Richie Gowdy with 10 to play with Donnelly's also leading to a penalty that drew an incredible save from Mick Byrne.

However, for long stages Rossa enjoyed dominance around the middle and their high ball tactic in the first half also caused problems for St John's who took a while to solve the riddle, with Simon McDonagh's introduction early in the second period helping them begin to get to grips at midfield.

Having lost their opening Group Two game to Lámh Dhearg at the weekend, the Johnnies would have been keen to get an opening victory against their rivals last night although it was Rossa who made the brighter start with Beatty sending in a long ball to Colm Fleming who lost control, but registered and angled the ball over off his left on the turn.

The hosts hit back instantly with Fitzpatrick setting up Sean Wilson, but this drew a response from Dominic McEnhill who managed to break through a couple of challenges and draw the ball over with the outside of his boot from range.

Fitzpatrick then tied the game before giving his side their first lead with an outstanding score from way out on the right, but the sides were level again as Niall Crossan picked up a break and split the posts.

Colm Fleming kicked Rossa into the lead again from a free, but the sides were level for a fourth time when Paddy McBide popped to the advancing Ryan McNulty who drilled the ball over on the left.

There were then a couple of chances for goal when, firstly, Fleming spotted a gap from out left and his delicate effort came off the face of the post with Pearse Donnelly beaten, while at the other end, Fitzpatrick's stinging shot was saved by Byrne.

The sides were locked at 0-4 at the water break, but it was Rossa who seized the initiative with four Fleming points from placed balls to take a 0-8 lead into the break.

It could have been closer as, two minutes before the half, Fitzpatrick was taken out when about to pull the trigger by Sean Pat Donnelly who was shown black and while the challenge looked outside, a penalty was awarded. Fitzpatrick stepped up and struck well, but Byrne spread himself well, diving to his right and saving.

Rossa moved five clear early in the second period, again through a Fleming free, but the game was to to change as four minutes in, as a quick break saw the ball moved inside to Sean Wilson who fed Fitzpatrick and there would be no denying him this time as he composed himself and lifted the ball over the advancing Byrne and into the net.

This lifted the hosts as they now had the momentum and after McBride kicked a free, they were back on terms after 43 minutes as Domhnall Nugent's shot was given as a point despite Rossa protests it had tailed wide.

McBride then kicked a trademark point from play before Nugent again split the posts from the right to see St John's go from five down to two up in the space of 11 minutes as the rain began to get heavier.

They were unable to pick it back up after the water break as Rossa began to gain a foothold although they initially were struggling to create anything going forward. Still, they stuck to the task and while the greasy ball skated free on 54 minutes, Donnelly was there to gather and split the posts to leave just the minimum in it.

Suddenly, the confidence returned for Rossa as St John's then began to lose their way going forward with a couple of poor wides, but it seemed they may just about hold on for the win.

However, with their final attack, Rossa showed patience to create an opening with Gerard Walsh laying off to Beatty who got onto his left and curled over a beauty to level the game for the sixth time and secure a draw ahead of their home opener against Lámh Dhearg on Sunday.