Boxing: O’Neill excited to show improvements on his return to The Devenish 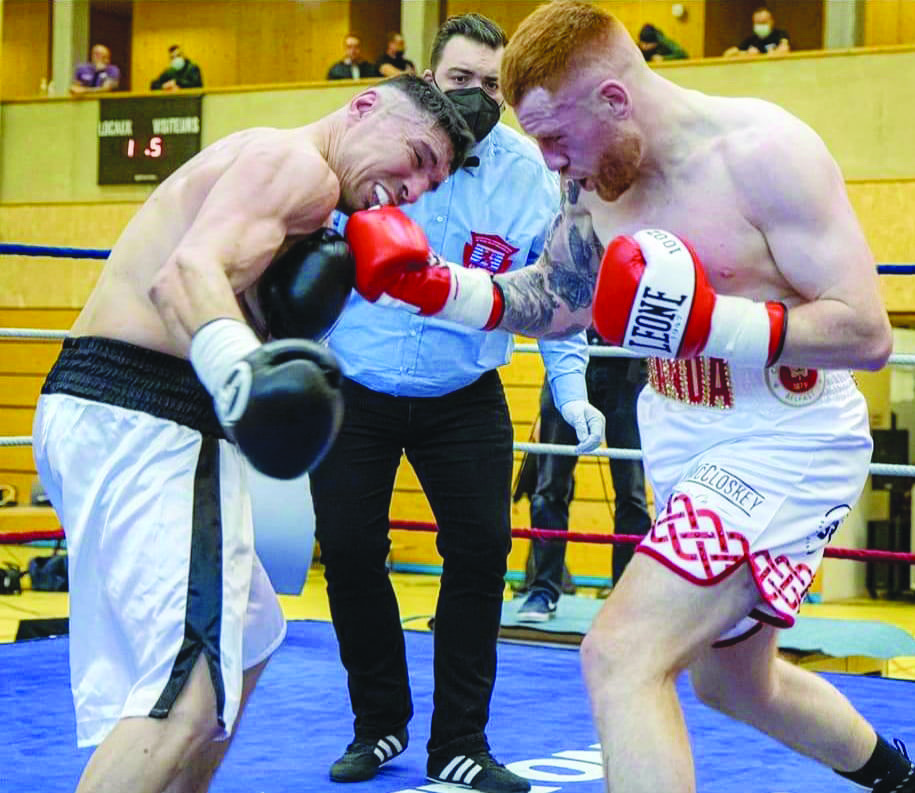 HAVING improved his record to 6-0 with a pair of victories on the road this year, it’s a return to The Devenish for Owen O’Neill as he gets set to top the bill at Celtic Clash 12.

The North Belfast man has continued to make the improvements under trainer Dee Walsh and steps up into his first six-round contest on the seven-fight card.

O’Neill came to boxing late and had a brief amateur career before ditching the vest and deciding to head along the paid path. It has been a case of learning on the job, but there are signs that things are beginning to come together and he looks back at the period of inactivity brought on by the pandemic as one that could well have acted as a blessing as it gave him the time to sharpen his skills.

With confidence high after those road wins where he showed the ability to box and brawl, O’Neill is looking forward to putting into practice what he has been developing in the gym.

“I can’t wait - since my last fight at The Devenish, I’m ten-times the fighter and I can’t wait to show everyone my improvements,” he said.

“The two fights away there were two great experiences. The first one in Luxembourg was just a clear boxing display from myself and the second one in Spain was a lot rougher because of the heat. That was a sluggish fight but also a good experience to be involved in.”

Making the step up into the added rounds represents something of a milestone as the training wheels are now off with the challenges beginning to get tougher.

That will be the case on Saturday night but the 26-year-old light-middleweight is not daunted by the longer distance, instead predicting it will help him fully implement a plan and open the door to a first stoppage win.

“This is going to be my first six-round fight, so I’m hoping to put on a good display and get him out of there,” he insists.

“It will probably be the first time I will have a proper game-plan going into a fight because. In the four-rounders, Dee does tell me to go and work on things in the first and second round, but a six-round fight you can maybe start slow, work on the jab and then bring other things in at the end. I wear people down with body shots and walk people down, so it will suit me to a tee.”

New headliner for @CelticClash 12 at @TheDevenish in Belfast on Saturday night. 😍😍😍😍

O’Neill may be known as ‘The Operator’, but has also been dubbed the ‘Cliftonville Canelo’ due to his features as well as his body work that he hopes will contribute to a career-best win on Saturday.

A stoppage victory will send his typically boisterous support into a greater frenzy, although they will not be as plentiful due to the smaller capacity on Saturday as restrictions remain in place.

Still, he is looking forward to hearing the roar of those who are in the Finaghy venue having been away for two years.

“The left hook to the body is my special punch, but I don’t know what nickname’s better: ‘The Cliftonville Canelo’ or ‘The Operator’, or even ‘OOO’ - they’re all class,” he laughed.

“I only got a handful of tickets this time because of restrictions, so they all went to just family and friends. Hopefully I can get more as I have over 100 names down already and that’s before going onto social media.

“My first fight I did feel the pressure as I didn’t want to get knocked out in front of people, but now I just can’t wait to fight in front of my own people again and to hear that noise. To be fighting in a six-round contest, you do need that support.”

Victory on Saturday would represent another big step forward for O’Neill who has ambitions to push on over the next 12 months.

He is realistic enough to know that he is still a way of fighting for a first title belt, but with confidence in the gym sky-high with titles beginning too roll in, O’Neill has ambitions of joining that band in the future.

“There are two titles in the gym now: Lewis Crocker - (WBO) European champion - and Padraig McCrory - WBC International champion. I want to be the next champion of some sort, whether that’s a Celtic or Irish title,” he insists.

“I’m not saying that’s going to be my next fight or even the one after that, but it’s definitely in the future and I can’t wait for that day to come where I show everyone what I’m about.”

Also on Saturday’s card, Robbie Burke faces Jamie Morrissey, while Eddie Tracey, Jake Harney, plus debutants Cian Doyle and Liam Walsh are to appear. West Belfast’s Michael Corr was also due to make his professional bow, but will have to wait as injury ruled him out.