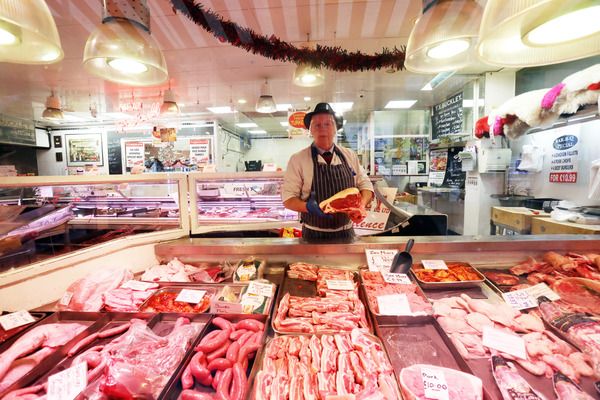 As the chilled meat cliff edge approaches (30 June), it looks increasingly likely that the British government has no intention of getting on with implementing the protocol. The level of engagement with the practicalities is summed up by Lord Frost’s attendance at the G7 summit wearing Union Jack socks. Thankfully, no-one seems to have got close enough to reveal if such insecure flag waving extends to his underwear.

Last December it was agreed that anyone importing meat to the North from Britain needed six months to adjust to the protocol which bars chilled meat products entering the EU single market from a third country (which GB now is). As of 1 July, such goods must be frozen. The issue is far wider than chilled meat and could easily be sorted by agreeing, like Switzerland, to stick to EU standards. That would get rid of the vast majority of border checks at Larne and Belfast ports.

Leaving the European Union and its universe of rules, regulations and social protections, provides buccaneering Britannia with an opportunity to discard the ‘chains’ of food standards and to reduce personal taxation and nanny state interference in people’s lives.

By all accounts, many businesses have used the six-month period to adjust their supply lines. Two of the major supermarket chains are now sourcing chilled meats locally and from across the border, accelerating an already established trend. In 2016, ‘meat and meat preparations’ worth €165 million crossed the border from South to North. By 2020, that figure had almost doubled to €294 million. Meat goes from North to South as well, though in smaller amounts (€83 million in 2020).

According to one BBC report, “Northern Ireland imports around £250 million a year in meat from Britain for further processing”. It imports twice that amount in ‘meat and meat preparations’ from non-British sources – £494 million in 2019, almost all of which comes from EU countries and about 60 per cent from the Republic. This flow of meat from Britain to the North and from North to South would be a worrying risk especially if you didn’t trust the British to maintain standards, given they have made such a big deal out of sovereignty and doing their own thing.

In any event, surely the big issue here is that everyone should be eating a lot less meat, or no meat at all. That’s one of the changes needed if we stand any chance of stopping the planet heating up beyond control.

But such practicalities are not the point apparently. When a Co Down butchery and deli made a virtue of local sourcing last week, a News Letter editorial accused them of downplaying the implications of “the Boris Johnson Irish Sea border betrayal“. So we are now in the territory of Lundy butchers.

Chilled British sausages are a threat to the peace process according to the EU, Alliance, Sinn Fein and the President of the United States.

The farcical Protocol needs to go and go now. pic.twitter.com/IK7KCWoWI7

The News Letter needn’t worry. In the build-up to the G7 gathering, and during the event itself, Johnson’s battle cry was all about the bottom line of sovereignty: “we will do whatever it takes to protect the territorial integrity of the UK”. EU leaders needed to “get it into their heads” that the UK was a single country (but comprises “four nations” for soccer and 3 + 6/32 for rugby). Foreign Secretary Dominic Raab added that the EU was being “bloody-minded” about border checks and “we cannot allow the territorial, constitutional and economic integrity of the UK to be threatened”, as if President Macron had just invaded Rathlin. According to MP Andrew Bridgen we are already in a trade war with the EU led by Macron.

The warm-up for the G7 on the Shankill was just as strident. Defying the law in a “very specific and limited way” – thank you Secretary of State Brandon Lewis – last Thursday’s parade was well-masked and hooded, not so well socially distanced and definitely unnotified. Alongside a “Joe Biden is an Enemy of Ulster” poster, one of the banners read, “Uphold Northern Ireland’s Sovereignty” which, apart from being off-message, suggests an “Independent Ulster” is back on someone’s agenda. “Trigger Article 16” said three banners – don’t worry, they intend to, with or without the incubated threat of loyalist violence.

Brexit is the gift that keeps on giving. It remains undone for as long as the EU is needed as a good enemy. The latest demon is the “legal purism” of the “imperial EU” which expects Britain to implement an agreement it signed “under duress”, writes the editor of the Sunday Telegraph.

Doesn’t the EU understand the principle of breaking international law just a wee bit? It looks like Britain signed the protocol but had no intention of taking it seriously. No wonder Maroš Šefčovič despairingly complains that the British only bring ideology to the table.

What inspires this ideological arrogance? A few weeks before Boris Johnson became prime minister in July 2019, a photographer from The Sun took pictures of the inside of Johnson’s car. On the floor, poking out from beneath a Monkey World bobble hat, is a book written in 2012 by five Tory MPs, four of whom are now ministers in Johnson’s government. The book goes by the liberating title of ‘Britannia Unchained‘. Just because the book was in his car doesn’t mean that Johnson had actually read it, of course.

Britannia Unchained may pre-date Brexit but it gives some clues as to why Johnson and those around him – including arch-opponent of the Good Friday Agreement, Michael Gove – seem to have taken the head staggers over the protocol. If Thatcherism kick-started the neo-liberal economic revolution, Britannia Unchained is designed to take it to the next level. Leaving the European Union and its universe of rules, regulations and social protections, provides buccaneering Britannia with an opportunity to discard the ‘chains’ of food standards and to reduce personal taxation and nanny state interference in people’s lives.

Dominic hasn’t-read-the-GFA Raab is one of the authors. International Trade Secretary Liz Truss, currently negotiating a trade deal with Australia, is another. A third is Kwasi Kwarteng, the Secretary of State for Business, Energy and Industrial Strategy. Last comes Home Secretary Priti Patel who has form, as they say.

As a minister, she withheld funds from the Palestinian territories and was forced to resign for holding undisclosed meetings in Israel. During the Brexit negotiations, a leaked report on ‘no deal’ showed that Ireland’s economy would be hit, with the possibility of food shortages. Seemingly oblivious to the historical connotations, Patel wondered why these threats had not been “pressed home”.

After Johnson appointed her as Home Secretary, Patel was the subject of a Cabinet Office inquiry into a history of alleged bullying across three departments. She was found in breach of the ministerial code. Johnson overruled the finding and his adviser on the code resigned.

SITTING ON HIS HANDS

The most bizarre expression of the newly-minted Britannia was a speech Johnson’s gave at the beginning of February 2020 while he was sitting on his hands as the pandemic loomed. He staged the event in the Painted Hall at the Old Royal Naval College at Greenwich, the ceiling of which is decorated with a huge painting that has King Billy and Queen Mary at the centre.

In that speech, Johnson complained that “free trade is being choked” and that coronavirus will put up trade barriers “beyond what is medically rational”. Luckily, the UK government was ready to save the world: “humanity needs some country… ready to take off its Clark Kent spectacles and leap into the phone booth and emerge with its cloak flowing as the supercharged champion, of the right of the populations of the earth to buy and sell freely among each other.”

No-one tells superman what to do. It may look like these guys don’t know what they are doing half the time, but they certainly know what they believe in. Expect escalation.