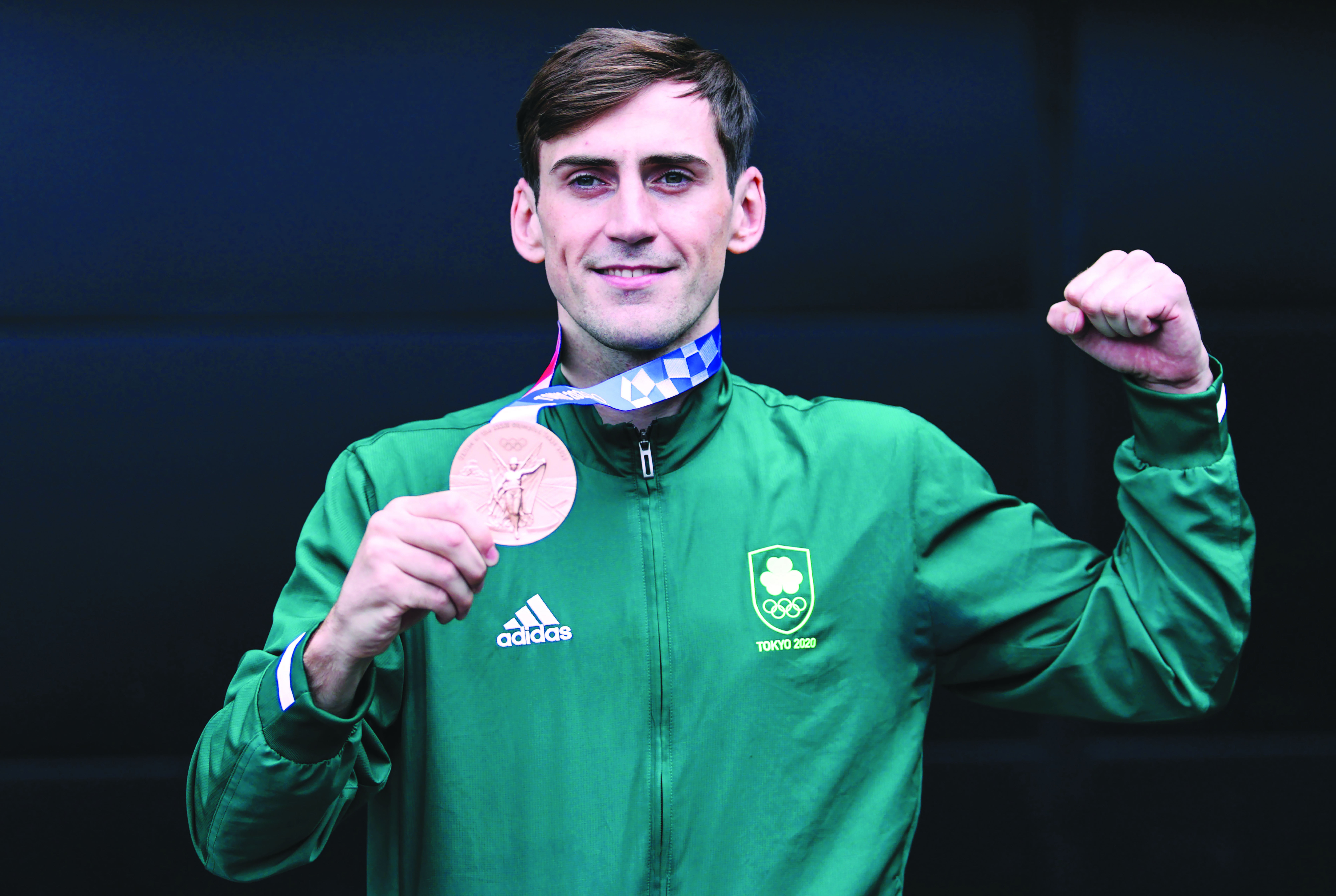 Joint-captain Aidan Walsh won bronze at last year’s Olympic Games and while he travels to the Commonwealth Games with high hopes, is also aware that in boxing nothing is guaranteed INPHO

Hard work and self-belief has brought Aidan Walsh from hopeful to household name. In Birmingham, he intends to lead by example

“You just want the best out of yourself and always aim for that. Whether that’s the Olympics, Commonwealth Games or life - you just want to do your best and if you do, then you can’t question that.”

BEING the best version of himself is what Aidan Walsh has always strived for and it would be fair to say that it is an approach that has proved successful.

A Commonwealth Youth gold medal in 2015 was evidence of a fresh talent ready to break onto the scene at senior level and an Ulster Elite title two years later would ensure he earned his place on the team for the 2018 Commonwealth Games at the Gold Coast in Australia.

Racking up three wins, it was in the final where Pat McCormack - who would prove to be something of a nemesis - gained the upper hand, but silver was not a bad return from a first major senior tournament.

The timing of his first Irish Elite title in 2019 couldn’t have been better as it proved to be vital in terms of landing the number one spot at welterweight for the Olympic Qualifiers and whilst Covid would disrupt that tournament, Walsh would hold his nerve and do what was needed to earn his place at the delayed Tokyo Games.

If Walsh’s name wasn’t well known prior to the Games, he quickly changed that with his matador performances at the Ryōgoku Kokugikan to overcome France’s Wahid Hambli and Merven Clair of Mauritius securing a place on the podium, but his outpouring of emotion after that quarter-final victory resulted in a freak ankle injury that kept him out of the semi-final against McCormack.

Still, from largely unheralded outside of the inner sanctum of Irish boxing to a household name in the space of a few weeks, the Black’s Road man has quickly asserted himself as one of the leading lights in the sport.

He enters this week’s Commonwealth Games with high hopes of turning the 2018 silver into gold this time around, but at joint-captain of the boxing team, he is also keen to see his team-mates including older sister Michaela become the best they can be.

“Four years ago, if someone had said I’d still be about for the next Commonwealth Games as an Olympian, it would have been hard to believe,” said the 25-year-old at the team’s base at Jordanstown.

“It’s great to be in that position and the team we have is great with a load of fresh talent who are on the Irish team, so we’ve all been away training together. There’s a great buzz and that’s amazing.

“Everyone said that getting to the Olympics would change my life and then winning an Olympic medal would change it.

“It’s obviously great and something I’ve dreamed of since I was a kid.

“Coming up, I was only really known around the Belfast scene but not internationally, so going to the last Commonwealth Games and winning a silver medal pushed me on massively to qualify for the Olympics and go onto win a medal.

“To be picked for my second Commonwealth Games alongside my sister again is amazing. If someone had said a few years ago I’d still be doing all this with my sister, I would have grabbed it with both hands.

“I’m just grateful to still be a part of it and competing. Who knows if this will be my last Commonwealth Games or maybe there may be another one.”

Team N.I have departed for @birminghamcg22 🥊

With the qualification process for the Paris Olympics due to begin next year and Walsh one of the leading lights, most would expect he will be targeting the 2024 Games, but nothing is guaranteed in boxing.

The lure of the professional code is always there, but so too is the danger of injury or simply a lack of form resulting in being leapfrogged in the pecking order for international competitions.

Walsh had to take some time out after Tokyo to rest and recover from that ankle injury, so was not in Armenia for this year’s European Championships where Irish boxing uncovered some new stars.

The Commonwealths have always been on his mind, however, and he intends to give it is all.

“Coming back after the Olympics, there were a lot of tournaments but the Commonwealth Games were my main goal,” he explained.

“I just want to give everything to this as who knows whether I’ll be around for the next ones as they’re every four years, so I just want to go in fresh and ready to go.

“After the Olympics, there’s always questions about whether you stick about or go professional, but nobody knows the future - if you want to make God laugh, tell him your plans.

“I just take each day as it comes and I’m delighted to be on the Commonwealth Games team with my sister - our second together as well as the Olympics - so who knows what we’ll be doing although I think there are big things in the future.”

Big sister Michaela has always been a big influence on his journey, but Aidan also looks back on the Gold Coast and recalls the help and advice the most experienced members of the team gave him, a rookie in major competition at the time.

“The Commonwealth Games are the closest you will get to the Olympics and before I went last time, I had a lot of questions for Michaela about what the Glasgow games were like where she got a silver medal, what the pressure was like about fighting in the final,” he continued.

“Also, the lads like Brendan Irvine who had a lot more experience than me. He was the ultimate professional in how he recovered, how he trained and of course was an Olympian then, so learning off him and Michaela was massive and advice I could get off them and anyone who had been there and done it was a massive help.”

Every day is a learning day and Walsh is humble enough to take on board any pieces of advice he can in order to be that best version of himself.

Now, he is the leader on the team the newcomers on the team seek out for advice and he is only too happy to help.

Preparation is key and Walsh now knows what it takes to time his run to perfection so he can deliver the performances required, but is also humble enough to make the tweaks to find the extra few per cent that could see that gold medal secured after the silver finish in 2018.

“I’m always learning so I look to what worked the last time and what didn’t,” he outlined.

“Going into these Games with a bit more experience maybe encourages the younger ones on the team to look to me, but if not then they have their own path to create their own history.

“If I can be of any help to the young boxers on the team, I’m always willing to do that and I’m here to help anybody. Michaela is even more experienced than me and I’m still asking her questions. You never stop learning in this game and the more you ask and want to learn, the better prepared you will be for events like this.”