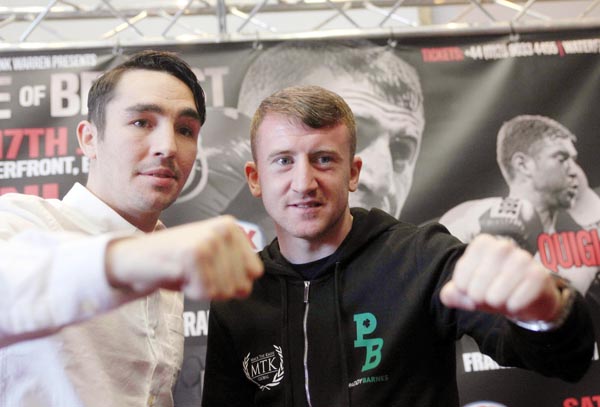 JAMIE Conlan is on the verge of securing a world title fight and younger brother Michael could be on the card for a Belfast showdown later this year.

Conlan will return to the ring at the Waterfront Hall on June 17 and was in Belfast on Tuesday to promote the fight along with co-headliner Paddy Barnes.

However, discussion swiftly moved past Conlan’s forthcoming eight-rounder and onto a possible world title fight with Rex Tso from Hong Kong. The current holder is Japan’s Naoya Inoue but he is set to move up in weight after a title defence later this month, vacating the belt in the process.

Conlan says discussions with the WBO have been progressing well and he could fight for the title as early as September. However, that date would be too early to have Michael box on the undercard as Top Rank are keen to have the former Olympic bronze medallist fight in his home city towards the end of the year. Jamie is optimistic that a deal can be done to have the brothers fight on the same bill.

“The WBC had offered their number nine fighter and BT Sport wanted it but (Matthew) Macklin had said that I was a lot closer than what they think,” said Conlan.

“We are pretty close with the WBO and it seems like it’s all basically done,” said Jamie yesterday.

“He’s been talking to Carl Moretti (Top Rank) a lot about the possibility of Belfast after the summer.

“It helps that Michael is also with Top Rank and he’s looking to come back after the summer.”

Michael Conlan is scheduled to make his second professional outing later this month in Chicago and Jamie revealed his camp for his June 17 fight will include a 10-day stopover in the US city when he will train alongside his sibling.

While the elder Conlan looks set to fight in his home city for at least his next two fights, he admitted he was prepared to forgo home advantage if it meant securing a world title shot against Tso. However, Macklin, who manages both brothers and Michael’s promoters Top Rank felt a Belfast bill was the better option.

“I’m up for going to Hong Kong or Macau,” said Jamie.

“I think half the Falls were saying they'd like an away day.

“It would be a bit surreal seeing some fellas from West Belfast hanging around China.

“It would be brilliant, but Top Rank were of the same notion that we can create something here with myself and Michael and build something. “Everyone at MTK was saying the same thing.

“Alright, you might get four times more money to go to Macau, but if you win, it's what comes after that financially.

“They told me to just go and get the world title, become world champion and then reap the rewards.

“If we can get it in Belfast then we can create something here that can give us the extra two per cent, because every little bit matters.”

Meanwhile, Paddy Barnes admits he is taking a gamble in challenging for the vacant WBO European flyweight title in just his third professional bout.

“I have never been past six rounds so it is going to be a challenge to go the extra four rounds with somebody who is coming to fight. But it is a challenge I am looking forward to,” said Barnes.

“I have to try and slow down in sparring.

“Having said that, I still think I could go 10 rounds flat out. It isn’t even about the step up in rounds, it is a step up in class.

“He has fought for a world title. He is a former European champion.

“He is coming to win against someone who is only 2-0.

“I am ready to fight. I am ticking the boxes off before moving on to bigger and better things.

“I would love to fight some of the biggest names in the division.”

The stacked Waterfront Bill will be broadcast live on Box Nation and also features the pro debut of Irish Olympian David Oliver Joyce while local boxers Steven Ward and Lewis Crocker will also return to action next month.

Dubliners Jono Carroll and Stephen Ormond will also challenge for European titles on the night against Liverpool’s Johnny Quigley and Craig Evans of Wales respectively.