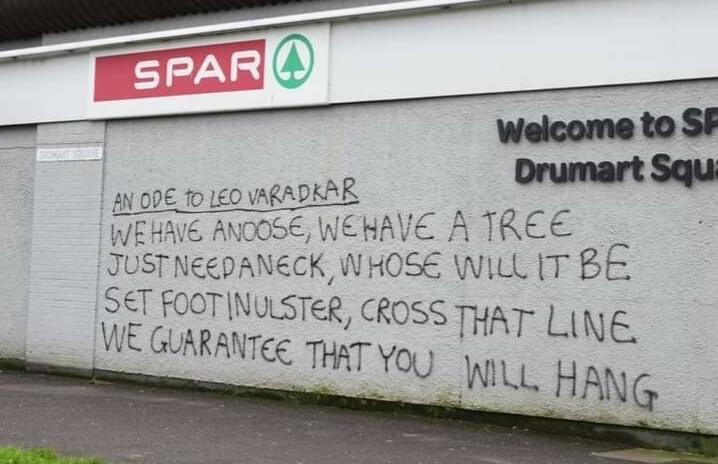 WRITING ON THE WALL: Despite its bluster, loyalism does not have the muscle or the impact that it once had

BREXIT, Trump, the feeble campaign for continued union with Britain – what do they all have in common? Facts and figures matter little as heart strings and violins are played. The campaigns are based on feelings, so facts become annoyances and are viewed with contempt. Truth becomes a casualty as, left unprotected, it is never strong enough in the battle.

When Donald Trump’s position started to crumble, he blamed everyone else. He won the presidency by making people feel empowered to disregard their minds and engage in base instincts; he legitimised hate and visceral greed. Thought and reason were cast aside.

When he lost the election, he resorted to lying and rabble-rousing. When that turned violent, five people died in the attack on Capitol Buildings directly as a result of his fear of losing power.

Loyalists: We have been left behind**, we aren't listened to and don't have a voice.

**You weren't left behind, you have chosen to stay behind! pic.twitter.com/50d4cDjK7g

Almost immediately Trump abandoned those willing to fight for him just in case criminal proceedings are taken against him. He literally led his people to the Hill – and left them there. Sound familiar?

On this island we have had to put up with five decades of this mentality.  In 1968 the partitioned statelet built on discrimination and murder was challenged by sensible people who sought a fair shout in life. And since that moment there has been unthinking reaction from those who perceive themselves to be losing, and still it continues.

We are right now in the decade of constitutional change. Watch those unionists who have once said “Bring it on” regarding a Border Poll. They know change is coming and they have their own baying mobs who they will march up hills when they want to turn up the temperature. The NIO has begun “consulting” with those “stakeholders” in loyalism. Days later, coincidentally (or not?), Billy Hutchinson has said loyalism may move away from the Good Friday Agreement.

Since loyalism ate itself from the inside out in drugs territory feuds, they have long abandoned the Good Friday Agreement. They stood by and let school children have bombs and bags of urine thrown at them while creating a narrative of victimhood and dispossession. The narrative that nationalism has more capacity, is better educated and is more confident took on a legitimacy and currency and Irish presidents and American philanthropy have indulged it rather than confront it.

Facts were dismissed or disregarded, the ongoing criminal activity of these gangs was not confronted with rigour, and the British state with its agents in those gangs was never held to account.

So as the constitutional question gains more currency, expect to see flexing of loyalist muscle. It will have far less impact than it used to, though. The big numbers of those wanting to vote for European Union membership and a more prosperous and equal island will be immune to it.  But there are, as yet, unanswered questions.

What is the PSNI doing to ensure that militant loyalism will not be allowed to influence or disrupt a constitutional debate?  And what is the British government saying to its agents in their stakeholder meetings to ensure that the Good Friday Agreement is safeguarded?