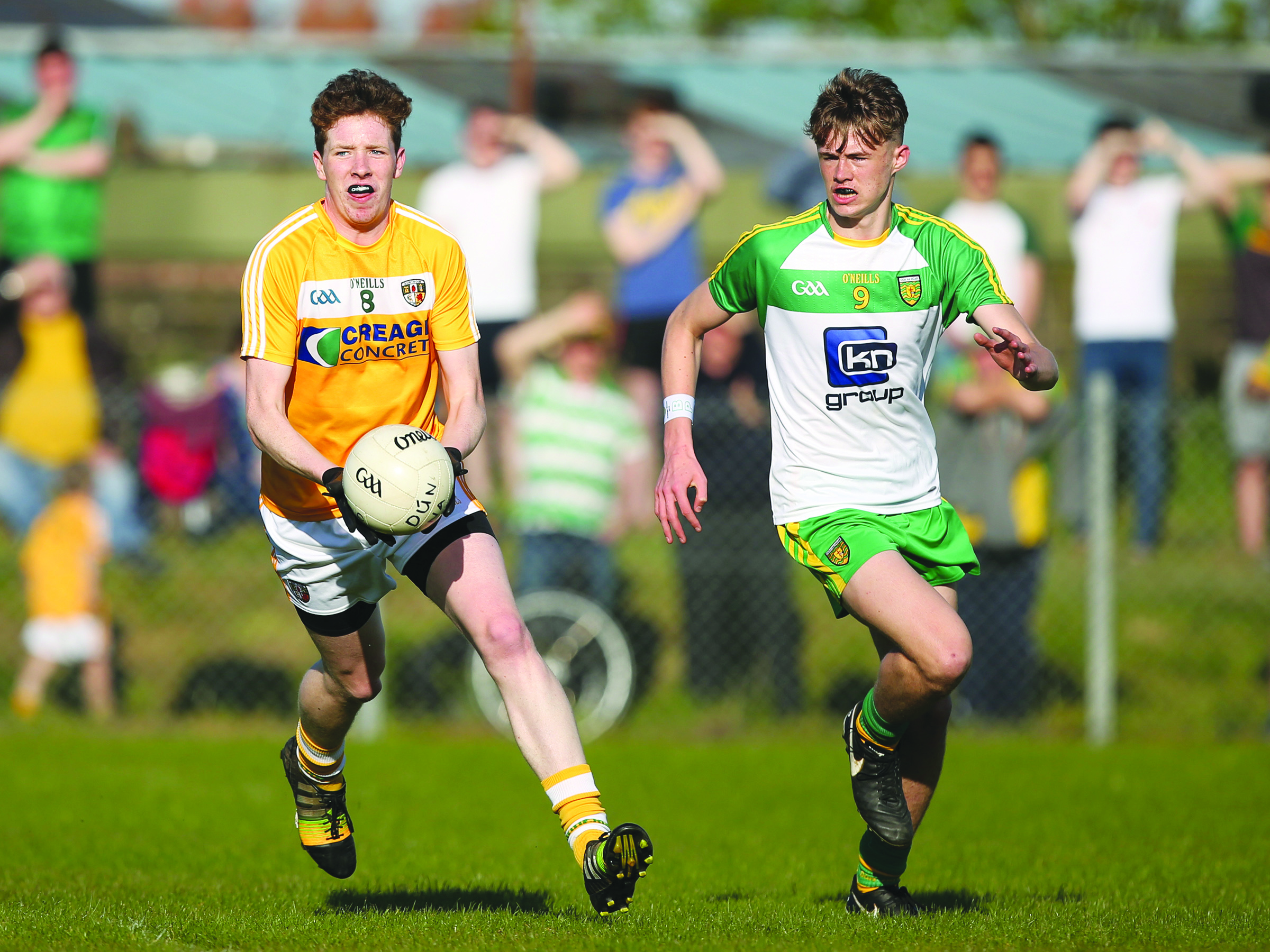 When Eamonn Fyfe bagged his second goal on 49 minutes, it was looking good for Hugh McGettigan’s side, but the visitors hit back with two goals inside a minute from Peadar Mogan and Shane McGrath to wipe out the lead.

Niall O’Donnell was outstanding as he finished with 0-5 from play in a game that saw both sides play with 14 players for just under half of the game.
“He is a first class player,” said McGettigan.

“We really did worry about him. He drifted in between centre half and full-forward. We thought we had him at times, but he is a first class operator, one of the best in Ireland and we just have to live with that.”

In all, it was cruel luck on Antrim who played some excellent stuff at times with substitute, Eamon Fyffe terrorising the Donegal defence at times and landing 2-3.
“Eamonn is capable of that any day of the week,” added the Antrim manager.

“Hopefully he learns from this experience and moves on from here into senior football because he’s a special talent.”

On a fine, sunny evening, the visitors opened brightly and could, probably should have had a goal within 20 seconds when Eoghan McGettigan fed the on-rushing O'Donnell who was through on goal, but his rasping shot clipped the top of the bar and went over.

Antrim enjoyed most of the ball in the early stages, but were unable to penetrate the packed Donegal defence and missed a couple of scorable frees.
They eventually got back on terms 10 minutes in when Dermot McErlain converted a free, but Donegal responded with a Aidan McLaughlin score and a long free from Jason McGee.

Kevin Small and Mogan traded frees before Antrim took a grip on the game in the closing stages of the half with Eoin Nagle kicking an excellent point from the right and Michael Hagan converting a free to leave the sides tied at 0-4 at the break.

The game really came to life after the break with Donegal's McGettigan given a straight red for an off-the-ball incident before Antrim were also reduced to 14 with Paul Mulholland first shown a black card and then red immediately after by referee, Maggie Farrelly.

This didn't upset the hosts though as on 35 minutes, Fyffe weaved in from the right and his drive hit the underside of the bar and bounced over the line.
Donegal's McGee was then shown black while Fyffe thumped over a score to move Antrim four ahead.

Back came Donegal with O'Donnell kicking two points and another from Shane Ferry to leave one in it, but Antrim were not for wilting and Fyffe kicked two points either side of a Mogan score to move two clear.

It was to get even better for the Saffrons on 49 minutes as a loose kick-out gifted Fyffe a goalscoring chance and the Glenravel man took full advantage, blasting home as a shock seemed a real prospect.

However, Donegal responded brilliantly as from their next attack, the ball was worked to Mogan who fired low into the net. A minute later and they had the ball in the net again. This time a long JD Boyle delivery was broken to McGrath who blasted to the net to give Donegal a one point lead.

Antrim tried to find a way back as Donegal's Odhran McFadden was black carded, but space was at a premium as Donegal counter attacked well with O'Donnell kicking two fine scores after Kieran Gallagher had tapped over following an Antrim error to move clear and book their place in the semi-final.

“Donegal are the Ulster Minor League champions and have won it three years in-a-row now,” noted McGettigan.
“They are a very competitive team, beat us by 12 points the last time we played them so from that point of view, we were delighted to hit the front and be five points up at one stage.

“With a wee bit more experience, we could maybe have held out and did a bit more. We are disappointed in one respect, but we are very proud of the lads on another level.
“We are delighted with their attitude, performance and discipline. They wat they have got on this year and taking that Ulster League Plate was massive, beating Tyrone and Derry, going so close here today…. They are the sort of things we asked at the start of the year. Hopefully they will go on now and play senior football for their clubs, play senior county and maybe this can be a new dawn for Antrim football.”

Antrim will rue a number of missed chances including six scorable frees that either went wide or dropped short, but certainly all in the very healthy crowd were delighted with the performance of the young Saffrons who gave a performance to be proud of.

“At half-time we though that with a few frees we probably should have put away, we could have been a couple of points up,” added the Saffrons’ boss.
“That’s the way the game went. Maybe they thought they would come out in the second half and waltz all over us, but these lads are first class.

“They have a great spirit and a great attitude. We were nearly there, but we gave everyone here a bit of excitement and it’s great to see the crowds out in Corrigan Park. Everyone there was thrilled, so I think if the lads go out and play honest football, everyone is happy.”