Five reasons why you need to go to the Belfast Classic 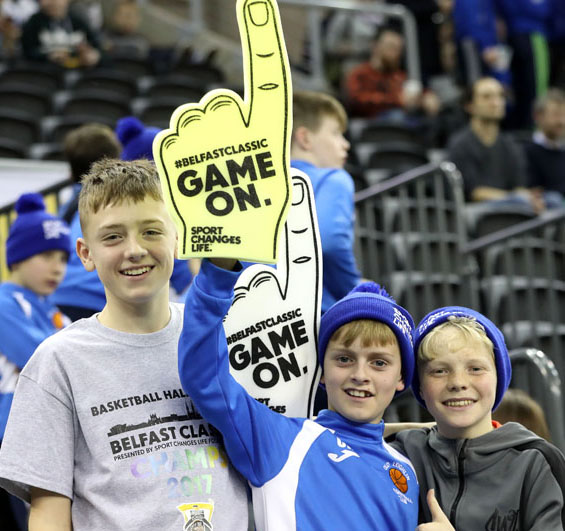 SLAM DUNK: On the ready for the Belfast Classic at the SSE Arena at the end of the month

It’s just one month to go until the welcome return of this year’s Basketball Hall of Fame Belfast Classic Tournament, which will take place from the November 29 – December 1 at Belfast’s SSE Arena.
As we count down to the return of big basketball to Belfast, here are five reasons why the Basketball Hall of Fame Belfast Classic is an event not to be missed by basketball fans or those looking for something different to do in our city.

A unique opportunity outside of the States
The Basketball Hall of Fame Belfast Classic is the only NCAA Division I collegiate basketball tournament authorised to be played outside of the USA, meaning fans will be treated to world-class basketball players who will play in our own back yard in an unparalleled tournament atmosphere at the SSE Arena Belfast.
The Belfast Classic is a big deal too, for the student athletes who will get the rare opportunity to travel internationally with their teams to go head-to-head to try to win the Belfast Classic Cup.

Massive Dunks
Some of the best basketballers in America will travel from sporting schools as far away as New York, Texas, Wisconsin and California to take part in the Belfast Classic, and with an average height of 6’6, fans can expect to enjoy massive dunks as players take to the air to sink shots for their teams in hopes of winning the coveted Belfast Classic Cup.
Some of these players could be America’s next generation of professional basketballers, meaning local spectators may get the opportunity to witness the next big players hit the court whilst enjoying plenty of precision dribbling, big passes, and fast-paced gameplay that is sure to keep them on edges of their seats.

The pinnacle of two weeks of American Sport in Belfast
November will see two weeks of all-American sport take over Belfast’s SSE Arena.
The fourth Friendship Four Tournament will take place on Thanksgiving weekend (November 23-24) which comprises of NCAA Division I men’s ice hockey teams travelling to Belfast to compete for the Belphot Trophy.
The two weeks of sporting excellence will peak with The Basketball Hall of Fame Belfast Classic which will see eight teams go head-to-head for the Belfast Classic Cup over three days of intense game play held alongside a celebration of the sport of basketball, a sport which continues to grow on the island of Ireland.
School Spirit
Known for their sparkling school spirit and enthusiastic support for their student athletes, the American colleges and universities travelling to the Belfast Classic will have school spirit in abundance.
Travelling with their support staff, friends, families and cheer and dance teams who will lead chants in support of their favourite players, the atmosphere will be electric as fans at the SSE Arena join in to cheer on their teams to victory.

Family fun for all ages
Offering loads of fun and entertainment for the whole family, the Basketball Hall of Fame Belfast Classic will be complemented by the Fan Zone which throughout the weekend tournament.
With plenty of interactive basketball-themed games and activities, exhibitions by skilled players, and opportunities to get involved in supporting your favourite teams, families can immerse themselves in the festivities including the popular ‘Be a Mascot’ competition, which will give young people the opportunity to become the star of the show as they walk out on to centre court hand in hand with an NCAA Division I basketball player before gameplay begins.
For more information on the Basketball Hall of Fame Belfast Classic visit www.belfastbasketballclassic.com or follow the event on Facebook and Instagram @belfastbasketballclassic and Twitter @BelfastClassic.