From the ’Murph to Monaco 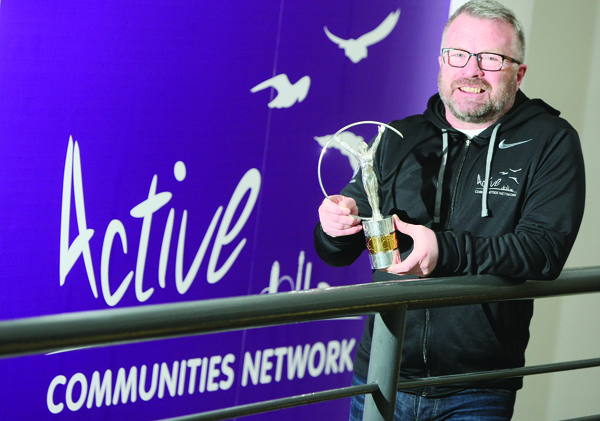 FRESH off the plane after a whirlwind few days in Monaco, Jim Donnelly, Director of Programmes for Active Communities, spoke to the Andersonstown News about the work his organisation carries out and the award he and Ballymurphy man Dean McComb received at the star-studded awards ceremony.
Jim, also from Ballymurphy, has worked for Active Communites for the past seven years in various roles.
“I’m Director for all of our programmes in Belfast, London, Manchester and Portsmouth. Seven years ago I started off with a programme in Ballymurphy called the Goals Project (Generating Opportunities and Learning Through Sport) where we worked with a small group of disengaged young people.
“I took on managing five years ago. We have grown from a portacabin in Newhill, to BIFHE on the Whiterock Road and now we are based in Twin Spires. We work across Belfast and the North.
“We use sport to engage with young people, that in turn leads on to personal and social development. We encourage them to engage with their community through social action projects or celebration events. It’s about getting young people to feel they belong and to take ownership of the projects they’re involved in.
“It’s about giving back.
“We ran a programme recently for Belfast City Council where we were to get 60 people from all over Belfast employment ready – 15 from north, south, east and west. At the end we got 32 into employment – our outcomes have been really good.”
International soccer and rugby players have visited and worked with the programme in Belfast.
“We have had Crystal Palace players over engaging with our young people. Rio Ferdinand was here as was Brian O’Driscoll and Tommy Bowe and Sean Fitzpatrick.”
Describing his job Jim said: “There isn’t an average day here, you could be dealing with issues in Belfast or London and then the odd day you find yourself flying business class to Monaco and staying in five star hotels!”
Jim is of course referring to last week when he, along with Dean McComb were awarded the Laureus ‘Sport for Good Award’ in a star-studded ceremony in Monaco.
“We were delighted to receive the award. They asked us to send them through some case studies, they came back to us and said they wanted to make a short film about myself and Dean. I think it was then the penny dropped that we had won.
“Dean was one of our first participants, he now volunteers with us. He came back to us shortly after his fiancée died, he came to my home one evening and said he wanted to be a volunteer. He’s doing so well, he’s now running a boxing tournament while gaining qualifications.”
Describing his trip to Monaco Jim said: “It was surreal, I was very conscious to not get carried away but I remember sitting having lunch with Dean on the day of the awards and at the table beside us was Ryan Giggs, Del Piero, Raúl, Cafu, Shevchenko, Luís Figo and Ruud Gullit.
“I remember them all playing – I couldn’t believe we were sitting with them. They all introduced themselves and were talking away to us. They were so down to earth.
“Roger Federer took a selfie along with us and the prince and princess of Monaco, it was unbelievable.
“Dean was delighted, the award ceremony was shown on TV on Sunday night and he was ringing me, he couldn’t believe it. They showed the video they’d made about him, it was a very special moment for him.”
Talking about what Dean will do next Jim said: “He will continue to volunteer with us as well as gaining all his qualifications along the way. He has a placement coming up in South Belfast and he will be helping to run a boxing tournament in March. He was one of our first participants years ago and now he’s back with us. It feels like a real achievement for him and us.”