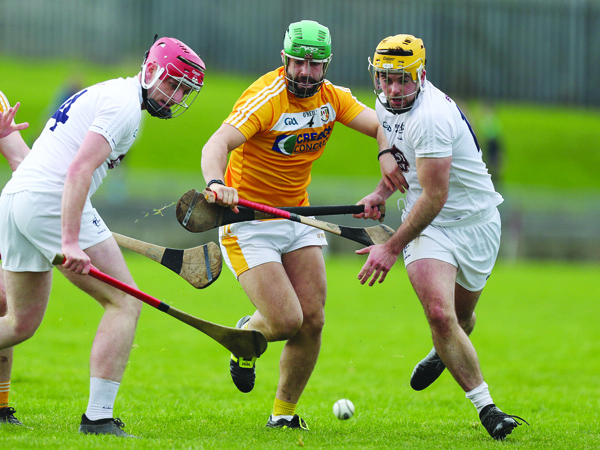 Antrim hurler, Ciaran Johnston says he was shocked to learn the scale of the homelessness epidemic in Ireland

A NUMBER of local inter-county hurlers, footballers, camógs and ladies footballers who are determined to make a difference, have committed to join a 12 hour sleep-out to raise awareness and funds for the homeless on Saturday, December 16 from 6pm-6am.

In Belfast, Antrim players, past and present will be taking part with former camogie star, Jane Adams the latest to sign up to the initiative that has been organised by the newly-formed group, Gaelic Voices for Change which is supported by players nationwide.

On Monday night, a number of those taking part were invited on RTE’s Claire Byrne Live to give an insight into the sleep-out and one of those, Antrim and St John’s player, Ciaran Johnston says the initiative is a natural fit for GAA stars given the community ethos of the Association.

“The initial process was just to shine a light on the issues we thought really needed addressed.

“As GAA players, who have that unique opportunity to use your voice to mobilise change and that was one the key aspects, to use the platform we have in our community and society because the GAA is built on community.
“In every city and village throughout Ireland that is very important so we are trying to utilise that as much as possible and use our position in society for a positive change.”

Already, the venture has raised almost €6000 for homeless charities and as the night approaches, it is hoped that sum will greatly increase.

Ciaran will join a number of Antrim players from across all codes in the sleep-out that will show solidarity and highlight an increasing problem in society.

During their research, the Gaelic Voices for Change group met with leading experts in the area of homelessness. They are alarmed by ISPCC reports that Ireland now has the highest child homelessness rate in Europe and that, according to Focus Ireland, there has been a 24 per cent increase in homelessness in the past year.

“Our location in Belfast will be in Cornmarket and the whole thing we are trying to do is drive the message home of awareness around homelessness,” Ciaran explained.

“From January to March this year, in the North alone there have been 1500 more cases (of homelessness) reported than in the same period last year.

“In the South, it has the highest rate of homelessness in Europe and that is staggering. I think that’s why a lot of us agreed to focus in on that.”

With Christmas fast approaching, it is hoped the spirit of goodwill can translate into a very successful night for all involved that will benefit some of the most vulnerable in our society.

The sense of community and volunteerism is at the heart of the GAA, so it is no surprise top-level players are using their position as a force for good and Ciaran is hopeful their initiative can make a huge difference going forward.

“I think the response has been very positive, especially over the last week or so,” he continued.
“As we get more coverage in the media,the campaign has snowballed. I think that shows the caring there is in society.

“When it’s in your own community, like Belfast where I’ll be sleeping out, it makes a difference and somewhere you want to make a change. The key aspect for us was to get in as many different cities and towns across Ireland to get that community feel.

“We have set up our own individual pages and there is a generic page where people can donate. The donations will be going to foundations like the Simon Community, St Vincent De Paul, Fr Peter McVerry Trust and all of these organisations will benefit fro the funds.

“We are hoping to raise as much money as possible to try and initiate change and help people.”

The group are also appealing for help with tea and coffee, food, sleeping bags, music and entertainment, and fundraising in each of the sleep-out locations. People can also support by donating online at www.gaelicvoicesforchange.com.
The group are on Twitter and Instagram @GaelicVoices4Ch and on Facebook at ‘Gaelic Voices For Change’.