Gaelic Games: Antrim and Fermanagh must do it all again in LGFA Junior final 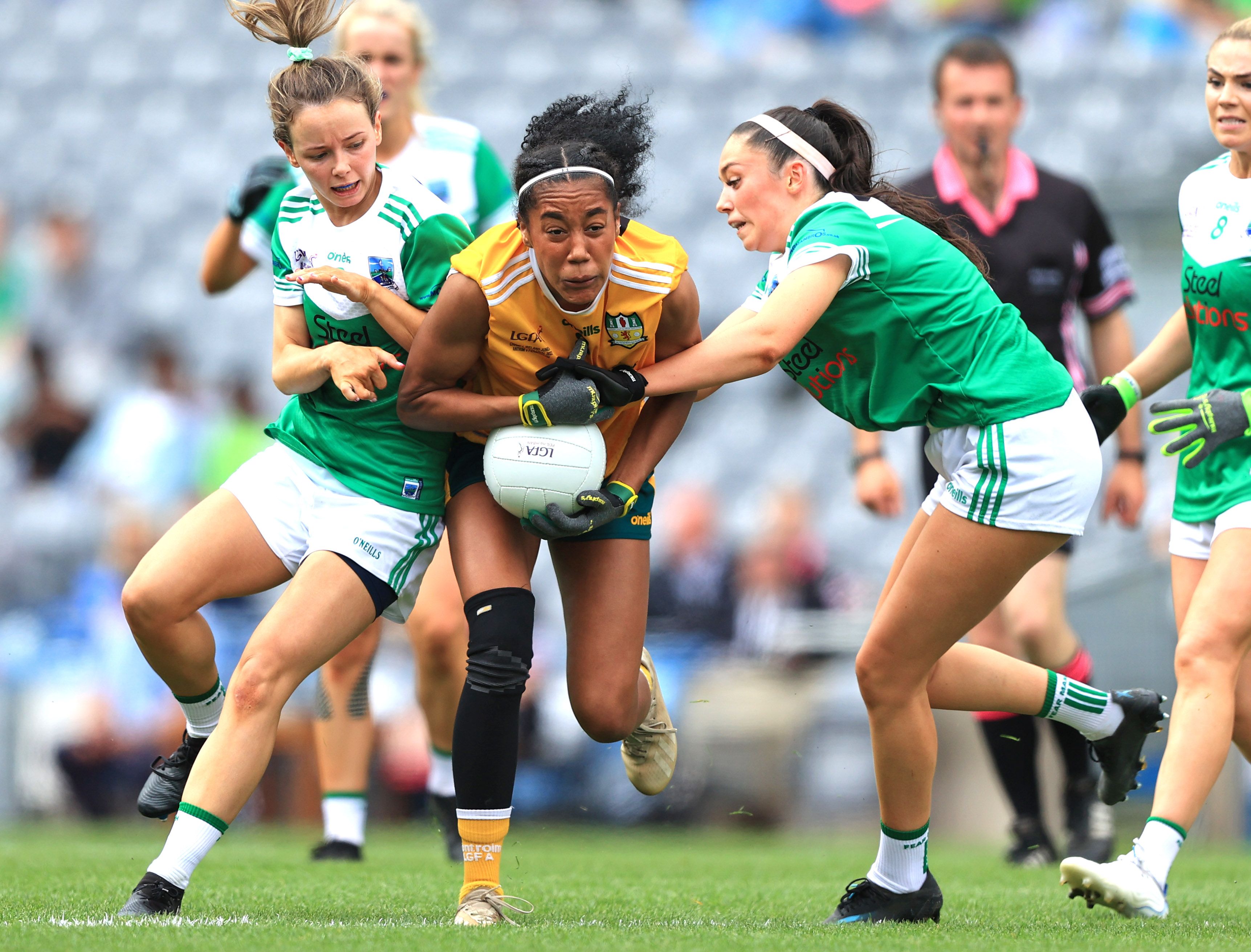 ORLAITH Prenter kicked a free in front of Hill 16 in the final minute to rescue a draw for Antrim in Sunday's LGFA All-Ireland Junior final against Fermanagh.

Just how this came to be will be a source of disappointment for the Saffrons who created more than enough chances over the hour, but their finishing was not what they had hoped as Fermanagh gradually gathered a head of steam in the second period and thought they had it won when Eimear Smyth kicked them into the lead with just over two to play.

Bláithín Bogue led the way for the Ernesiders, kicking seven points in a display for the ages, while she won a (rather questionable) 48th-minute penalty that tipped the balance in her side's favour, yet would finish on the sideline after being sin-binned with five to go.

Her rival for player-of-the-match was Lara Dahunsi who may not have got on the scoreboard, but barely wasted a ball and was a huge driving force for Antrim and then there was Prenter who had a fine game with half a dozen points.

Yet Antrim will feel there were too many who just didn't fire on the day - especially in attack - with 1-13 registered from 35 scoring chances and 22 of those came in the opening period when just 1-7 was the half-time tally.

The trend began early with the first two opening attacks coming to nothing, while Fermanagh were much more economical as Eimear Smyth angled over a second-minute point and Aisling O'Brien raced through to double the lead.

Antrim were finally off the mark in the sixth minute as Áine Tubridy finished a good move and Cathy Carey then found Orlaith Prenter to level.

They took the lead after Sarah O'Neill made the first of two vital intercepts in the opening period - the one resulting in an Antrim breakaway with Prenter finishing and then Grainne McLaughlin announced her arrival.

It really should have been better for Antrim on 11 minutes when Prenter sent Maria O'Neill in, but she shot straight at Fermanagh goalkeeper Róisín Gleeson, while moments later, Lara Dahunsi couldn't direct a loose ball on target but this was more a half-chance than anything.

Fermanagh sharpshooter Bláithín Bogue had a quiet opening quarter, but she more than. made up for that in the second with five excellent points in response to Antrim scores, but one of these was the goal they had been threatening as O'Neill made up for her earlier miss on 17 minutes when Dahunsi - who was excellent in her decision-making in the first period - put the Moneyglass woman through and her finish this time was emphatic, finding the top right corner of the net.

This put Antrim 1-5 to 0-4 ahead but Bogue was weaving her magic at the other end to keep the Ernesiders in tough and back-to-back points late on narrowed the gap to two, but Cathy Carey would have the final say of the half, making up for a pair of wides from frees to split the posts from play and put Antrim 1-7 to 0-7 ahead, although given what they had created, the gap ought to have been much greater.

Another wide was the result of Antrim's first attack after the break, but things took a downward turn soon after as on 32 minutes, Niamh McIntosh was sin-binned on a yellow card but Antrim would get a break immediately as Bláithín Bogue followed in Eimear Smyth's dropping free to palm to the net, but after consultation with his umpires, referee Kevin Corcoran ruled the Tempo woman was inside the small parallelogram and ruled out the score.

In the 10 minutes with 14 players, Antrim actually did quite well and matched Fermanagh with Cathy Carey and Maria O'Neill cancelling out points from Smyth (free) and Bogue.

Grainne McLaughlin kicked a free to extend the gap to four, while Sarah Britton and Bogue with her seventh of the day narrowed the gap to two as McIntosh returned to the field.

Antrim were not pouring forward in the same manner as they did in the opening period with Fermanagh a lot more compact and winning more around the middle, but they continued to stay a step ahead with Prenter kicking a beauty of a score from an acute angle and then tapped over a free, but in-between times on 45 minutes, O'Neill was through on goal again but this time her shot came off the post when goal may have settled this game.

Instead, the turning point came on 48 minutes with Fermanagh awarded that penalty when Bogue was adjudged to have been fouled by Sarah O'Neill when the challenge appeared to have taken place outside the area.

Smyth stepped up and steered her shot low to the net as the Erensiders' tails were now firmly up as they held the momentum, but after a couple of spurned chances, Erin Tierney kicked them level with six to play.

Bogue's afternoon came to an end with five left as she picked up a yellow for her third foul, but despite her absence, Fermanagh engineered what they thought was the winner as they held the ball well, patiently worked it around and Smyth thumped over with just over two to go.

To their credit, Antrim kept their nerve and worked the ball upfield, winning a free that Prenter converted two secure a replay on Saturday, August 13.