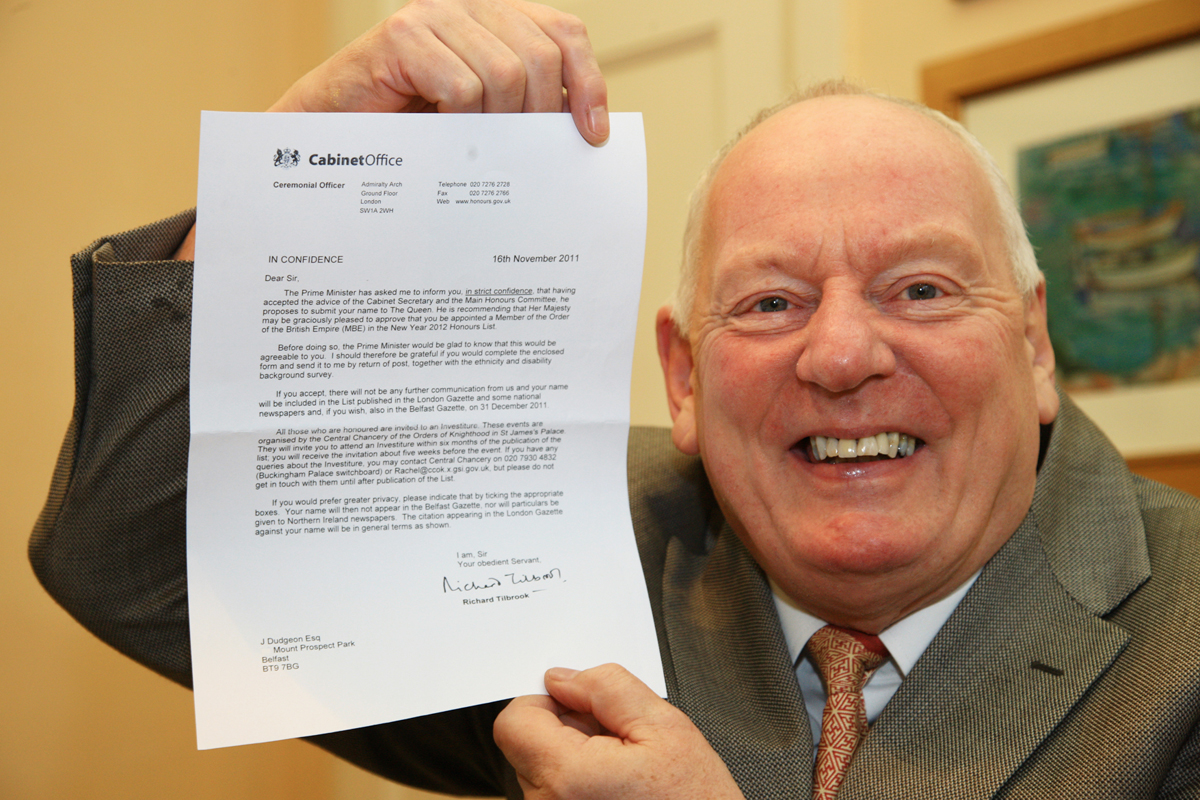 A South Belfast gay rights activist is one of several local people recognised in the New Year’s honours list.

Jeff Dudgeon, who shot to prominence in 1981 when he brought a successful legal challenge to the British Government that forced them to decriminalise homosexuality in Northern Ireland, has been made a MBE for services to the lesbian, gay, bisexual and transgender community here.

The Mount Prospect Park man said part of him had not been surprised by the award.

“When we were campaigning for decriminalisation in the 1970s we all had confidence in ourselves and believed we were equal and not some sub-strand of society.

“So in that extent, once we achieved that equality everything would become possible. It shows how far we have moved on as a society that it has happened and there has been no real kick-up bar from the usual quarters.

“Saying that, back then if someone told us things like civil partnership and gay adoption would become reality we probably wouldn’t have believed that. But I have always thought Northern Ireland was a lot more liberal that its political arrangements suggested.”

Mr Dudgeon is most well known for the Dudgeon vs UK case, which came to a head in 1981 and saw the European Court of Human Rights rule that the outlawing of homosexuality in Northern Ireland violated the European Convention on Human Rights. The case was only the 35th judged by the court and has been cited by judges in similar cases in the Republic of Ireland and the United States.

He said he was delighted with the news of his MBE.

“I got a letter about a month ago from the Cabinet  Office asking would I accept the award. I have a friend who started working for the Cabinet Office a few months ago, so I briefly thought it was a practical joke by him.

“But then I put it away and tried not to think about it until just after Christmas, when I told a few select friends. It’s tough going around for that month not being able to say to anyone.”

Mr Dudgeon, who is a member of the Ulster Unionist Party, also made history when he stood for election to the upper house of the Oireachtas, the Seanad, last May. He was aiming to be the first openly unionist member of the house since the first years of the Irish state but was ultimately unsuccessful.

He is however, still active in gay rights issues in the north.

“I keep an active part in organisations and for several years have given a talk to the Queen’s University human rights law centre about my legal case. It’s important because there are still a lot of changes that need to be made such as the introduction of gay marriage and the ending of the ban stopping gay men donating blood.

“As long as I can help, I will continue telling my story in this city because there is always going to be stuff to fight against.”

Other locals to be awarded honours include Rev Wilfred Orr of Newtownbreda Presbyterian Church, who is made a MBE for services for the community, and state pathologist Professor Jack Crane, who is given a CBE for services to forensic pathology.