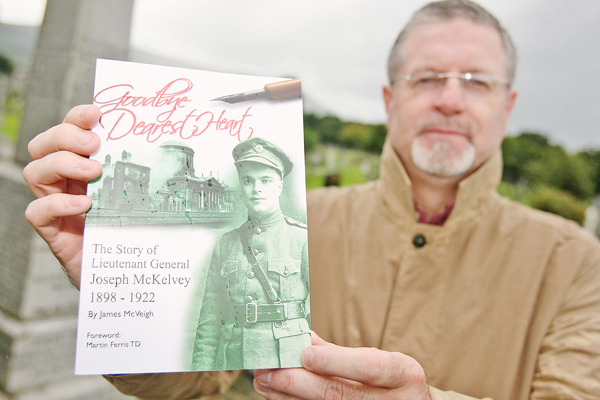 A NEW book that tells the story of legendary Belfast republican Joe McKelvey, who was executed by Free State forces in 1922, was launched in Belfast on Saturday.

Written by Sinn Féin Councillor, and former OC of the IRA in the H-Blocks, James McVeigh, ‘Goodbye, Dearest Heart’ gives readers a closer insight into the life, times and tragic execution of one of Ireland’s most significant and yet, arguably, overlooked republican leaders.

McVeigh said that by retelling Joe McKelvey’s fascinating story, he hopes to give him his proper place in history.

“Personally I have always had an interest in Joe McKelvey as an individual,” he said.

“He was one of the most prominent leaders of the IRA during the War of Independence and then subsequently the Civil War is interesting in itself. I always thought that he was very underrated and undervalued, and there hadn’t been much written about him. Much has been written about the executions and the other leaders who were executed, but there hasn’t been much else written about Joe.

“He was born in Stewartstown in Tyrone, but he came to Belfast as a young teenager, so we can claim him as a Belfast man. In the years that followed his execution, I feel that the significance of his role as a leader has been neglected. Ernie O’Malley, in his book The Singing Flame, said at the time that he didn’t understand why Joe McKelvey was effectively appointed as the chief of staff of the IRA in the Four Courts, other than the fact that he was from the North. To me, that misrepresented Joe McKelvey because he was a much more central and significant figure.

“He had been the OC of the Third Northern Division, which included Belfast, most of County Antrim and parts of North Down – he was only 23 when he was appointed. He was later the assistant chief of staff to Liam Lynch, who was shot and killed by Free State troops in the Knockmealdown Mountains.

“When he was captured in the Four Courts and brought to Mountjoy Jail, Joe was appointed the OC of the prisoners. This idea that he wasn’t a significant leader, or that he wasn’t someone with his own thoughts, ideas and abilities is wrong. Not enough has been done to give him his rightful place and hopefully the book will do that.”

Joe McKelvey lived during one of the most turbulent times in Irish history, but despite his prominent role within the IRA a number of other significant and influential leaders rose to prominence alongside Joe – a fact that McVeigh believes may have contributed to the lack of material written about him.

“He was executed along with two of the most prominent republicans of the time, the most notable being Liam Mellows,” he explained.

“To some extent Mellows and Rory O’Connor overshadowed him. Ernie O’Malley also dismissed him as a token Belfast leader, but O’Malley didn’t know anything about the North.

“Michael Collins had a huge influence over the North. He made relationships with people from the North when they were in Frongoch together, and he almost ran the North himself, but the people who were operating in the South didn’t know how difficult things were in Belfast. Belfast wasn’t like any other part of the country, and I argue in the book that Belfast would have been one of, if not the most difficult, for any IRA leader to command.

“This is a time where we had partition, the setting up the B-Specials, the worst pogroms this country has ever seen. If you think back to what happened twenty or thirty years ago, 1921 and 22 were horrendous for republicans, nationalists and Catholics in Belfast.

“So to be the leader of the IRA in Belfast would have required some courage. For Joe McKelvey, at 23 years-of-age to be the OC of the Third Northern Division during the worst pogroms in living memory indicated how capable, intelligent and courageous he must have been. He was consistently promoted for a reason.”

McKelvey was undoubtedly a dedicated republican, but very little is known about his wider political ideals. He himself wrote very little about his own ideological views, but McVeigh insists that McKelvey firmly belongs to the left-republican tradition.

“There’s not a great deal left behind by Joe McKelvey himself in terms of his politics,” he stated.

“Beyond Irish unity, what did he think? We have to try to surmise that from his association with Mellows. He shared a cell with Liam Mellows when Mellows wrote his famous notes from Mountjoy.

“Mellows was really the inheritor of James Connolly – he was the one republican leader that was socialist. His notes from Mountjoy were basically adapted from the then Communist Party of Ireland’s proposals about a radical socialist agenda.

“Anybody that knows prison will know that he must have discussed those with McKelvey. McKelvey was also on the IRA Executive with him – he was the assistant chief of staff. I think through those notes you can get a glimpse of McKelvey’s politics.

“He was obviously moving very much to the left. CD Greaves, who is referenced in the book, mentions the fact that McKelvey would have had a role in shaping Mellow’s notes. He shaped those ideas, and he certainly would have endorsed them, or Mellows would not have sent them out.

“There are official communications from when McKelvey was an OC, but it would have been nice to have had more information about that. I do think we can safely say that he belongs to the left.”

Joe McKelvey was part of the delegation to the IRA convention in the Manor House in 1922 that formalised the split that led to the Civil War. He was elected IRA chief of staff during the meeting and would later go on to lead the IRA during the battle of the Four Courts where he was arrested and subsequently sent to Mountjoy Jail.

Free State forces executed Joe McKelvey on December 8 1922 alongside his comrades Rory O’Connor, Liam Mellows, and Richard Barrett. His indelible life story is as exciting as it is tragic. The drama surrounding his execution is emotionally striking itself and is a story that immediately grabbed McVeigh’s attention.

“The thing that attracted me to the story was a pamphlet written by Peadar O’Donnell called ‘The Gates Flew Open’ – it was his jail journal,” McVeigh said.

“O’Donnell tells a story, that caught my imagination from the very beginning. The night before Joe and the others were executed – they didn’t know they would be executed at this stage – that night Joe was reading a book called the Gadfly. It’s set during the Italian revolution of the 1840’s, but in the book the main character is executed, but they botched the execution – he is not killed immediately.

“Peadar O’Donnell told a story about McKelvey reading this book, and he said ‘I hope something like that never happens to any of our lads’. But at 2am that night he is told he will be executed.

“There was a firing squad of twenty, with five people meant to shoot each of the four who were executed. For some reason most of them fired at Rory O’Connor. He was shot that many times that some of his clothes burst into flames, and there was a massive panic.

“McKelvey was wounded and conscious. He cried out ‘for God’s sake finish me off’ and the officer in charge of the firing squad went over and put another round in him, but he still didn’t kill him. I took another round to kill. He read that tragic story the night before his own execution and the same thing happened to him.”

Fittingly, all of the proceeds from the book will go directly to the National Graves Association, who are responsible for the upkeep of republican graves, including Joe McKelvey’s.

‘Goodbye, Dearest Heart’ will be available for purchase at the Cultúrlann, Sinn Féin shops across the country and at www.goodbyedearestheart.com