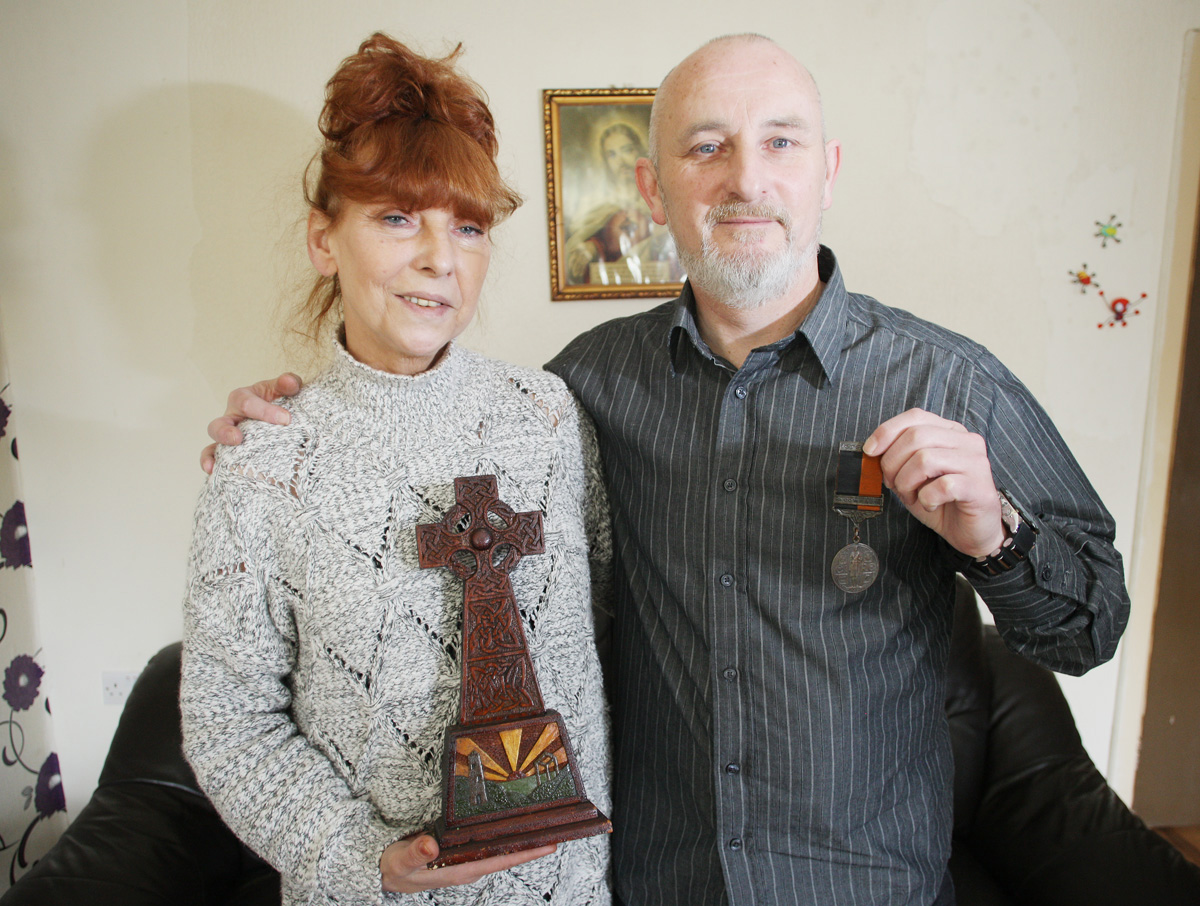 His official war medal shows him as Captain Seamus Nolan and, befitting a war hero, a representative of government was dispatched to pay tribute at his funeral when he was buried in the early 1970s.

Captain Nolan lived his whole life in the New Lodge and could legitimately claim to be one of the few men of military rank to call inner city North Belfast home who wasn’t there under orders or living in barracks.

But Jim, as he was known to his friends, wasn’t a veteran of the First or Second World Wars, and the government representative travelled from Dublin, not London, to pay his last respects because the McCleery Street man had been a Captain in the Belfast Brigade of the IRA and his time spent in service of the state was spent taking on the Black and Tans on the streets of his native city.

Almost 100 years on, in the family home in Victoria Parade, Gerry Nolan shows me the medal his grandfather was presented after hostilities ceased.

Around 65,000 people were awarded the familiar medal with the black and tan ribbon, but only 15,000 of those have the ‘Comrac’ bar attached, which, as Gerry explains, was much harder to achieve.

“Comrac means ‘struggle’ in Irish and the only people to get those had to be involved in active service during the War of Independence,” said Gerry. “This proves my granda was on active service but he never spoke about it.”

Gerry points out the inscription on the back that spells out Captain Nolan’s name and Belfast Brigade battalion number.

Gerry Nolan has spent a lot of time trying to piece together his grandfather’s service record but the old soldier’s reluctance to speak about it and patchy records means a great deal has been lost. Gerry says there is no doubt Jim Nolan was a leading volunteer in the war that lasted from 1919-1921.

“What we know from a letter we have seen is that my grandfather joined the Austin Stack Cumann of the Volunteers in 1918. He was originally in C Company, Belfast Brigade, 3rd Northern Division before moving to A Company in the Second Battalion in 1920, and then D Company in 1921 where he was promoted to Company Captain and attached to the ‘City Guard’.” It is thought the City Guard was an attempt by Michael Collins to consolidate the Belfast IRA in the same way he had done in the ‘Dublin Guard’ as Civil War broke out.

“My father, John, only told me one story that granda told him, and it was about how he and a number of comrades had set up a machine gun post overlooking Musgrave Street to try and prevent the Black and Tans who were stationed there from leaving. He told me they were kept inside for three days before he was able to make his escape.”

Jim’s IRA career in the 1920s was to end in May 1922 when he was arrested and interned as the new Stormont government launched a crackdown on republicans. His name and war record was to ensure he was constantly under suspicion.

“When the Second World War broke out they came to arrest him and he was one of only three republicans to spend the whole of the war interned in Derry. When he was released the Irish Independent did a story on him because he was inside so long.”

While interned, Jim carved a Celtic cross and kept a journal, both of which Gerry and his sister, Philomena McCrudden, now cherish.

Gerry thinks the Civil War that followed the War of Independence was behind that unwillingness to talk.

“My mother’s family had fought in the War of Independence but her family split during the Civil War and her dad had to move to New York and leave his family. Because of that we think granda didn’t speak about it and our mum never mentioned it. It was incredibly tough for her growing up with her father gone.”

Philomena says she thinks that the onset of the Troubles in 1969 meant stories of armed action in previous periods were kept quiet.

“My daddy didn’t want to tell us stories in case he romanticised things and we went down a different path, so I think that’s why they didn’t go into too much depth. Granda died in the 1970s when we were at an age when things were going on and they wanted to protect us.”
The family pride is evident.

“Everyone knew my grandfather around here so we are very proud of him, absolutely,” said Philomena. “Things were tougher up here in many ways during the 20s and it took tough people to join up and hold what precious little ground, socially, they had. I am just overawed by him.”