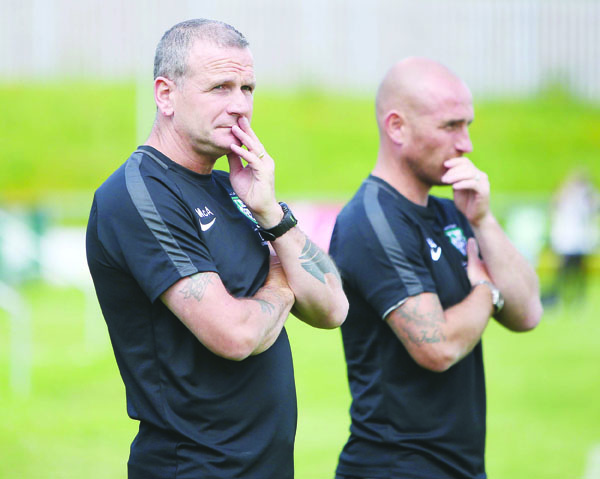 ST JAMES’ SWIFTS will make the short journey to Ballyskeagh on Saturday bidding to dump Lisburn Distillery from the Intermediate Cup and their manager, Packie McAllister, has every belief they can do so.

In the era of social media and predictable soundbites, McAllister offers a refreshingly honest appraisal of his squad and their chances of success.

They’ll be underdogs on Saturday and rightly so with Distillery sitting mid-table in the Premier Intermediate League.

Yet, several big names have already bit the dust in this competition with the likes of Annagh United and Bangor crashing out in the last round and McAllister feels his side are more than capable of progressing to the quarter-finals.

“The Intermediate Cup is something we targeted when we took over. The last two performances in the competition, away to Windmill and away to Ballymoney have been our two best performances this season,” said McAllister.

“Obviously we will give Distillery the respect they are due, but we are going there with absolutely no fear whatsoever.

“Distillery are a team we know. Kevin Braniff has come on board with us from Distillery. He can’t play because he is cup-tied, but has been able to help us in the build-up to the game. We should know about their strengths and weaknesses. We are going up there fully expecting to put in a performance and, hopefully, that will be enough to put us into the next round.”

St James’ have an added incentive to do well in this competition with striker Marty Murray ruled out for the remainder of the season after suffering a broken leg in the 2-0 defeat of Windmill Stars in the second round back in December.

“Because of Marty Murray’s bad leg break, we are also trying to do well in this competition for him as well to give him a bit of a lift,” added McAllister.

“Kevin (Braniff) can’t play, but we have the likes of (Ryan) Catney and Gary Dorrian who have been super for us since they arrived.

“Apart from Kevin and Marty, we’ll be at full strength for Saturday. We’ve been giving a lot of the young lads a chance, boys who hadn’t featured as much and boys from the U18s.

“I have to say, there are a lot of good players coming through at St James’ and, if I think they are good enough, they’ll get a chance.

“Lisburn Distillery is not a place I really enjoyed going up to, even when I was playing. It is a local derby.

“I told the players after last Saturday that we need two really good training sessions this week so we will be going up with no excuses.”

Belfast Celtic, meanwhile, will be hotly-fancied to make it through to the last eight when they host Mid-Ulster Intermediate ‘A’ outfit Richhill at Glen Road Heights.

Stephen McAlorum’s men defeated Larne Tech OB 2-1 in the last round and have won four games in succession since their Irish Cup defeat to Larne at the start of January.

Immaculata caused one of the shocks of the third round when they claimed a 1-0 win over a Bangor side who are sitting third in the Premier Intermediate League.

The Mac, who are sixth in the NAFL Premier Division, will have home advantage when they take on NAFL Division 1A side Grove United.