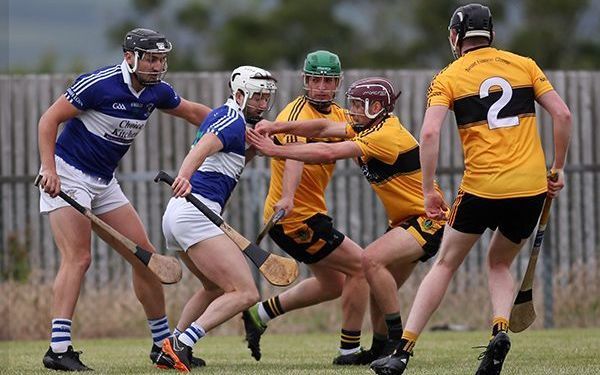 A HAT-TRICK of goals from Killian Jennings inspired Naomh Éanna to a deserved win in this opening game of Division One at Hightown on Wednesday evening.

The hosts were full value for their win and a whirlwind start to the second period, when they bagged three goals, swung momentum decisively in their favour after a first half where they led for long stretches but were hit for two late goals from the visitors to see them trail at the change of ends.

This was a historic occasion for the Glengormley club who were playing in their first-ever top-flight hurling game, yet they looked like a seasoned senior team as they tore into this game, played some excellent hurling and took some fine scores.

Cormac Ross at centre-back drove anchored the defence and drove his team on, with Eoin Conlon buzzing around midfield and landing four from play.

A lot of the play went through Joe Maskey in attack, but it was Killian and Cormac Jennings who did the bulk of their scoring, contributing 3-7 between them.

For the Johnnies, the physical presence of Conall Bohill and Domhnall Nugent caused problems in attack, with Shea Shannon busy around the middle, but they didn't match the controlled intensity of their hosts on the evening and were well adrift entering the final quarter.

This was a lively, entertaining game and it took little time to get going with Bohill catching and scoring a minute in.

A long free from Ross levelled matters before Naomh Éanna hit their first goal of the game on five minutes when Killian Jennings pounced on a break from a long delivery to crack home.

The Johnnies hit back with a Donal McKernan free and point from Padraig Nugent, but the hosts were tearing into this game and points from Ross and Cormac Jennings restored their goal advantage.

They had a huge penalty shout turned down on 14 minutes when Daniel Lowry took a pass from Darrach Cooper and seemed to be bundled over two yards out with the goal at his mercy, but referee Mark O'Neill deemed it a fair challenge and St John's cleared.

The hosts remained in the ascendency for the most part and led 1-7 to 0-6 as the game moved towards half-time but with plenty of stoppage time due to the water break, there was ample opportunity for St John's to turn the game around and they did just that.

McKernan first tapped over a free before a long delivery from Shea Shannon say Domhnall Nugent - now deployed on the edge of the square - get a flick to send the sliotar to the net and level the game.

After an exchange of points, they got a second goal as McKernan weaved in, got a shot off that was saved by Martin Curran, but Bohill gathered the rebound and fired to the net.

A Cormac Jennings free saw Naomh Éanna have the final say of the half, but they trailed 2-8 to 1-9.

The hosts wasted no time in turning the game their way in the second period as they came out firing with Daniel Lowry pointing a minute in and then Killian Jennings found a gap on the left to drill low into the net.

A third goal arrived seconds later a long free from Jennings broke to Darrach Cooper who blasted high into the net and an Eoin Conlon point straight after saw them move into a 3-11 to 2-8 lead in the space of five minutes.

St John's were handed a lifeline straight after when a chop down by Eddie O'Connor saw them awarded a penalty and Domhnall Nugent found the net from the award.
This would be cancelled out instantly as from the poc-out, Jennings raced through and blasted home his team's fourth major.

They had opportunities for more with Cormac Jennings in and while it appeared he was pulled back, swung a boot at the ball but watched it come off the inside of the post and somehow stay out. Conlon and Cormac Jennings did raise white as the hosts led 4-13 to 3-9 at the water break and well on their way to the two points.

They were able to manage the game out in the final quarter comfortably, hitting two of the next three points and while Nugent and Conor Carson struck for late St John's points, these were mere consolation as Naomh Éanna claimed a historic, but fully deserved victory - their first in top-flight hurling at the first time of asking.